During the Festive Season, two sections of the Canadian Pacific Holiday Train ride the carrier's rails,  providing a rolling theater, the purpose of which is to bring citizens trackside to hear the music and lend monetary or in-kind support to local food banks.  The train only calls at lineside communities where someone has made a case that the local population is hurting.  This year's calls include Wauwatosa, Wisconsin, which outwardly looks like a prosperous older suburb of Milwaukee.

The annual visit of the train is an opportunity for parents to get their kids involved in being helpful, with the youngsters often given the responsibility of dropping the money in the collection box or handing the bag or box of food to the food bank's staff.

Then, as at Sturtevant, Wisconsin, last Friday, there is often a chance to play before the show starts. 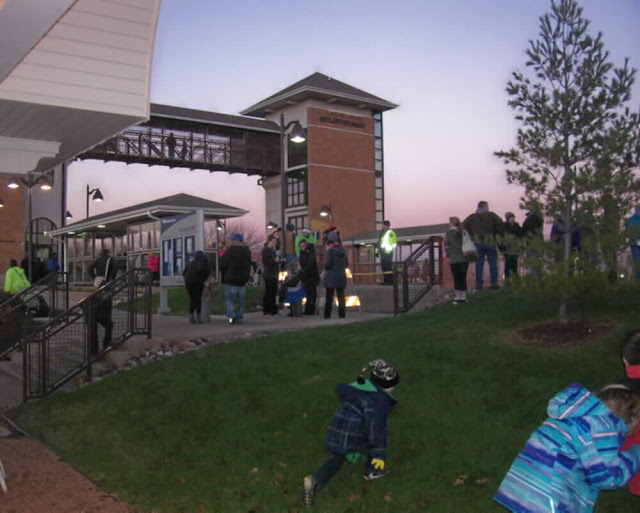 When the weather is good, the embankment is made for rolling, or doing somersaults.

I was last at Sturtevant in 2007, when the embankment was suitable for sledding. 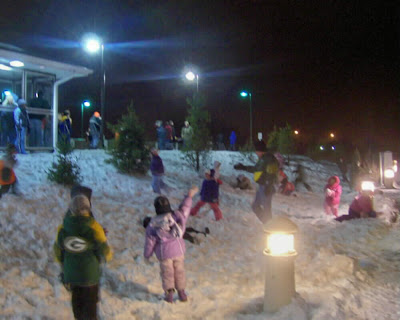 There's one constant in Packer Nation, the enthusiasm for a playoff push in December.

But the railroad does not shut down for the Holiday Train, which led to a change of plans by the Canadian Pacific dispatcher, and to a change in my attempts at photography.

The train was due at about 5.30, and the headlight and the decorated locomotive were in view south of the station, where the train stopped.  And waited.  And then whistled a reverse move.

That permitted the dispatcher to move a long freight train through, on the track more suitable for viewing the show.  That train had the Norfolk Southern heritage Wabash unit trailing.  Perhaps some trainspotter with a better camera location got a good picture.  And the Holiday Train performance began just before the 6.08 Hiawatha departure for Chicago was due.   That's the train I had been planning to catch, and there's not a lot to do in Sturtevant between trains.  The local movie theater had promotional efforts as part of the show, but the running times of movies that time of the evening don't harmonize well with the train schedules.

I got on that train, which loaded and departed from the east platform, then crossed over at the interlocking south of the station to clear a path for the northbound train due at 6.18.  My southbound train ran around the freight train that the dispatcher absolutely, positively had to get through Sturtevant before the show in the west siding at Wadsworth.

Thus, we'll fill in the pictures of the Holiday Train itself from eight years ago. 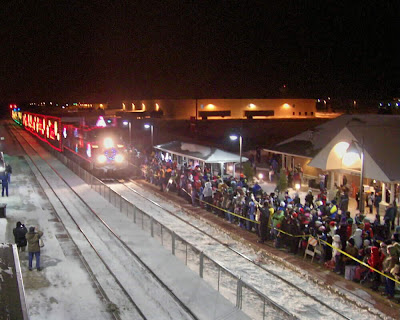 You'll notice in the daylight picture from this year, and from this photograph, that the authorities do not prevent spectators from using the overhead walkway to observe and to take pictures.

And the authorities were present.  Perhaps that is as reassurance.  But local law enforcement, and probably railway agents, and Transportation Security personnel, and Heimatssicherheitsdientspolizei were all on hand.  And whether the audience pays as much attention to national affairs as I, or much of the internet community, do, or not, at some level everyone there understands on some level that the reassurance is not account actionable intelligence about the Salvation Army or a local Christian Identity militia wanting to liberate the food truck, or the Little Sisters of the Poor coveting the donation barrels.
Posted by Stephen Karlson at 10:18