ALL THOSE INDIGNANT YOUNG SWINE.

The first time around, the Sixties militants touched off a major culture war, but perhaps there were major things to be aggravated about. 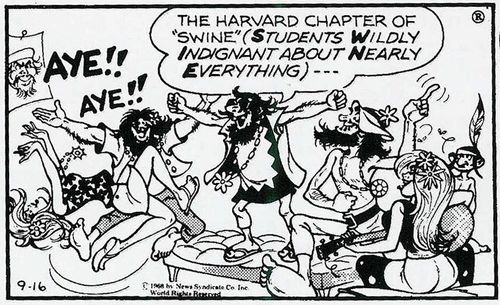 Al Capp excerpt retrieved from WFMU's Beware of the Blog

The surviving leftovers of that era still in the academy are wildly indignant about fried chicken.


Recently, referring to the plague of campus hoaxes regarding rape and race, capped off by the ruckus at Oberlin College because of the cultural “disrespect” shown by serving General Tso’s Chicken with steamed instead of fried rice, I was asked by a well-educated friend, “how did academia come to this sorry pass?”

Does it come as any surprise that when you question coherent beliefs of any kind you get incoherence?


What’s puzzling is why such a wide variety of protests has recently broken out across American campuses.  Postmodernism seemed to have been beaten back in the early 21st century. The embarrassment of the Sokal hoax (the pomo magazine Social Text printed as genuine a spoof claiming to deconstruct gravity); the revelations that two of the key influences on postmodernism, the philosopher Martin Heidegger and the literary critic Paul de Man, were deeply implicated in European fascism; and the defection of literary critics suggested that postmodernism was on the rocks or at the very least had become old hat.

But while pomo might have become old hat, the selective process whereby the radicals of the 60s had become the college administrators of recent years was part of a development whereby a narrowing number of novitiates were looking to take their vows for the priesthood of the humanities. For many years, students of moderate or conservative views and those perhaps looking for a more promising path to the future chose other careers. But the radicalized rump was energized by the Ferguson protests and motivated by the sense that the dwindling days of the Obama years impelled the need for immediate action.  The upshot has been the return of S.W.I.N.E’s hijinks as academia or at least an increasingly cartoonish section of the humanities seems determined to discredit itself.

And it makes for better spectacle than a circus forum set up for public radio types.
Posted by Stephen Karlson at 15:35