The revenue numbers are a big disappointment because the printers were supposed to follow the time tested and much beloved razor blade model with most of the sales coming from resin filament. The markup on the filament in most cases is a holy grail level 1000% – 2000%. The fact that 3D systems, the pioneer of additive manufacturing, couldn’t make this work is bad news for the industry as a whole.

The machines do go through a lot of filament. 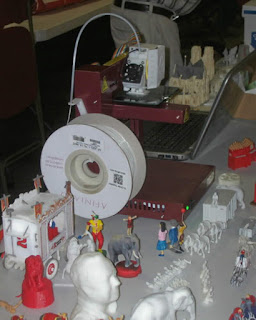 Before a single elephant can be printed, though, somebody has to produce the master data file.  Getting this right is not trivial, as several model railroaders who have experimented with the technology have informed me.  That might be where the money is.  "One business model for 3D printing that seems to be working isn’t selling the devices but making and selling the final product." That is, the rapid prototyping company sells snippets of its learning curve to clients, at a price less burdensome than the expense involved in do-it-yourself.
Posted by Stephen Karlson at 13:38

If you are selling the machines for rapid prototyping, then the price of the resin can stand to be high. If they are to be used to actually produce product, then materials costs become pretty important.

Also, I think a lot of the hyperventilating about 3D printing is based on the mental model of these machines as "replicators", which is far from true...even if you could economically print a replacement crankshaft for your car, it would probably be nice to have it heat-treated before putting it in service.

Probably the biggest production application for 3D printing is in fabricating industrial parts which are otherwise very labor-intensive, as with what GE is doing with jet engine fuel nozzles that previously required something like 18 welding operations.

Indeed. In the model railroad and circus modelling circles, it's the replication, rather than the creation of better masters for molds, that's getting a lot of the attention. That's where hobbyists are confronting that steep learning curve. But the learning curve with replicators promises to be interesting. No "zero marginal cost" production for example, but a high return on human capital for people who understand both the programming and the tool-making trades.