A SPECIAL CATEGORY FOR MISSOURI'S TRUSTEES.

Not too long ago, we noted another rogue's gallery of illiberal institutions of higher learning.  Missouri at Columbia did not make the cut, although departed president Tim Wolfe made an earlier list of worst college presidents.

The University of Missouri's Board of Curators recently voted to fire assistant communication professor Melissa Click.  You may remember her. 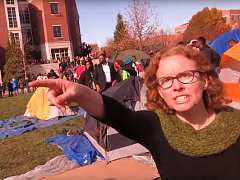 The way in which the board proceeded, however, is another administrative usurpation.


The board voted 4-2 to dismiss Click. [Board Chairwoman Pam] Henrickson said she voted against the decision, but did not say why when asked. She said the board had been hoping that a faculty member would file a complaint against Click to be reviewed by an elected body of faculty members, according to university policy. But when no faculty members filed such a complaint, she said, the board moved forward on its own.

It has long been my position that misbehaving faculty members be disciplined or brought before a for-cause hearing through established channels.  Arbitrary procedures for getting rid of troublesome leftists, whether they are Melissa Click or Ward Churchill or Richard T. Ely are arbitrary procedures, procedures that can be unleashed against individuals with less use to the professional protest communities.


If Dean Curly and Provost Moe and President Larry say nothing about a dishonest faculty member when all that dishonest faculty member is doing is raising Colorado's retention rates in the Department of Cooling Out the Mark, they have forfeited all right to say anything about it when the evidence comes to the attention of individuals less willing to look the other way at the identity politics fraud being committed in prominent universities?

But Department Head Shemp or Dean Curly or Provost Moe all have standing to review faculty conduct, whether, as is the case with Ms Click, in a tenure review, or in the case of Mr Churchill, in a dismissal-for-cause hearing.  Thus Ms Henrickson's statement suggests something else at work.  A Chronicle of Higher Education report suggests it's cowardice.


The news of Ms. Click’s firing may be a step toward repairing the university’s strained relationship with the General Assembly, said State Rep. David Wood, a Republican and chairman of the Joint Committee on Education, in an interview with The Chronicle.

"I support their move," said Representative Wood, who oversaw a recent committee hearing at which several legislators asked university officials about the terms of Ms. Click’s contract and what actions they were taking to respond to her actions as caught on video.

Mr. Wood said he didn’t think legislators were necessarily intent on having Ms. Click fired, but they wanted to know if the university was taking steps to make sure a similar occurrence didn’t take place in the future. "Her actions were not justifiable in any way," said Mr. Wood.

Intrusive legislatures are an occupational hazard for the governing boards of state universities.  Sometimes, the intrusion is over controversial faculty members who are doing something much more subversive than anything Melissa Click ever did.  It's called teaching the controversies.  And when the controversies are about socialism, and the legislature wants the university to get rid of Richard T. Ely, there is only one possible response.


WHATEVER MAY BE THE LIMITATIONS WHICH TRAMMEL INQUIRY ELSEWHERE, WE BELIEVE THAT THE GREAT STATE UNIVERSITY OF WISCONSIN SHOULD EVER ENCOURAGE THAT CONTINUAL AND FEARLESS SIFTING AND WINNOWING BY WHICH ALONE THE TRUTH CAN BE FOUND.

Although I still maintain that academic freedom too often serves as cover for trendy grievance scholarship, and that the diversity boondoggle is creating an academic environment devoid of intellectual diversity, none of which is consistent with the public interest, I must also object to Missouri's board of curators conceding powers to a legislature that will almost certainly be used in a situation where curricular integrity, rather than excessively zealous protesting, is at stake.
Posted by Stephen Karlson at 18:05