The BBC offers analysis of the Bad Aibling interurban collision.  In short, a dispatcher mistakenly opened the track to the two trains. 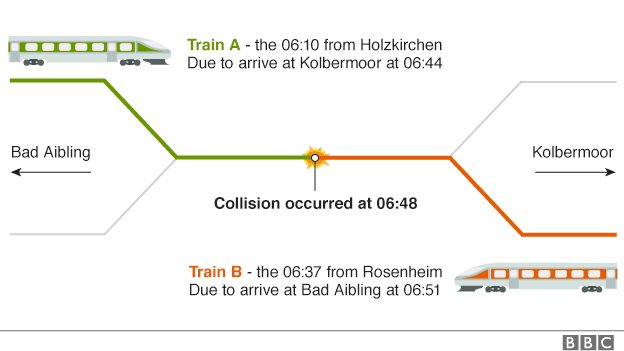 The diagram appears to be in error, given what I learned in a discussion at The Local Germany.

Without any safety appliances, archaic superiority of train rules are sufficient to preclude a crash.  If Train A is the superior train, train B must wait at Kolbermoor for train A.  If train B is the superior train, train A has authority to leave Kolbermoor, with train A obligated to clear for train B at Bad Aibling or, if it is sufficiently late, at a siding closer to Holzkirchen.

Under train order operation, the dispatcher can change the location of the meet.  But he must notify the train that is losing its right first.  With centralized traffic control, he is only able to change the location of the meet once train A has accepted the signal at Bad Aibling by changing the signal at Bad Aibling to STOP, then waiting for the machinery to allow him to clear a signal at Kolbermoor.  Dispatchers and operators refer to this as "running time," the purpose of which is precisely to prevent somebody from doing something rash and creating a collision.  The usual running time interval is five minutes; for the line in question delaying a train at Bad Aibling for the purpose of resetting the meet loses more time than simply letting the train proceed to the meet at Kolbermoor.

What none of the reports explain, thus far, is the way in which the dispatcher overrode whatever safety appliances were in place.


The track was fitted with an automatic braking system. The system is meant to alert the driver when a train is approaching a red light. If the driver does not respond quickly enough, or if the train goes through the red light, the brakes are activated.

Officials say the system had passed safety checks and the investigation did not find evidence of any technical malfunction, pointing to the actions of the controller.

It's possible that the motormen can acknowledge the signal without reducing speed, under some types of train control. I'm still looking for a more complete description of the safety appliances in place on this line.

Two trains, running at track speed on the strength of a manual override?  The actions of the dispatcher and the motormen would astonish a Harry Bedwell or an E. S. Dellinger, whose short stories often involved the Railroad By The Book official tangling with the agent or operator whose corner cutting might have proven fatal, or might have demonstrated a capability for improvisation when it's necessary.


Trains are equipped with layers and layers of safety features. But even the very last available precaution seems to have failed in this case.

Officials say they assume both train drivers also had no visual contact before the crash, as the site is on a bend, so they did not apply the brakes manually.

Analysts say there now appears to be a case for making restrictions on manual overrides to the automatic safety systems tighter.

Every line in the Book of Rules has been written in somebody's blood.  Thus it will be in Germany.

A manual override to automatic safety systems is something not to be taken lightly, which is why procedures to do so involve additional safeguards such as running time, or granting authority to pass the signal at restricted speed.
Posted by Stephen Karlson at 23:39