I HAVE SEEN THE FUTURE, AND IT SUCKS.

Once upon a time, wide, limited access highways, and high-rise office and apartment blocks, perhaps with parking on the lower levels, were the very model of modern living.  The idea started with the General Motors Futurama exhibit at the 1939-1940 New York Worlds Fair. 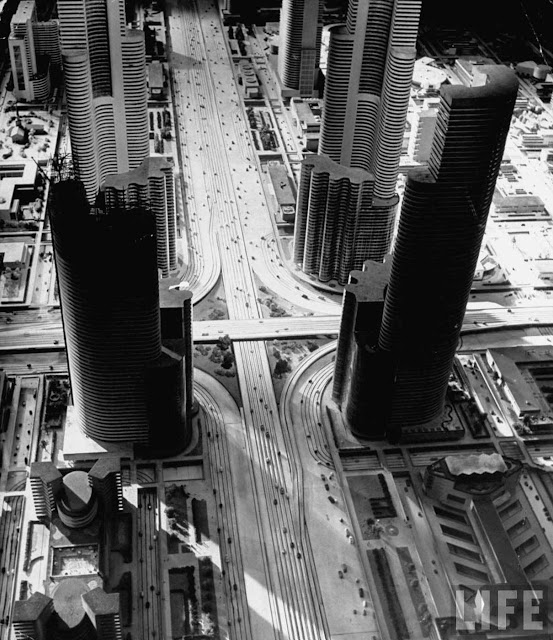 The notions of better living through private transportation and broadly shared prosperity combined with the Technocratic Imperative in Building that Better Future, something that was popular in those late-Depression days.


[Display designer Norman] Bel Geddes vision of the future was exclusive and evasive, there were no slums, the poor were not represented, the miniature scale made little provision for human relations and the rural villages were centralized around a church. (Marchand 1992:40). In Bel Geddes script for the audio accompanying the ride explicitly states that “whenever possible the rights of way of the express city thoroughfares have been so routed as to displace outmoded business sections and undesirable slum areas” (Cogdell 200:230). In a contemporaneous review by Stuart Chase he found Futurama to be a “civilization which had been cleaned, garnished, and ordered. Waste, clutter and ugliness were out of it.”(Cogdell 200:230)

Yeah, that turned out so well, but General Motors were able to push the same rent-seeking vision at the 1964-1965 Worlds Fair, which closed a month after the Watts riots suggested social engineering the undesirable slum areas away did not have the consent of the people so cleared. 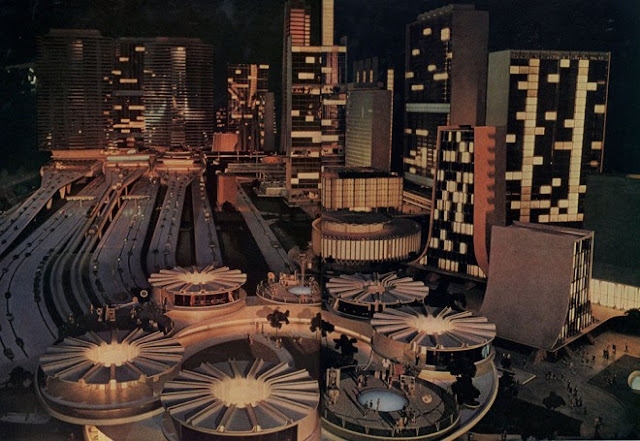 Those look like Chicago's notorious outside ramps in the middle of that expressway.  They work well on a model with spacing-controlled slot cars.  Less so in practice, particularly if the Hubbards Cave area is full of trucks.

The buildings anticipate the Jetsons, in which the orderly traffic in the cartoon flows in three dimensions.  If you're the only person with a flying car, you're above it all, but mass-produce them ... 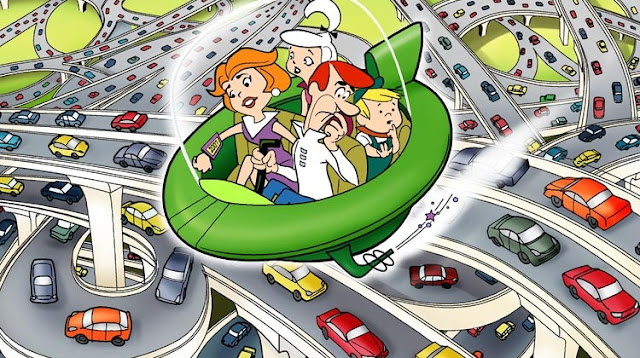 These days, however, people are conversant enough with the Law of Peak Hour Expressway Congestion to understand that running a Futurama-width road through a city doesn't deliver the benefits.  It's Soviet-style queuing, with the concomitant frustration, and the aesthetics don't look so good. 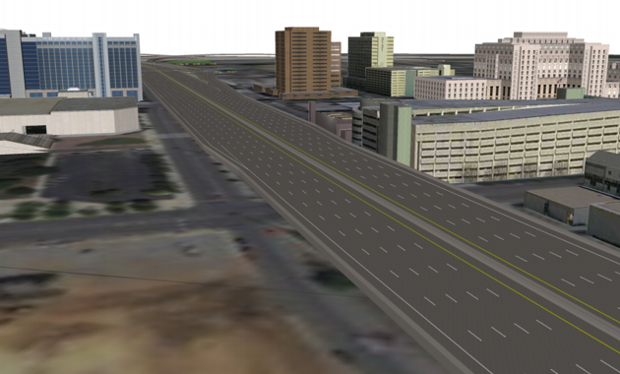 Futurama's builders, at least, put in lots of futuristic high rises (Trump Towers, anyone?) in vacant spaces.  Here, a wider road is drawn in through the existing road corridor, with the existing collection of vacant lots, a parking deck, and Birmingham's current buildings treated as givens.  "In Alabama, the highway department is proceeding with the plan to expand I-20/59, even though business groups have come out against it and a nonprofit has filed a lawsuit against it."  The rent-seekers must have their rents, whether the public interest is protected or not.
Posted by Stephen Karlson at 12:52