Reason's E. N. Brown characterizes the efforts of secular European countries, most recently with the "burkini" bans along France's coastlines, as "a wave of non-religious fundamentalism, in which the allegedly patriarchal print of Islam and other faiths must be destroyed by the righteous benevolence of public officials."  Perhaps those non-religious fundamentalists are acting for the most secularly progressive of reasons, namely freeing the Oppressed from their chains.


That is not the culture of France, say leaders, and hence its zero-tolerance policy for such symbols of female oppression.

It's a silly scheme for several reasons. For one, it's unlikely to make the lives of actual oppressed women any better; for those whom husbands or families force headscarves and burquas in public, a ban on these items will simply mean many Muslim have to forgo the beach and other public outings entirely. (It's also unlikely to inspire goodwill among Muslim communities already alienated from mainstream French society.) For another, it's contradictory: in the name of women's equality, France is literally forcing women to wear less clothing than they're comfortable in and passing laws that target female attire but not male.

Margaret "University Diaries" Soltan is thinking along similar lines:  there's a strand of Islamic practice that's male chauvinism codified, but there's also a tension between boutique multiculturalism (and its toxic accomplice, authenticity) and freedom of choice and association.


But it is now really the intellectual responsibility of people who defend a cultural status quo in which women are visually annihilated to examine with honesty and humility how it is that they came to be so out of step with the instinct of vast majorities in almost all of the European countries where the status of fully veiled women begins to become a matter of law.

It's possible that by taking too hard a line against looking like a Third Worlder in public, the non-religious fundamentalists are giving the new arrivals from the Third World reason to embrace their practices more fully.  To quote Ms Brown, "Setting our Western gaze on women in hijabs and seeing only oppression isn't some new-fangled feminist awareness, it's a perfect extension of imperialist legacies." Yes, the French were attempting to Europeanize Algeria in the late 1950s. How well did that turn out?

Assimilation begins with live-and-let-live, and it emerges as the youngsters wonder why they have to draw attention to themselves by looking like Third Worlders.  Here's Ms Brown's example from the States.


One only need look to the story of Catholics in America to see we got it right: once an outcast, suspicious, and non-assimilating crew, Catholics are now no less mainstream in America than apple pie. It turns out that when you let people assimilate at their own pace, picking and choosing from the dominant (liberal, secular) culture and their own smaller communities as they go along, most people will eventually begin to blend the two. The process can work in reverse, as well, with a minority group shifting dominant cultural views through time and tolerance—something we've seen in America over the past few decades when it comes to same-sex relationships and rights.

The lesson here for secular, socially-liberal Americans (and one I'm afraid few progressives pillorying France right now will entertain) is not to be like the burkini banners and other non-religious fundamentalists when it comes to spreading "tolerance" in America.

Here's an instructive car-card, in preservation at the Illinois Railway Museum. 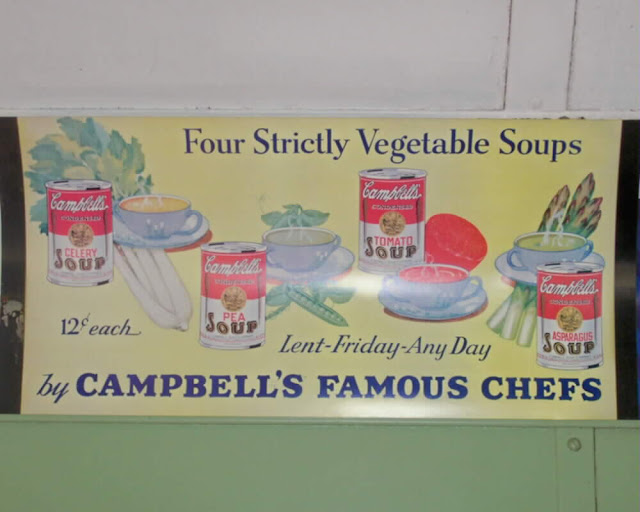 M-m-good, and marketing to Chicagoland's Catholics is good business.  (How long ago was tomato soup 12 cents a can, and what does that translate into in 2016 dollars?)

Thus, though, does the Friday fish fry morph from a lesser sacrament to a festive tradition, all over Wisconsin, and in adjoining portions of Illinois.  And we've looked at the evolution of Sunday from the Puritan ritual in which only milking cows is permitted to the German tradition of a post-worship keg of beer.  "The grandchildren of the migrants will buy into the common culture, given the proper inducements."  Picking on Grandma for wearing her babushka, or her hijab, isn't the proper inducement.
Posted by Stephen Karlson at 12:00