COLERAIN IS THE NEXT FERGUSON.

Strong Towns frequently feature communities that were once vibrant manifestations of car culture and suburban affluence.  Many of them, including Colerain, Ohio, a Cincinnati suburb, have turned into swamps of public squalor amid private destitution (to tweak an old J. K. Galbraith phrase.)  It goes beyond the downscale people attempting to cross the butt-ugly stroads, which is the focus of the post.  "What are the options for the folks who find themselves standing on the side of Colerain Avenue? They can work part time at one of the fast food outlets. They can scrape by month to month with payday loans and pawn shop transactions. Or they can join the military which is by far the best career option, although it comes with certain risks."  The author's thesis, consistent with Strong Towns writers' emphasis on the suburban growth ponzi scheme, is that these once-promising bedroom suburbs have become obsolete and the strip malls and tract houses have trickled down to people less capable of taking care of what they have.


Back in the 1950’s, Colerain Township was the recipient of a wave of respectable prosperous families who were crossing the municipal line out of Cincinnati. They drove through Mount Airy Forest and left behind high taxes, high crime, lower quality public services, old unfashionable buildings, and poor black people. If you couldn’t afford a brand new home and a car… you clearly didn’t belong.

The schools were new. The shopping centers and office parks were new. Tax revenue poured in. Police, teachers, and administrators were hired. Parks were created. Libraries opened. Life was very good.

Fast forward sixty five years. Everything that used to be shiny and new is now aging – not all of it well. There are now decades of accumulated salaries, pensions, and health care obligations for municipal workers, past and present. The roads, water pipes, lift stations, sewerage treatment plant, and public buildings are all in need of expensive maintenance. Tax revenue is in decline. This town like nearly every other town of its vintage is functionally insolvent.

There are now newer suburbs farther out where the homes are larger and the neighborhoods more exclusive. Mason and Beavercreek are where the prosperous families are migrating to these days. Young, educated people and wealthy empty-nesters are heading back to rapidly reviving inner city neighborhoods in Cincinnati. Colerain Township now has declining property values and is experiencing an influx of lower income residents. In the big scheme of things this post war suburb was disposable.

What we see are the errors in suburban development, as summarized in one photograph. 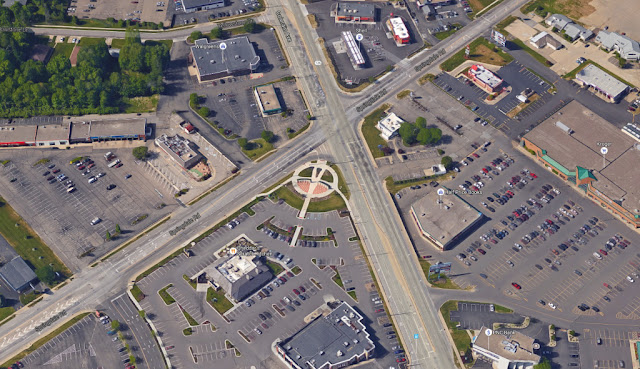 The colorful circle at the crossing is a recent war memorial.  The author wishes to emphasize the difficulty of stopping to reflect at the memorial, or to pause while walking to the pub or the coffee house or the toy store.  And the retail spaces elsewhere seem lost amonsgt those vast, empty parking craters.

Perhaps Colerain is doomed, thanks to a combination of the blue social model and misinformed intelligent design.  That's what author Johnny Sanphillippo suggests.


The memorial park is sitting in a sea of low-value surface parking lots, empty buildings, and buildings that are only occupied because they were bribed into existence with subsidies and tax abatements to keep up appearances. Meanwhile millions of dollars worth of public infrastructure sit underutilized.

Ultimately, Colerain has two options. It can reduce its physical infrastructure and default on its promises to municipal employees, which is the de facto path most post-war suburbs are on. Or it can add significant amounts of higher value private development to the existing public infrastructure chassis to generate more revenue. There are no other options.

I doubt the good people of Colerain are interested in transforming their old parking lots and dead strip malls into a thick Main Street downtown full of mixed-use buildings with shops on the ground floor and offices and apartments upstairs. I don’t think they’d even know how to build that sort of thing if they tried. They’re too obsessed with parking ratios and flower beds that look like the prosperous suburbs they no longer are. I’m not even sure there’s even a market for that kind of thing in this location. So I see continued decline and more desperate attempts at resurrection by pure faith. So be it.

And why, Mr Sanphillippo, are you relegating the current residents of Colerain to the Slough of Despond?  With the disappearance of the middle class upward and downward, are you arguing that there is insufficient demand to rebuild the commercial spaces as the kind of thick urban spaces that sell well, and to convert some of the empty spaces and some of the residential sites just off the main roads into larger lots with larger houses?

Or are we getting more Fergusons and fewer Hinsdales because there's too much prole drift, and too much deconstruction of the mores of the upper middle class?
Posted by Stephen Karlson at 14:37