Basketball highlight tapes are generally about the scoring, and there has been plenty of that from the Northern Illinois women.


"Every high school kid," second-year coach Lisa Carlsen said, "when they walk into the gym, they shoot the basketball. They don't walk in and do a defensive slide.

"But it's a lot of work. Everybody wants to play up-tempo, but not everybody understands the work. We are intense running in the offseason. The kids joke all the time that they hired a track coach, not a basketball coach.

The way to get an up-tempo team in trouble, though, is to take them out of their comfort zone. That's what the Wisconsin men's teams have been demonstrating for years.  Or sometimes, as we noted a few weeks back, nothing works right and an objectively weaker team wins.

Over the weekend, Western Michigan, a middle-of-the-division team, came to town for Alumni Weekend, or Winter Family Days, depending on which branch of public affairs you talk to, and a number of past players who were pretty good at lighting up the scoreboard were watching.


"You see how many points they score? I don't care what level basketball it is, you have to respect that," said E.C. Hill, who became the last Huskie to be named an All-American when she earned the honor in 1993-94. "They're highly skilled. I think maybe we made them a little nervous, but they got the W. When you're scoring 100 points and people are scoring 30 points, they make you watch them.

"No disrespect to the other coaches, but everybody likes offense. Everybody likes seeing you put the ball in the basket. That's part of it. When they score 100 points and they're first in the MAC, you got to go. You want them to knock our banners down."

It's a lot of work getting there.


In just her second year as the head coach, Lisa Carlsen not only has secured the Huskies' first winning season since 2006-07, but has the players and fans – and alums – eyeing a potential trip to the NCAA Tournament. If there's anybody that understands the excitement of playing a high-scoring style of basketball and the difficulty of turning around a program, it's Carol Owens.

In just her second season, the Huskies went 19-12 and it's the last time they've had a winning record.

"It is extremely hard and I'm sure she's coached a lot of different teams and knew what style fit this team," said Owens, who went 66-81 in five seasons at NIU and is now an assistant coach at Notre Dame. "I just like that (this season's team) can score. It reminds me of when we played. We averaged 90-some points per game. They do it here.

"I think they play so well together and so unselfishly and that kind of reminds me of the teams that we had. Nobody cared who the leading scorer was this game or that game, they shared the ball and wanted to win."

I've noticed that these players seem to be feeding off their teammates successes, and they're enjoying being out there.  No stage fright, either, with all those past stars looking on. 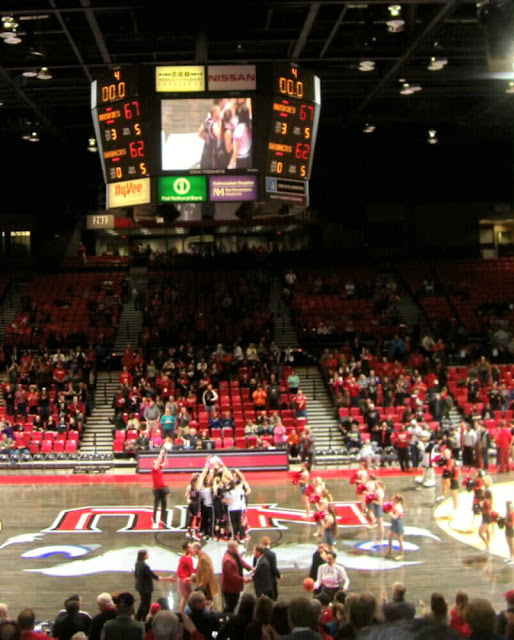 That's a little off the scoring pace of most games.  There's also a fourteen-point second quarter deficit erased up there.


It wasn't the best outing for a Huskie offense that averaged 89.1 points per game heading into the day – they trailed 50-45 heading into the fourth quarter – but they took the lead for good on a 3-pointer by [Cassidy] Glenn to put them ahead 62-59 with 2:01.

"This was a nice win, but it really pushed us out of our comfort zone," [Ally] Lehman said. "Usually against all the other teams, we've been able to drive and kick and hit the three and they pushed us to try something else."

The Huskies trailed 57-53 with 4:07 remaining in the game heading into a media timeout. [Courtney] Woods said that this year's Huskies felt differently in the huddle than in years' past.

"I think it looks different this year because we feel that we deserve to win games," she said. "This year we're winning a bit more, so we feel like we're good enough to toughen those games out. ... I never thought we weren't going to win that game. I think we were just waiting and waiting and when Cassidy made that three, it was a switch and we were in position to win it."

They responded with a 10-2 run following the timeout to take the lead for good.

It's making for an entertaining winter.
Posted by Stephen Karlson at 23:02