THE HAKLUYT ARCHIPELAGO OF DEPLORABLES.

The back story of Nancy Isenberg's White Trash.  The 400-Year Untold History of Class in America, today's Book Review No. 7, is that compelling people to work on projects that don't turn out well has been a thing for rulers, even under circumstances, such as those prior to futures contracts, insurance, and steam power, in which you'd think nobody lacks for work. 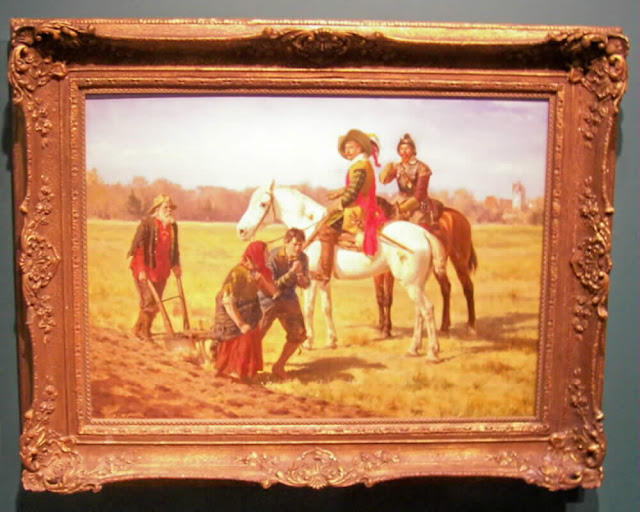 Werner Schuch, Two Riders of the Thirty Years' War and Peasants, 1881
In the collection of the Grohmann Museum, Milwaukee.

In the Stalin era, people might have been reduced to plowing by hand in this way, and Atlas Shrugged envisions such a fate in Wisconsin as the creatives go on strike, and the looters and moochers wear out the existing capital.  But in the era of European colonization of the Americas, the cousins Richard Haklyut the elder and younger perceived England as full of idlers and useless eaters, and the press-gangs could not send all of them out to sea, and the work-houses were all full.  That despite there being many situations such as the one illustrated, where additional effort would appear to be productive.  The Hakluyt Archipelago, then, is the Americas and Australia as work-houses.  Emma Lazarus welcoming the "tempest-tossed" and the "wretched refuse?"  That came later, but the die had already been cast.

From the conception of a work-house, the notion of white trash ("waste population," in the locution of the era), and social stratification, complete with a cognitive elite  -- it sails in, innocently enough, as a hope of Progressive Era Wise Experts, see page 205 -- and the various religious traditions of colonization had in common a notion of the Chosen and the Corrupt, and the presence of a reserve army of the desperate was a way for the Chosen to control the Corrupt.  Leavening the mix with the "wretched refuse" of the other European empires as additional Corrupt is straightforward enough.  That's standard stuff, as is the presence of slaves before the Civil War, and Jim Crow afterwards, to persuade the Corrupt that their lot could be worse.  And Hillary Clinton referring to a basket of deplorables?  Standard priors among the Chosen.

The contemporary rediscovery of Redneck Chic?  Perhaps it's a byproduct of the authenticity fetish.  See page 369, but keep in mind that this book appears to have been finished before Donald Trump, politician became a thing (her punching bag is still Sarah Palin).  Too much poverty becoming visible?  Perhaps, although the political economy of full employment is more complicated.  Another echo of the Civil War?  Here's where I wish the author had been conscious of the Trumpening.  Abraham Lincoln presented himself as the tribune of the common freeman (the mud-sill, to use the language of the era, referring to that piece of construction in those pre-basement days keeping bricks or logs apart from the earth) and I would have been delighted to come across a Lincoln passage that scans like "I love the poorly educated."

But they do not disappear, and it is Professor Isenberg's message that they have always been among us, their presence a conscious design, and their agency alone is not the way out of the mud.

(Cross-posted to 50 Book Challenge.)
Posted by Stephen Karlson at 16:23