ANOTHER BONE FOR THE DOG HOUSE.

First a rave, then a rant.


After NIU scored the first 14 points of the game on interception return touchdowns, Nebraska put 17 straight points on the board in the second half before NIU responded with a game-winning drive and two defensive stops in the final six minutes of the game.

The win was NIU's sixth in its last 10 games versus Big Ten opponents since 2009 and the fourth in five games under Head Coach Rod Carey.

During the fifteen years Cold Spring Shops have been posting, there has been more good news than bad to report about the football program, despite evidence headquarters might want to devote fewer resources to becoming the next Boise State.

The outlook from Lincoln is less cheerful.


This time, defeat came not on the road against a potent roster stacked with high-end talent, but rather in the friendly, cavernous confines of home and at the hands of a Midwest mid-major picked to finish in the middle of its Mid-American Conference division.

“All of this will sound like an understatement,” head coach Mike Riley said to open his postgame remarks, “but we are just really, bitterly disappointed with losing the game.”

Well, Hillary Clinton wondered why she wasn't ahead by fifty points, and look how that turned out.

Put not your faith in pre-season punditry, dear reader.  To repeat, there's been more football success than frustration in DeKalb the past fifteen years. 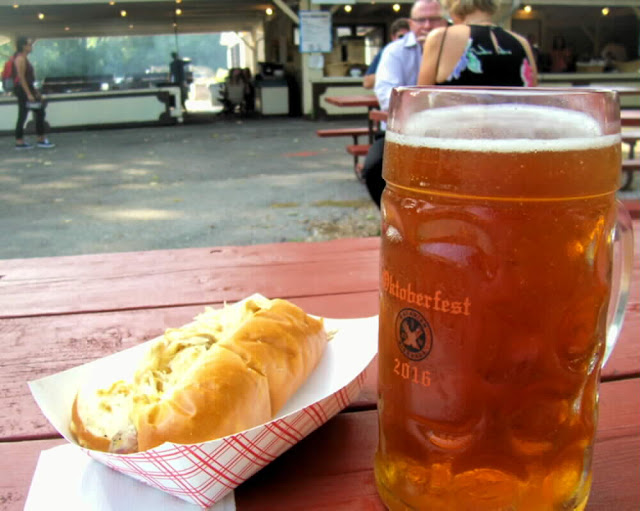 Yeah, I had some errands to run, and finished the afternoon at the Milwaukee Oktoberfest.  The victory called for a toast.  Note in the distance the Spanferkl roast is in progress.

In Lincoln, they're not yet measuring the head coach for a spit, and yet the frustration is mounting.


[Athletics director Shawn] Eichorst realized that following Saturday’s 21-17 loss to Northern Illinois, when an athletics director who prefers to be seen in public only slightly more often than Bigfoot put himself in front of reporters to address the elephant in the room.

While losing a payday game to a Mid-American Conference team is practically a rite of passage for membership in the Big Ten, this was not a well-timed toe-stubbing for Nebraska.

Let us call the roll of Big Ten teams who have stubbed their toe to Northern Illinois: Wisconsin, Northwestern, Minnesota, Purdue, now Nebraska. Maryland were not yet in the conference in 2003.

And "payday game?"  Please.  There are more than a few Mid-American teams in this USA Today listing of guarantee games, but note, none involving Northern Illinois.

Now, for the rant.

At the season opener, I noticed a new countdown clock, giving the time remaining until the redcap puts the baggage on the Corn King 400 and the referee whistles off.  This is apparently part of a Mid-American initiative to reduce game times by five minutes, to an average of three hours twenty minutes, or the time a Hiawatha could once get from New Lisbon to Chicago.  "[Conference commissioner Jon] Steinbrecher said conference officials are studying ways to get a handle on games that have been drawn out by more passing and scoring, penalty administration, TV timeouts and other factors."

Get rid of video review.  Just get rid of it.  Officials can be sloppy and have their errors reversed upon appeal to the tape jockeys.  Coaches know that the officials are sloppy, and they simply use their challenges rather than get tossed out for arguing bad calls.
Posted by Stephen Karlson at 19:15