Worcester has been retrofitted for the car. Worcester buses no longer leave every 15 minutes to bring you to your destination.  Bike lanes are few and far between.  Rail service to Boston has been slow to ramp up in terms of increasing round trips and direct, faster routes.  What if we invested in train and bus service as much as we subsidize the use of private automobiles in the form of road maintenance, free parking and low gas taxes?

Worcester has been home to the O Scale convention several times in the past twenty years, and the downtown convention center and headquarters hotel are a short walk (or taxi ride) to the passenger station, shared by Amtrak and the Commuter Rail operator.

Look closely at this aerial photograph, though, and see Ms Mandell's point. 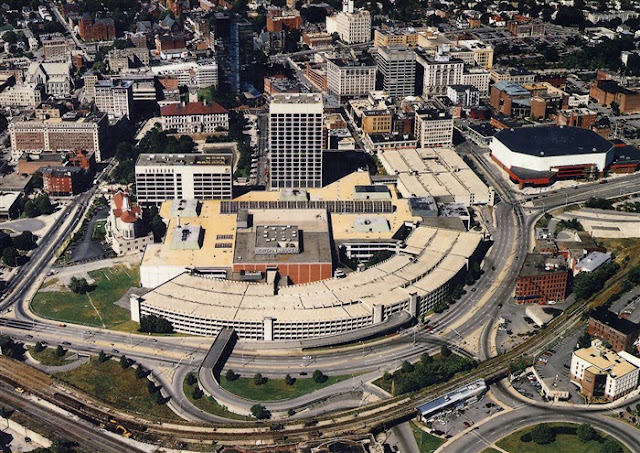 Union Station is just out of the picture at the bottom.  The passenger platform on the curve remains from the days when the seasonal East Wind and Bar Harbor and the year-round State of Maine would swap power between the New Haven and the Boston and Maine.  These days, the train to Maine requires a change of stations in Boston, and the summer people mostly fly or drive.

To get from the railway station to anywhere, however, the intrepid passenger must get across that moat of roads.  That is equally true, for instance, of the commuter who parks in that monster parking deck and catches the Boston and Albany, er, Keolis-operated (today) MBTA train toward Boston.

The O Scale show would use space in that convention center at upper right, which could be obtained more easily in the summer, which is to say, neither college basketball nor minor league hockey season. Go a few blocks, though, and those office towers are mostly empty or occupied by low-profile local businesses, and the road moat becomes narrow New England streets.


Shifting from a nation of cities to a nation of budding suburbs was also driven in large part by federal spending priorities.  One of the models of this new suburban landscape was postwar Levittown twenty five miles outside of New York City.  Built in 1947, this “garden community” featured carbon copy, mass produced cape-style houses on small lots.

These houses, beginning to sprout up nationwide, were affordable and available especially for World War II veterans.  The population shift from the cities to suburbs was subsidized by the federal government in the form of low interest loans.  For less than $500 down, a returning veteran could have access to a piece of the American dream – a deed to a three bedroom house, a patch of lawn and a car in the driveway in a newly built suburb.

However, the most important and little told fact about these government loans through the Federal Housing Administration (FHA) and the Veterans Administration (VA) is that racial discrimination was embedded into the government’s lending practices, directly leading to the “white flight” to the suburbs and the “browning of the cities”.

Even though technically illegal after 1948, the FHA continued to uphold the practice of racially restrictive covenants that prohibited people of color from buying properties in newly developed suburbs.  Additionally, the FHA used race and ethnicity as a variable for decisions to extend FHA-backed mortgage insurance, primarily denying mortgages to people of color during this key time period.  White residents of newly built suburbs were able to benefit from the investment of public infrastructure: roads, new sewer systems, new public schools and libraries, electrical lines.

As this huge exodus was occurring post World War II, the cities and the residents who remained there saw their neighborhoods crumbling.  As the eyes of lenders were looking towards the newly built space in the suburbs, they simultaneously disinvested from neighborhoods in the urban cores.  Banks marked off whole urban neighborhoods as areas for bad investment so that residents could not get access to credit for anything from home purchases to home improvement projects or small business loans.  Many of these neighborhoods that banks redlined were neighborhoods of color, a double dose of racially discriminatory lending practices directly explaining the emergence of “white wealthy suburbs” and “poor inner city”.

There are two narratives at work here: the restrictive lending policies are a manifestation of the sundown suburbs, a phenomenon we have noted previously, and which may still be with us; as well as the Strong Towns analysis of that new suburban development as a growth Ponzi scheme.  In addition, however, we must note that single-family houses on plots of land that required mowing were with us in the form of streetcar suburbs, perhaps as early as the beginning of the twentieth century and surely by the Roaring Twenties; and that the cities that continue to offer agglomeration economies for entrepreneurial activity turn into places with high rents.  Thus there's outward migration, including to suburbs with tract houses.  Today, then, the "poor inner city" is a city where that sort of entrepreneurial activity has not returned.


Worcester chose the path of urban renewal over neighborhood rejuvenation.  However, the temptations were large at that time to go down this path: The federal monies available through such mechanisms as the American Housing Act in 1949 and the 1954 Interstate Highway and Defense Act, were available to change drastically the physical landscape.  Worcester was not the only city that jumped on board that gravy train.

Seemed like the logical choice ... at the time.
Posted by Stephen Karlson at 11:52