IS PERFECT THE ENEMY OF GOOD, WHEN THE STATUS QUO IS "NOTHING"?

For a long time, we've been following the attempts, by private interests, to develop faster Passenger Rail in Texas.  Those attempts have come in train with special pleading by rent-seekers, and the NIMBY roam.  Thus, ten years on, no new trains.  Don't say I didn't warn you.


A debate between the dedicated high-speed passenger line advocates and the advocates of less costly combined freight-passenger-toll truckway projects brings with it the risk that no rail improvements will be forthcoming. That leaves Texas with the impossibly slow Heartland Flyer and Eagle and the try-weakly Sunset Limited, all of which made better times with handfired Harriman Standard 4-6-2s and their counterparts.


Train originates at San Antonio this day, at 6.45 the conductor says, "Let's go for a train ride."  Leave San Antonio 7 am, on time.  First stop San Marcos, 52 miles away, 8.32, double stop, away 8.39.  Texas Central wishes to get from Houston to Dallas in 90 minutes.  I'm enjoying a good breakfast and conversation in the diner, yet have flashbacks to those German trains of two months previous.

There are, however, two proposals seeking assent from Texas authorities.  One proposal has the imprimatur of the French Societe National de Chemin de Fer, or perhaps they simply go as SNCF for continuity, the way the private Canadian National are still CNR.  Whatever the affiliation, the logic is impeccable. "'Look at the state as a whole. Instead of creating a link, create a network,' said SNCF America president Alain Leray."

Yes, and build it by increments.


Maryland-based SNCF America, a branch of the French National Railway, pitched its "Texas T-bone" idea to the Federal Railroad Administration in 2008 and 2016. The plan calls for "higher speed rail" service of 125 mph.

The railroad administration has instead proceeded to work with Texas Central Partners on a Dallas-to-Houston bullet line featuring speeds up to 210 mph and using Japanese technology.

"Of course, SNCF, the state-owned and highly-subsidized French National Railway would declare they are against competition and block the world's best high-speed train technology from coming to the U.S.," Texas Central said in a prepared statement.

Perhaps you make the case for faster trains by improving timings, frequency, and connectivity on existing lines. Compare and contrast the two proposals. 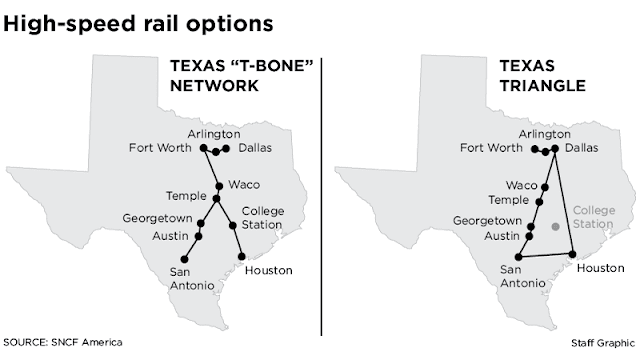 The French plan uses the large Fort Worth intermodal terminal, already served by the two intercity Amtrak trains and the Dallas area suburban trains, and existing rail lines linking existing cities.  Yes, a direct line between San Antonio and Houston would be nice, but adding frequencies on both of those routes, properly timed, means lots of rail opportunities for passengers north of Temple.  That's going to be important in the beginning, weaning Texans from their pickup trucks will require frequency and dependability, and more frequent trains running at 79 mph, with acceleration to 110 and 125 as improved signalling and more robust diesels arrive strikes me as a more sure way of building ridership.

The Texas Central plan appears to envision a new Dallas to Houston Electric Air Line, perhaps in the median of a toll road dedicated to trucks (what, there won't be any paths for stack trains overnight?) as well as another Air Line to San Antonio, and perhaps new construction paralleling the existing route of the Eagle, all of which seeks a home where the nimbrods roam.  "Much of the opposition to the Texas Central plan comes from landowners opposed to eminent domain."  Thus, Texas Central might find themselves in the position of California, building relatively useless track where there is little resistance, thus ending up with no opportunities to build ridership.  Worse, they're neglecting a development the French project might be embracing. "While North Central Texas Council of Governments officials are working with planners for a commuter line from Fort Worth to Waco, Temple-Killeen, Austin, San Antonio and Laredo, Texas Central is not committed to providing that service."  That "commuter line" ought not be confused with Chicago's Metra or New York's Metro-North, although intermingling regional trains, e.g. Waco-Fort Worth, Georgetown-Austin, San Antonio-Laredo with cross-country trains running the full distance or partial distance (would it be too much to ask for a Dallas-Laredo sleeper overnight?) is the kind of thing European railroads do as a matter of course.

Cold Spring Shops prays that if the T-Bone plan becomes a Passenger Rail network, that there be one operator honoring all tickets, this business of no interline ticketing between Amtrak and any of the urban Commuter Rail operators being bad business.

Recall, dear reader, that the French TGV trains rolled out as incremental improvements, and they still use the same tracks into the urban stations as their steam-powered predecessors.
Posted by Stephen Karlson at 15:57