HOW WE GOT THERE BEFORE THE LINCOLN HIGHWAY.

The "Looking Back" entry for July 18 featured this view of a Chicago Aurora and DeKalb interurban at Cortland. 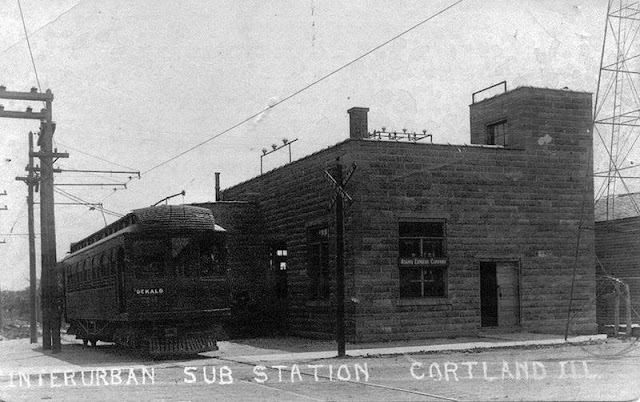 The view faces east.  The interurban was just south of the Chicago and North Western tracks, and the sub-station with Adams Express office stood, in some other use, until early 1987.

Passenger service was covered by two cars, which would meet at Kaneville.  The passing track was a stub track: the DeKalb-bound car would back in to meet the Elgin-bound car.

The round-up of events of a century ago notes that the DeKalb Municipal Band played to a large audience at Huntley Park.  The band shell is now at Hopkins Park, and on occasion the band plays a medley of popular tunes from the ragtime or Great War Era, and they still play to enthusiastic audiences.
Posted by Stephen Karlson at 20:35