THE AESTHETES DISCOVER THE KING OF SCALES.

When Milwaukee's Walkers Point neighborhood was in the shadow of the coke works, and down-wind from the tanneries and the stockyards, the few bars catered to the shot-and-a-beer folks coming off shift.

No more coke works, no more tanneries, no more stockyards, now come the hipsters, and they've discovered a national treasure.  "A model railroad club — which for several decades has been hiding in plain sight within a historic former train station."  Apparently, even a utilitarian train station rates architectural taxonomy: "astylistic utilitarian."  That was probably true of the Lunar Module as well, but I digress.

There are older model railroad clubs, although none of those have been operating continuously in the same place as long as the Model Railroad Club of Milwaukee.  And the circumstances of its founding: can you think of a more distinguished triumvirate of modellers than these?

Mr Zeidler's brother Carl also briefly served as mayor of Milwaukee, before being called into naval service and going missing in the Pacific.

The club has long been a hangout for O Scalers and model railroad enthusiasts, and now the bar aficionados who have rediscovered Walkers Point want to get the club in on the gentrification.


Club members built an extensive layout, which spans two connected rooms, to run their trains. The 15 or so current members continue that activity, usually meeting on the last Sunday of each month from around 1 to 3 p.m. Visitors are welcome.

The members also get together to do repairs to the building as well as the train layout. The layout features railroad tracks going through tunnels, over bridges, through rail yards and past backdrops featuring city skylines, mountain ranges and other scenes.

Club members tend to be older. Most got into the hobby through a parent or other family member.

"My dad used to bring me down here in the 1940s," said longtime member Gene Seidler.

That Sunday opening is a recent development. For years, the open day was the third Friday of the month, 7 pm to 10 pm. With Walkers Point bringing in the hipsters, it's harder to find a parking place near the clubhouse. At the same time, getting the preservation advocates and the tourists on board to help out is likely a positive development, as the station building is part of a railroad overpass, and it's a matter of time until Canadian Pacific gets around to strengthening the bridges on the south side.

Long-time readers might recognize the diesels, here off their home rails during a 1998 visit to the club. 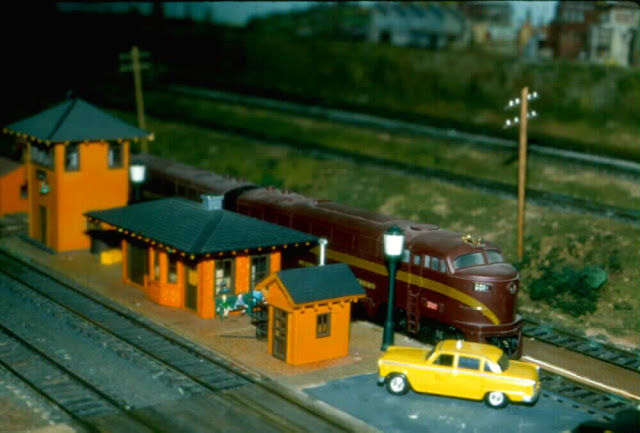 The club version of Lake, while it was still primarily a freight yard.  The prototype location is now the south end of the Milwaukee Airport station. 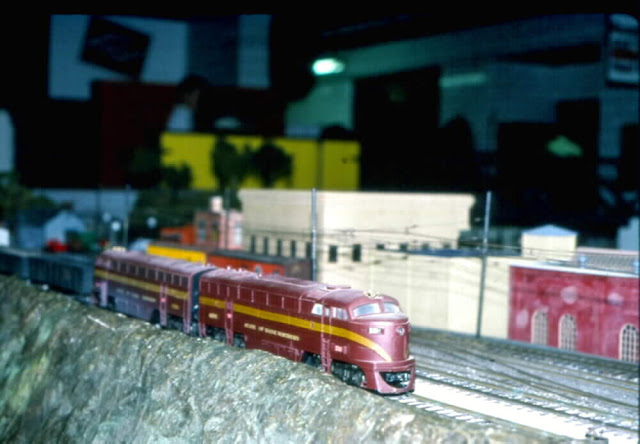 There's a functioning electric railroad in the background, complete with a believable representation of Milwaukee's Public Service Building, and the Port Washington interurban station.

Club members hope to recruit members from the walk-by and walk-in visitors.  Visibility is a good thing, provided it doesn't lead miscreants into temptation, too often the fate of railroad preservation efforts, full scale or otherwise.
Posted by Stephen Karlson at 12:20