TWO TRAINS CAN CALL AT STURTEVANT AT THE SAME TIME.

We've documented the phenomenon, and the Hiawatha schedules sometimes call for two trains to simultaneously be in the station.  The newish Amtrak station in Syracuse, New York (located, ironically enough, on Hiawatha Boulevard, is not.)

That will come.  For last month's O Scale Convention, in Rockville, Maryland, I made a rail trip by way of Boston, originally to do more fieldwork for my a-building model railroad, latterly to take advantage of a travel opportunity.

First, though, is the getting there, and it's a chance to ride a Lake Shore that doesn't involve dropping the dining car and New York sleepers at Albany (well, there no longer is a dining car) or bus substitution east of Albany account construction on the Boston and Albany, er, CSX, or a change of trains at Albany.  This year, though, the New York passengers had to change at Albany, as the Empire Corridor trains returned to Grand Central Terminal while the Spuyten Duyvil swing bridge was repaired.

Illustrations after the jump.


Monday, August 20, when the trip began, was not a good day for Chicago's suburban railroads.  There was freight train interference, or signal troubles, or police activity involving an outbound suburban train, and my planned 3.18 departure from Elburn to Chicago finally took place around 4 pm. 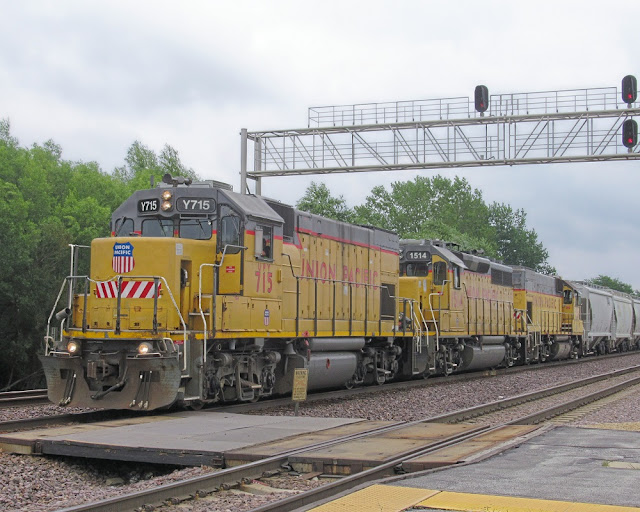 That's the Troy Grove job awaiting a clear signal, it's a relatively short train today, but the three diesels sometimes come in handy hauling fifty loads or so of frac sand out of the one online industry.

The train running as train 54 to Chicago is only a few minutes ahead of train 56, which was also a few minutes late going west.  As trains on the old Chicago and North Western don't simply ping-pong between terminals, the late arrival of 54 (and a few other problems) left North Western Terminal in a mess just before six p.m.  It wasn't any better at Union Station, something had gone wrong on the Burlington Racetrack, and frantic commuters had jammed the reversible escalator (it's supposed to go up from the Amtrak hallway to the food court in the evening) in order to get to concourse level, which was also crowded with people, and the departure board noted all manner of delayed trains.  The Eagles, 22 and 422, are due at 9 p.m.

That's where it helps to hold sleeper space.  Stow the kit in the store-room, and use one of the exits from the Great Hall away from the not-so-dashing commuters and go shopping. 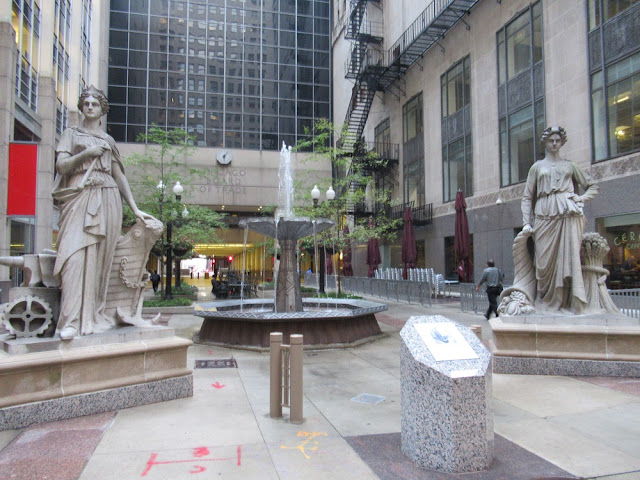 I must have walked by these statues, salvaged from an older Board of Trade building, any number of times, without noticing.  There's something about the design of the old Pit card game box and cards in these statues.  There's no food service on the Lake Shore, which leaves at 9.30, but there is time to purchase some books and grab an Epic Burger.  Then rest at the Metropolitan Lounge and start reading.  Train is ready for boarding at 8.30.

Leave 9.30.  Stop near the Skyway.  Go.  Stop opposite the refinery at Whiting (yummy!).  Here we go again?  To compensate for the end of proper food service, sleeper passengers rate an adult beverage.  Not a bad half-bottle of red wine.  Good night.

It's the usual sleep on and off on the train, but I missed South Bend, Elkhart, Toledo, Sandusky.  Cloud-filtered sunlight coming in, train stopped, tall buildings out my window.  Eastbound train, facing south, must be Cleveland.  Yup.  Freshen up.  Erie 8.15-8.22, let's get that box breakfast.

One of the depressing sights along the old Water Level Route is the remains of the old passenger stations: only two working platforms at Toledo, the gutted platform roofs at Erie, the shell that is Buffalo Central Terminal (and no equivalent to Ford Motor to restore the tower). 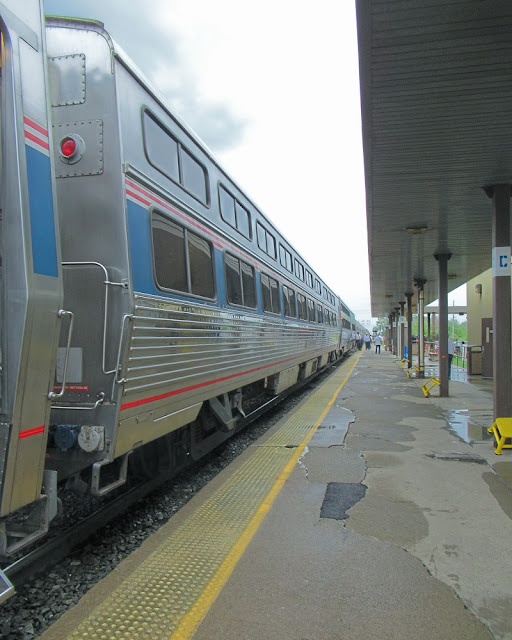 That's the replacement station at Buffalo Depew Street.  Four tracks in the grand manner, but only one platform track.  Leave 9.57.  More ruins at Rochester. 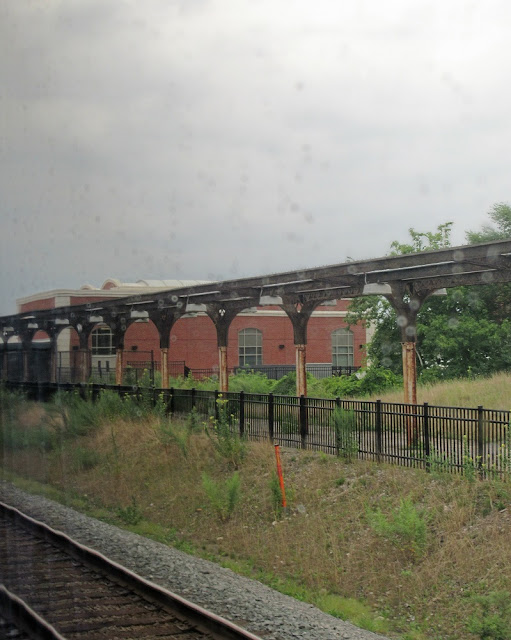 The new station is just to the east here, 10.55-11.01.  I've complained previously about trains not being able to simultaneously call at Syracuse, here we go again, wait west of the station for the Maple Leaf to finish its station work (what's a Lehigh Valley train doing on The Water Level Route anyway?) 12.16-12.27; Syracuse station stop 12.30-12.40, change engine crews.  Utica 1.32-1.35, lots of vintage equipment on the Adirondack Railway, I'm busy disassembling my lunch box for balsa sheets; Schenectady's Plasticville-inspired station is still under construction, short platform, two stops 2.50-2.53 and 2.53-2.57, arrive Albany 3.19.

Let's go railroading in the best pre-Vanderbilt manner.  Here's the connecting train to Grand Central Terminal, just another Empire Corridor train.  (Word has reached the Superintendent that the through cars to New York City returned after Labor Day but the Amtrak website is not acknowledging their existence yet.) 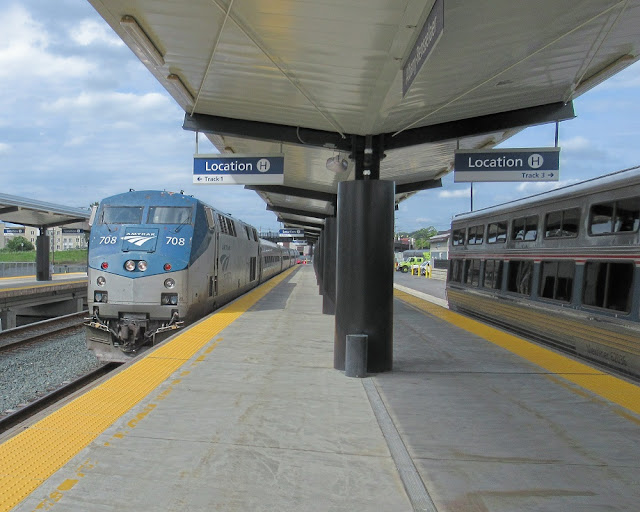 I suppose we should be grateful the Albany trackage permits multiple passenger train movements.  That was not possible ten years ago. 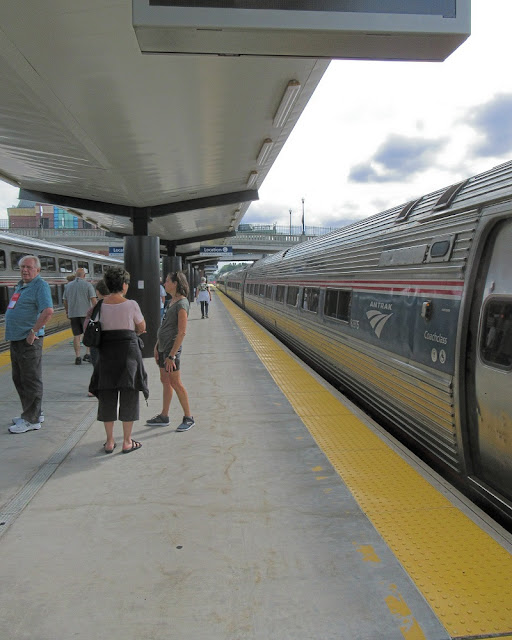 There's no sense of urgency servicing the train and getting it rolling, even though it is late. 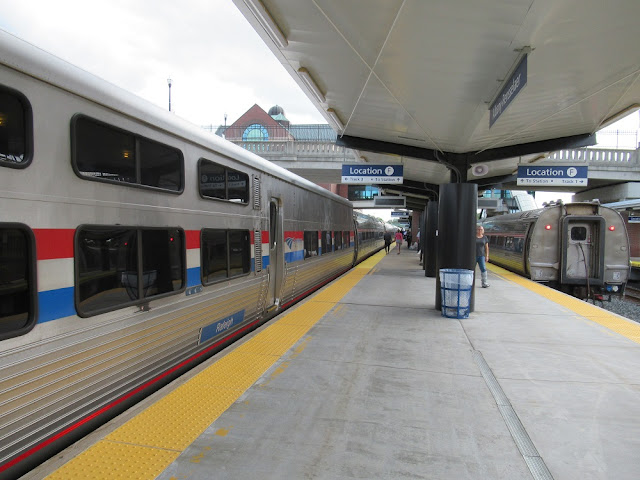 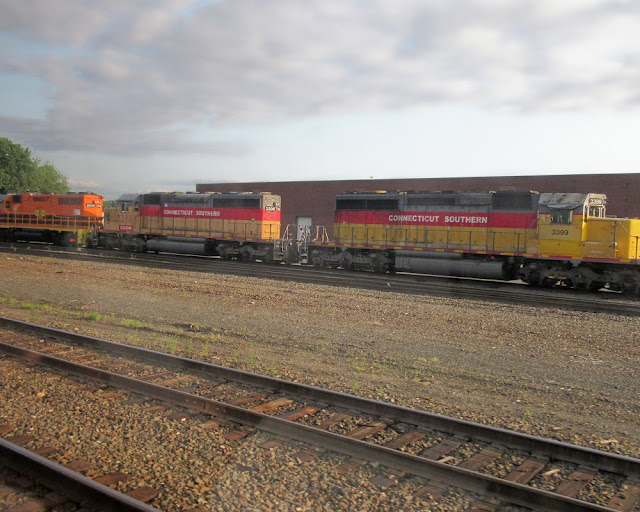 There's work in the Springfield station associated with returning the head-house to service and providing track capacity for the expanded Connecticut Knowledge Corridor suburban service.  (Don't get me started on the frequencies the New Haven offered back when America was great!)  Springfield 6.38-6.47, one passenger a bit slow to get the memo, gets off the train at last, and off we go.  There's another one-platform station at Worcester, and a suburban train has to do its work and set back into the coach yard, Worcester at last 8.12-8.14, it's getting dark.  Into suburban territory: Framingham 8.44-8.45; stop in the Beacon Park area for another suburban train to clear; Back Bay 9.22-9.26; stop east of the station 9.28-9.33 for an Amtrak regional to clear; arrive South Station 9.37.

Upon my return, I discovered an Amtrak survey about my experience on the Lake Shore.  One of the questions was "What would have improved your Amtrak experience?"  My answer: being able to buy French Toast at breakfast.

More to come.
Posted by Stephen Karlson at 15:38