BASEBALL WHILE THE SNOW FLIES.

The third weekend of October is one of the quarterly Gallery Night and Day events that sometimes feature railroad or industrial-themed programming at the Grohmann Museum.

So it was Friday last, with industrial photographer David Plowden, this time presenting portraits of workers at work, whether in the steel mills or on the waters or the rails, providing the programming.

The gallery event is scheduled long in advance; little did anyone know that it would coincide with a home opener of a new arena for the Milwaukee Bucks, a concert at the Riverside Theater, an investiture for the local Lieutenancy of the Equestrian Order of the Holy Sepulchre of Jerusalem ... and baseball games with the World Series on the line.

Illustrations below the jump.


That made for another excuse for a train ride, as if I really need much convincing.  Not much to say about the performance this time.  Northbound, the early afternoon train had to play ducks and drakes with dead freight running in both directions, a long stack train, and the Columbia Generating Station empties, with Union Pacific power running through, plus the early afternoon departure for Chicago.

In spite of all the things to do IN Milwaukee, the station was busy with a long queue for the midafternoon departure for Chicago and ample traffic in the drop-off area.  The eastbound Empire Builder was running late, and there might have been people in the station for the westbound. 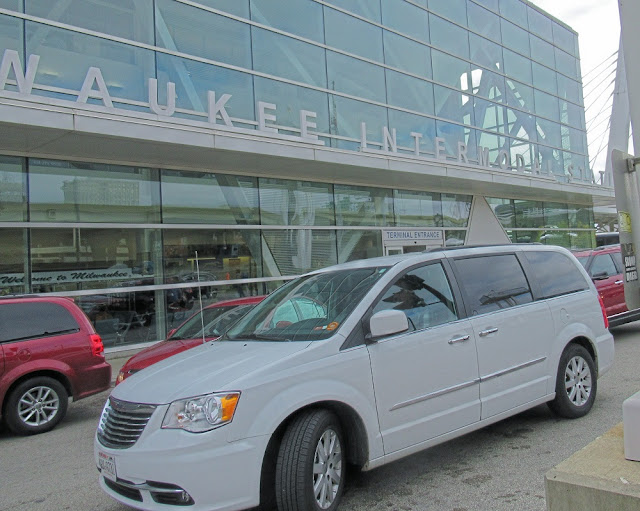 Did I mention there was going to be a baseball game? 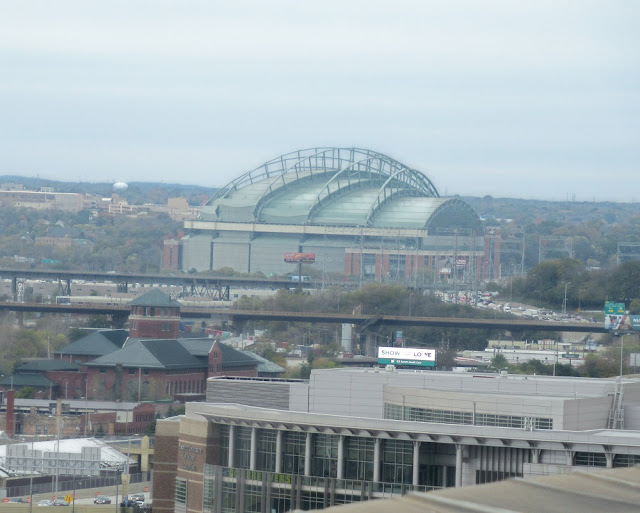 Marquette University's new athletic facility, the retort house of the old gas works, and the 27th and 35th Street viaducts, plus jammed traffic on the expressways.  The Rapid Transit right of way is in there too, if you know where to look. 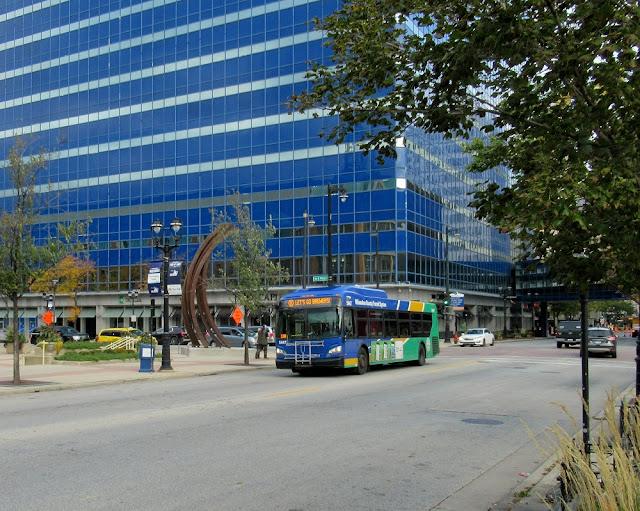 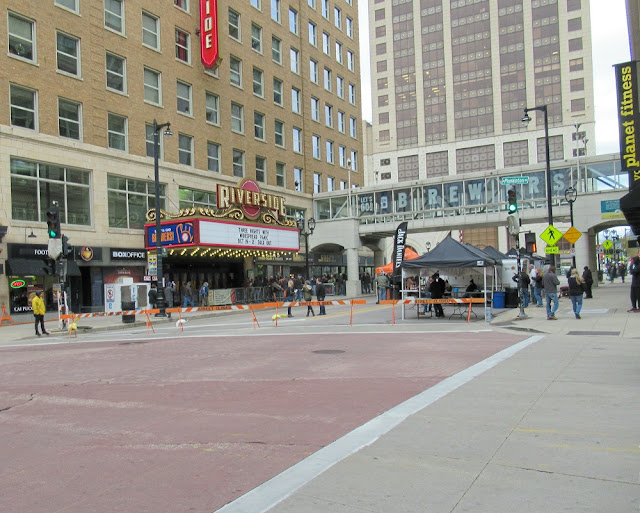 Widespread Panic fans know there's going to be a baseball game.  The concert is a big enough deal that the city has allowed a barbecue stand to set up on Wisconsin Avenue, right by the bridge.  Planet Fitness is in the old Gimbel's department store. 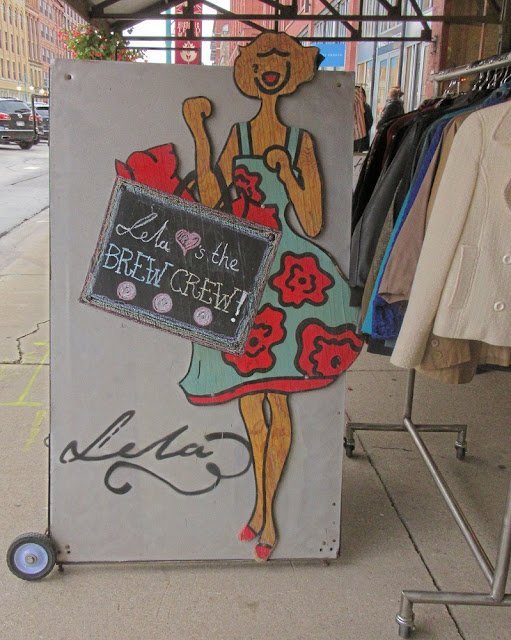 In the Third Ward, Lela knows there's a baseball game. 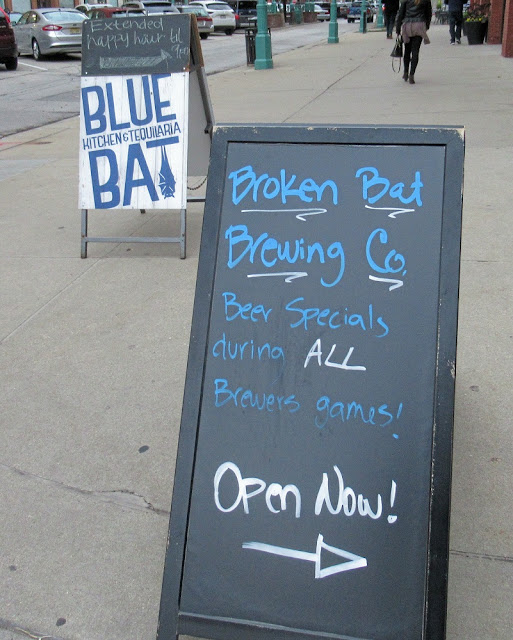 There's more than one kind of Bat Cave.  Of course there will be beer specials. 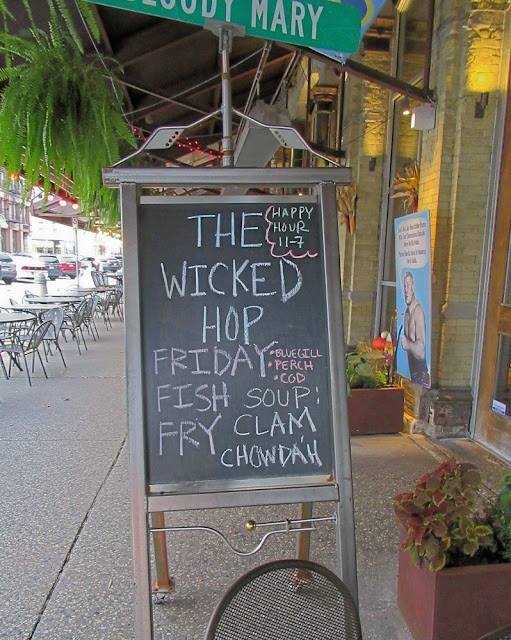 All day happy hour, and a hint of New England.  The outdoor tables are still out, but you wouldn't want to sit outside. 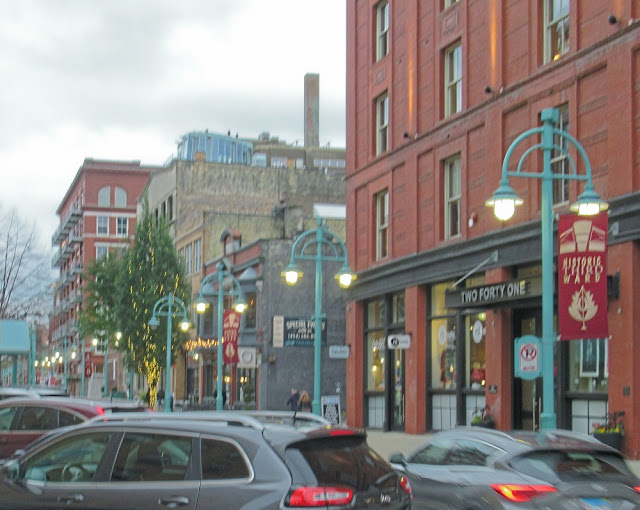 Christmas is not far off, the first trees are already lit! 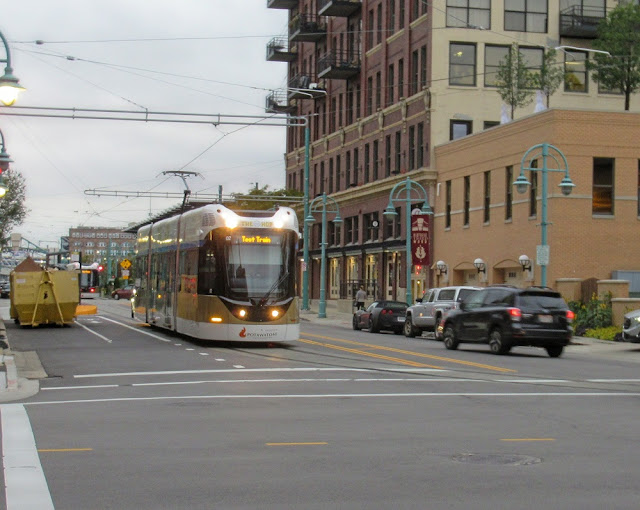 This year, there will be streetcars bending the corner around under the Christmas trees.  Two test trains, well, units, are running on St. Paul and the loop through the near east side. 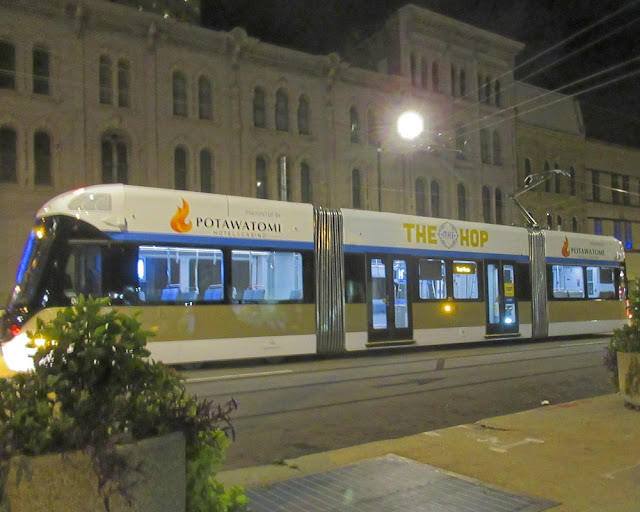 The test cars are running late into the evening, here amid the vintage limestone office blocks along Broadway. 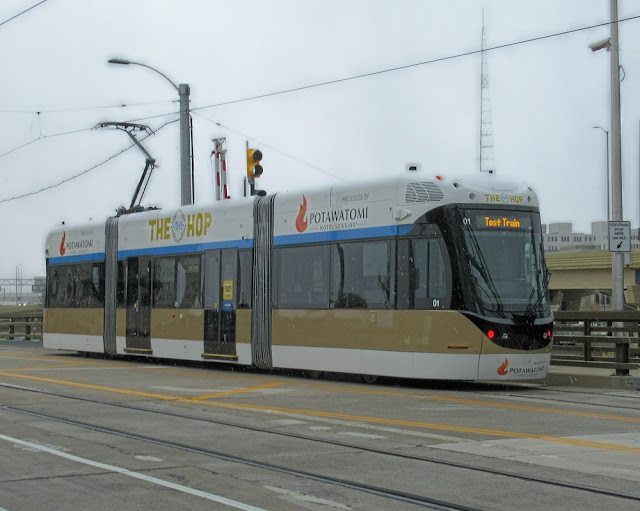 The next day, the test cars are still running.  Early afternoon on the St. Paul drawbridge.  Yes, that is snow flying.  We have this picture only because the 1 pm departure for Chicago I was intending to catch was annulled, with all passengers being offered the 3 pm departure.  Apparently one rake broke down.  The other rake was delayed, finally leaving at 3.18, with a comfortably full load and a large contingent of passengers boarding at the airport station.  It's a bit more of a hike to the eateries on Howell Avenue, or to catch the shuttle back to the airport to find food or coffee or some sort of beer.

The day ended with the Dodgers making the plays to end the Brewers' season.  It remains the case that the one time a Milwaukee team won a World Series there were streetcars serving the stadium.
Posted by Stephen Karlson at 17:36