THE CHALLENGES OF RAILROAD PRESERVATION.

During the War, the War Production Board allowed the South Shore Line to lengthen existing interurban cars so as to better transport the hordes of steel workers participating in the Midwestern Arsenal of Democracy.

The first car so modernized was Car 15, and the Central Electric Railfans' Association evidently had a paper allotment to publish a Bulletin, "The Modernization of Car 15," which in reprint form occasionally turns up in swap meets.

Lots of images below the jump.


Car 15 itself still exists, in Elkhart, Indiana, in rough shape. 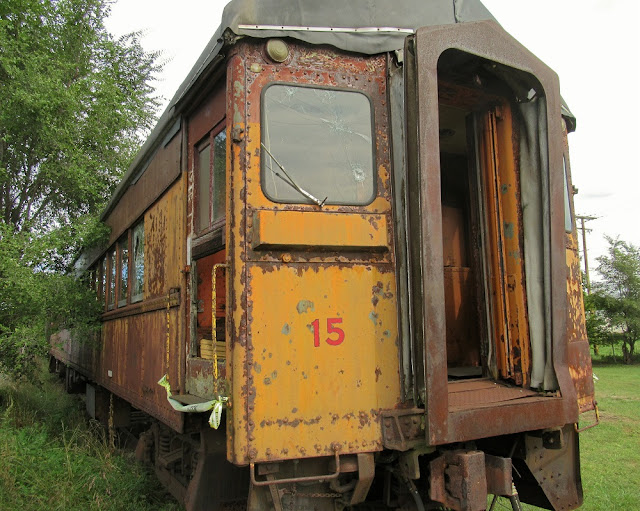 It's on the property of the National New York Central Railroad Museum, and it might be an exemplar of the problems of railroad preservation, when a car is of local interest but not central to the museum's objectives. 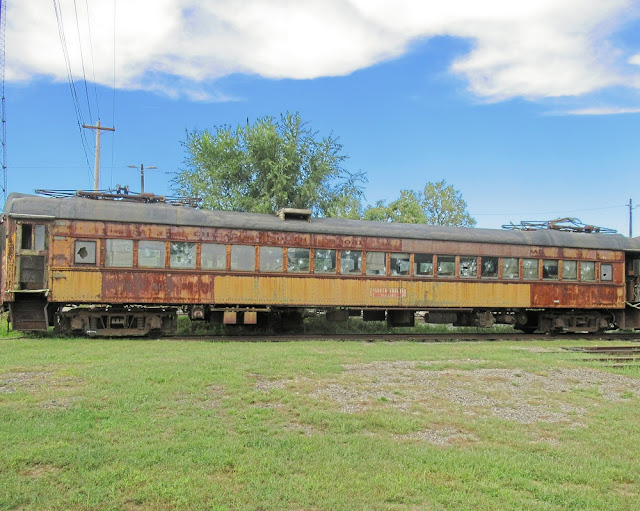 The center section spliced in by the Michigan City Shops is the six or eight windows nearest to the herald.  Yes, the War Production Board was stingy with steel for civilian uses.

After the War, South Shore installed picture windows and air conditioning in the combination cars and some of the 20-29 series of coaches and, until the rule became "find any car that runs," generally assigned those coaches to the Chicago - South Bend service, keeping the non-air-conditioned lengthened cars and the shorter cars in the 1-9 and 30-45 series on Michigan City or Gary turns.

The Elkhart museum has one of the two surviving New York Central Mohawks (as in "The Mohawk That Refused to Abdicate") in its collection: that kettle being in Elkhart when a Texas museum decided having a New York Central steamer dressed up as a Texas and Pacific locomotive wasn't consistent with its mission. 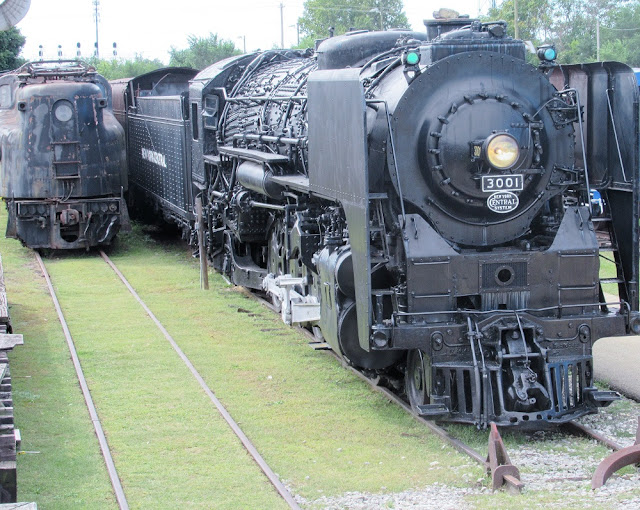 Here's the star of the short story. 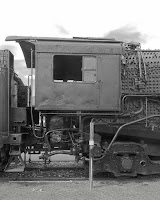 These days, Elkhart is an Amtrak stop and a yard and fueling point on Norfolk Southern, so it's rare that any trains bear down on the crossing with all the implications of destiny of the Book of Revelations.  But 3001 is getting a cosmetic restoration, as resources permit.

At least one of Fifteen's sister cars is still hauling passengers. 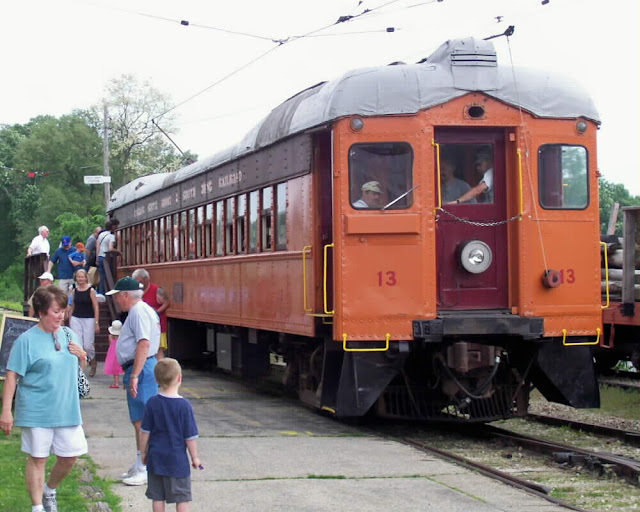 On occasion, the East Troy Electric Railroad can lay on a three-car rake of South Shore cars, including Thirteen.  The railroad is unusual among preservation railroads in that its busiest time is in the fall, when children of all ages converge on the Elegant Farmer in quest of pumpkins, apples, donuts, and the rest of the fall harvest ritual. 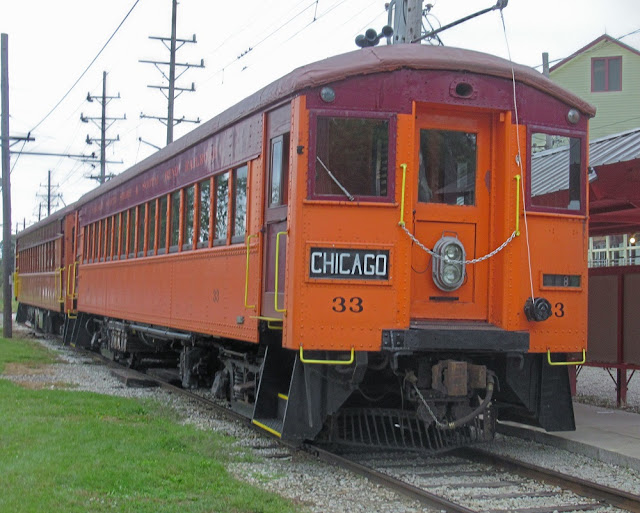 Those are two of the Pullman-built South Shore interurbans, in their as-built configuration with a smoking compartment that these days provides a sitting room for family groups.  Many families will park at East Troy, go marketing at the Elegant Farmer, and schlep the treats home on the cars.  It's useful to have the capacity of Thirteen on some of the trips, when boarding resembles shift-change at the mill.

Cars Thirty and 33 have been spruced up recently, with new fabric on the seats in 33. 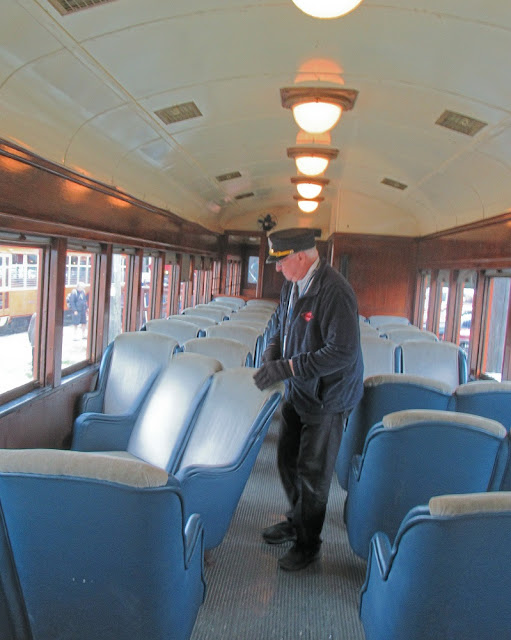 The seats cannot be turned except in the old front to new front order, as the conductor is doing here.  Yes, that's an interurban, and yes, there is more body space in an interurban than in business class up in the air.

Thirty still has the original fabric on the seats. 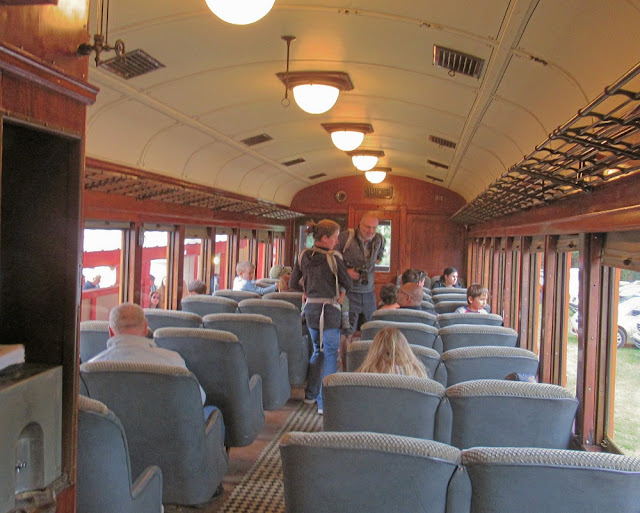 The baggage racks do come in handy for bringing the stuff home.

Note on both cars that fittings such as the bulkhead fans are still missing.  It's always the case that a preservation railroad has projects that could use money, or time if you have the mechanical skills.
Posted by Stephen Karlson at 21:34