THE CRAFT OF O SCALE.

The latter part of August and the first part of September were good opportunities to observe developments in O Scale.  Yes, I did spend some money and buy some stuff, but mostly it was observing what others were doing.

We'll start in the Capitol District, where the 2018 O Scale National Convention took place in Rockville, Maryland, an easy walk from the elevated trains and not far from the Maryland commuter trains, which only run week-days.

The theme for layout tours is Exquisite Modeling of Railroads that Maybe Shouldn't Have Been Built.  There are lots of pictures below the jump.


It doesn't matter where you live, you can always get away with modeling a Colorado railroad, here the Colorado Midland. 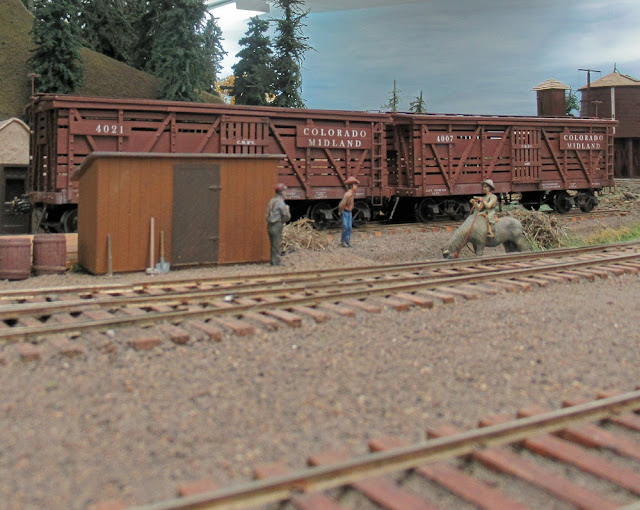 The Midland took the hard way from Colorado Springs to Glenwood Springs, serving a traffic desert other than the odd stock pen as here or gold mine. 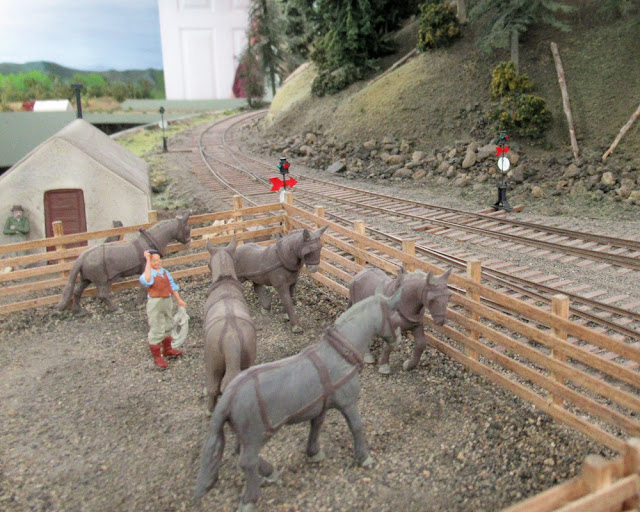 The tracks, switch stands, and scenery are mostly done, and to a high standard of detail. 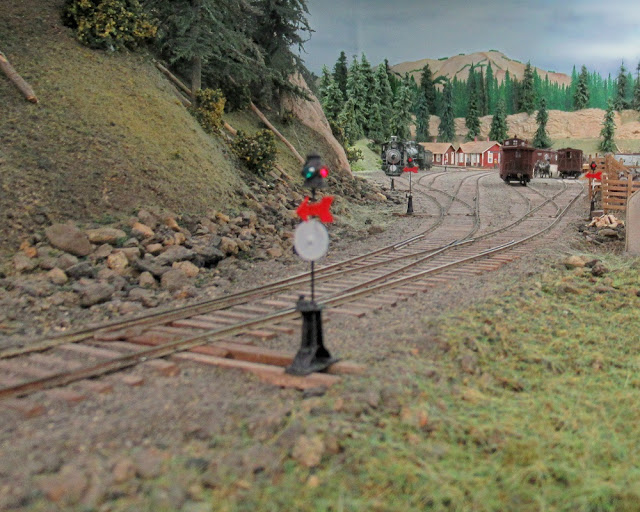 Yes, those switch stands work, and yes, the Midland did use those arrows to indicate the position of a reversed switch.

A lot of modellers concentrate on a railroad based near where they live, sometimes for lack of familiarity with anything else, sometimes for ease of doing research on existing or past track and facilities.  In the Capitol District, that often means the Western Maryland, which was part of a George Gould effort to put together a true transcontinental railroad: the mergers and acquisitions fell just short at Pittsburgh.  Western Maryland itself ran not far from Baltimore and Ohio between Baltimore and Pittsburgh, and when both railroads fell into the Chesapeake and Ohio fold, Western Maryland was mostly cast off.  The right of way makes for a bicycle trail with relatively gentle grades. 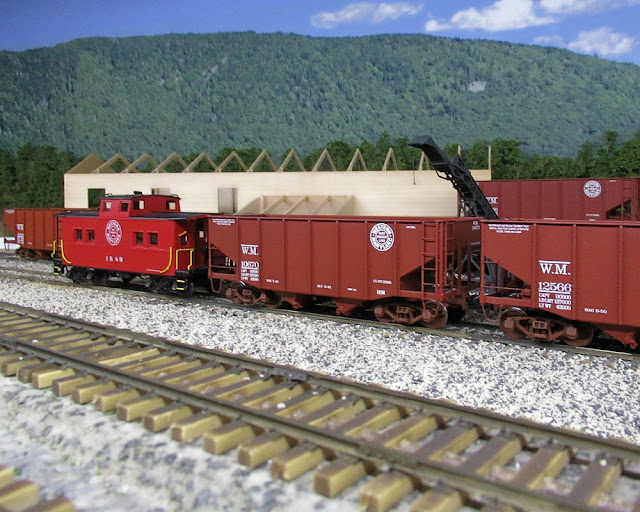 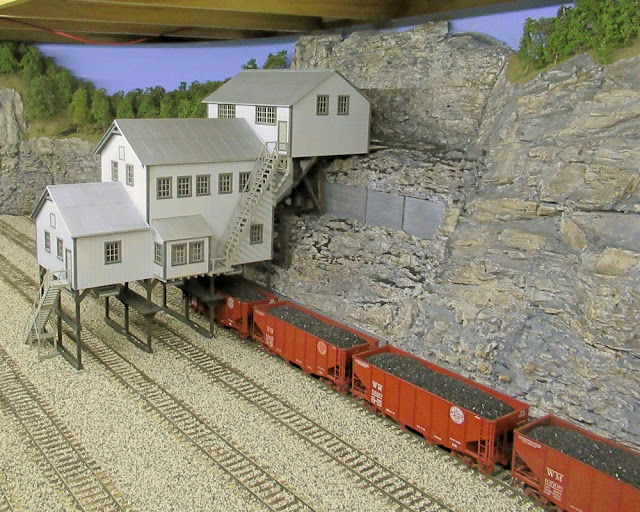 Coal mines are popular on-line industries, as they are a basis for moving loaded and empty cars and switching out cars on all three tricks.  You can build removable loads for your cars, or if you're really determined, build miniature loading conveyors and fill the cars one at a time.  That keeps a switcher operator busy.

O Scale does take up a lot of space, moreso than the Christmas tree layout or the Plasticville buildings.  But this building, in a train room with three distinct pikes, brings back memories of industrial competition in Milwaukee. 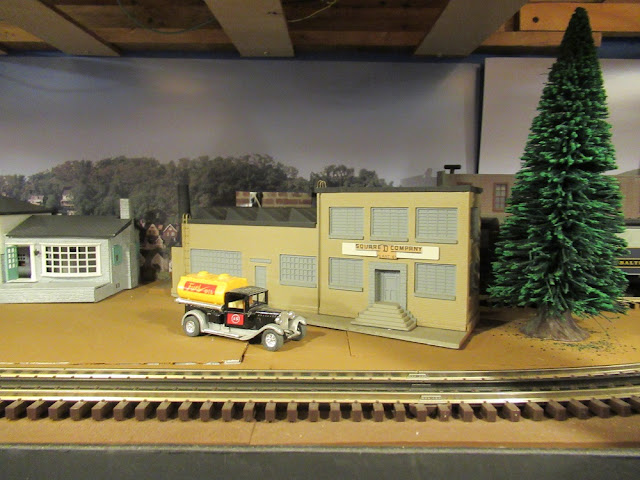 There were a few operating trains at the convention hotel as well. 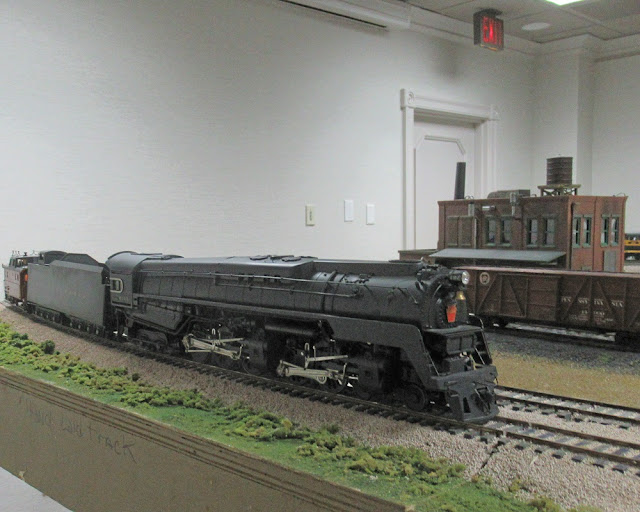 That's a Pennsylvania Railroad Q2 freight locomotive, a duplex-drive 4-4-6-4 that was relatively successful on fast freight, just built too late to stave off the diesels.  Pennsylvania, like several of the other Appalachian coal haulers, did everything they could to avoid antagonizing a customer for as long as they could.  Pipelines from the oil and gas fields pretty much killed the home heating business for the collieries.

Next stop, about a month later, is the Indianapolis gathering, one of the two largest swap meets in U. S. O Scale.  The setup at the hotel borrows from that used by the Gauge O Guild at its Guildex in Telford, with demonstrators and layouts interspersed among the traders. 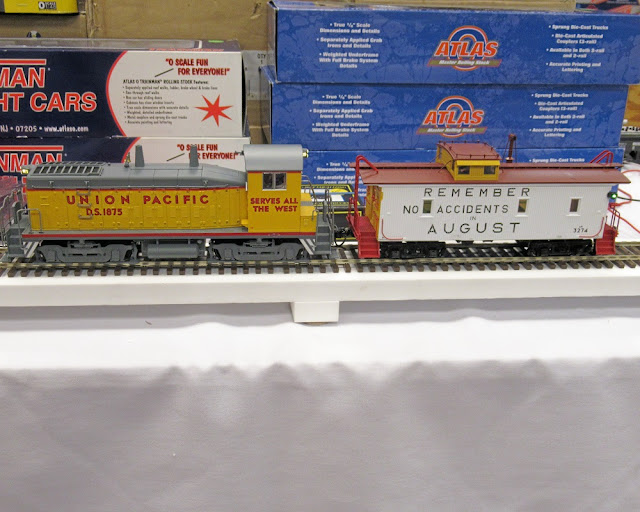 Milwaukee's Allis-Chalmers also built electrical motor controls (and orange farm tractors) and they built some large condensers for power plants that did travel by rail. 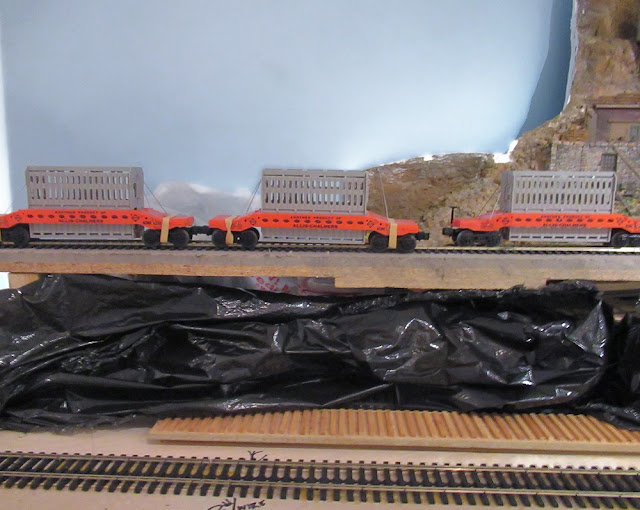 Those are Lionel cars, perhaps a little out of scale, but we'd better not antagonize Darth Vader. 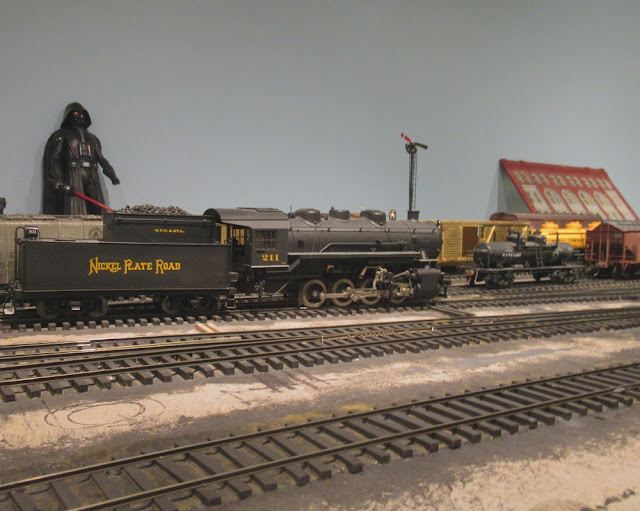 The Nickel Plate is a favorite among Midwestern modellers, despite being primarily a bridge railroad moving priority freight in competition with other carriers such as New York Central, Pennsylvania, and Baltimore and Ohio that don't have to short-haul themselves between east coast ports and the St. Louis and Chicago gateways. 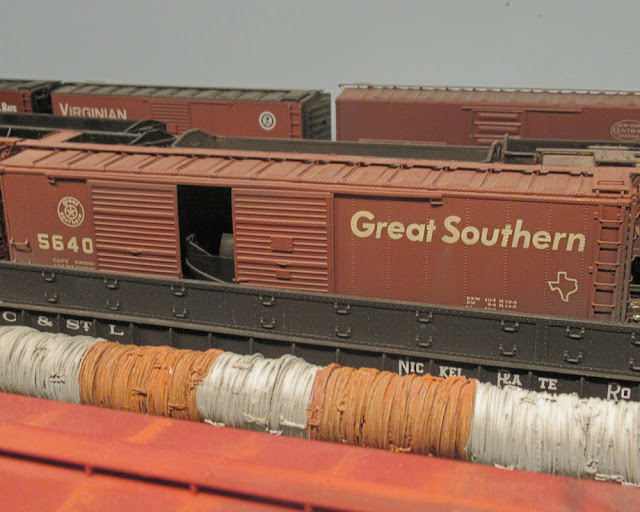 Here's a fallen flag: a car of the late Lorell Joiner's Great Southern, a large O Scale layout in a purpose-built outbuilding in suburban San Antonio. 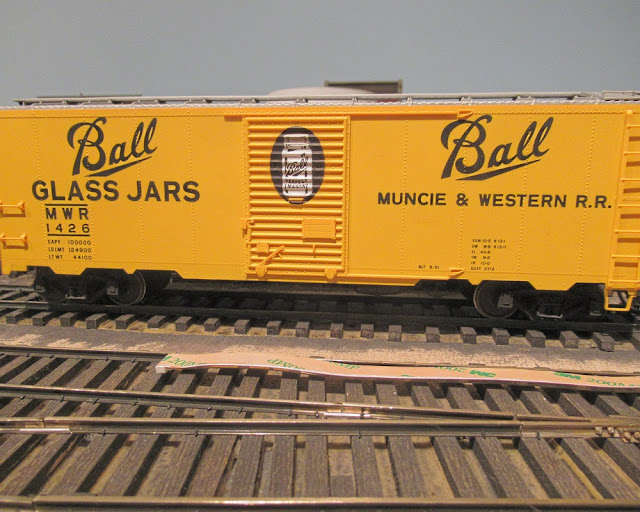 And yes, it's Mason jar money that converted a starveling teachers college in Muncie into a university with a football team that has a habit of repeatedly losing a traveling trophy.

Onward, then, to the Fox Valley O Scalers and the Iowa and Dakota Division. 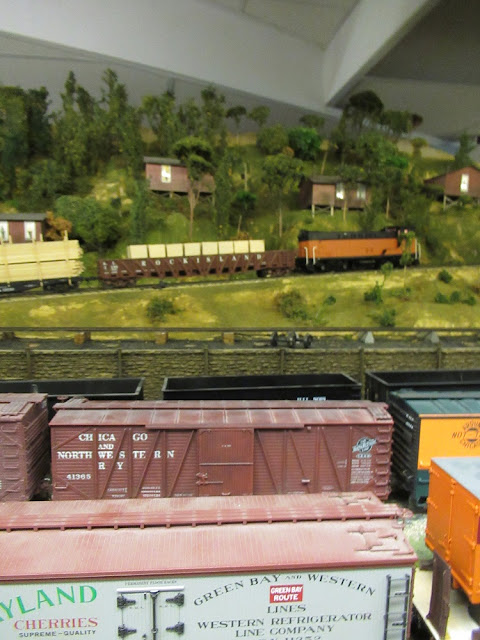 That lumber yard is a challenge, as it takes a switch-back move to pull not more than three cars at a time. 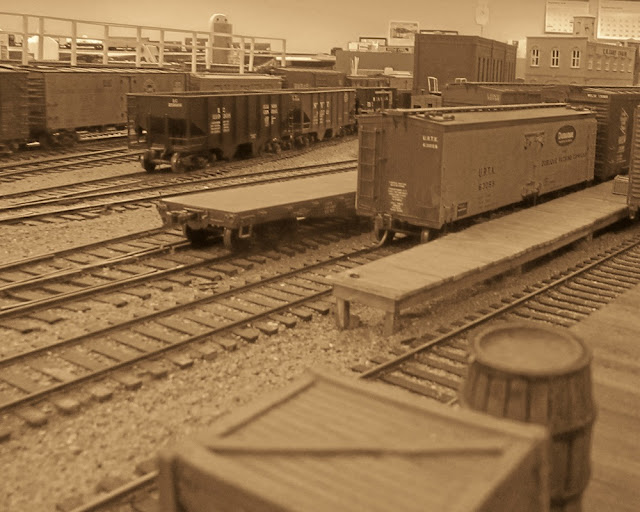 The steam railroad was a promiscuous user of water, heating it in steam locomotives and melting it in refrigerator cars to keep the meat chilled. 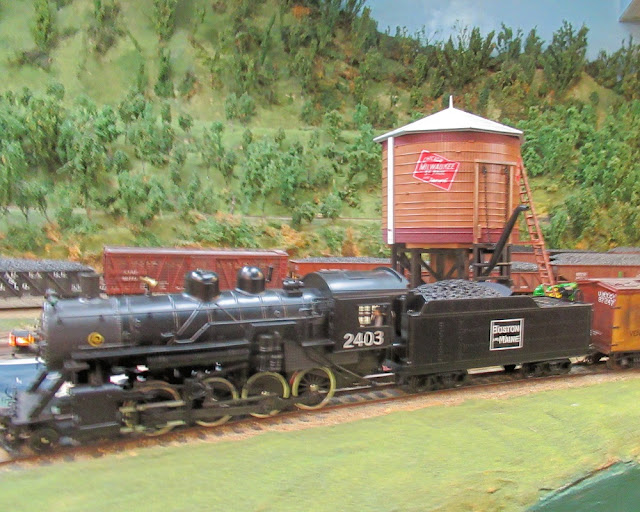 That's one of my kettles, visiting on The Milwaukee Road.

At home, work continues.  During the summer, I tuned up about fifty freight cars. 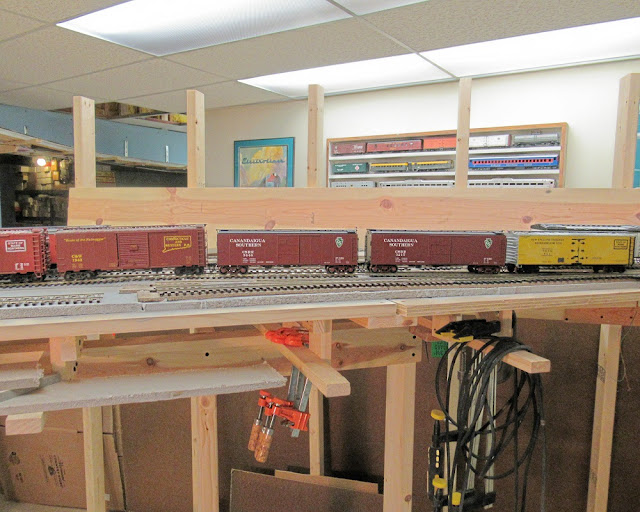 State of Maine Northern and New England Fisheries are my railroad.  Connecticut and Western is the pike of a now deceased modeller from Connecticut.  Canandaigua Southern is John Armstrong's now-dismantled pioneer walk-around railroad.  The box cars are this year's convention cars, a few of which were still available at Rockville. 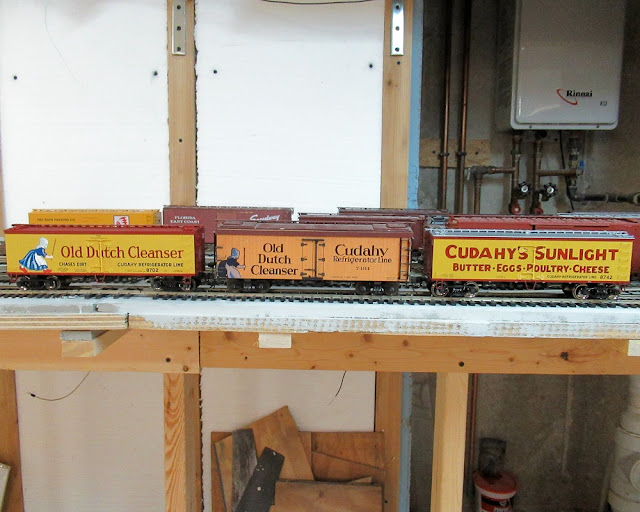 Last spring, I promised a look at a long freight train.  The upper level track still requires work, but we're still planning to run such a train. 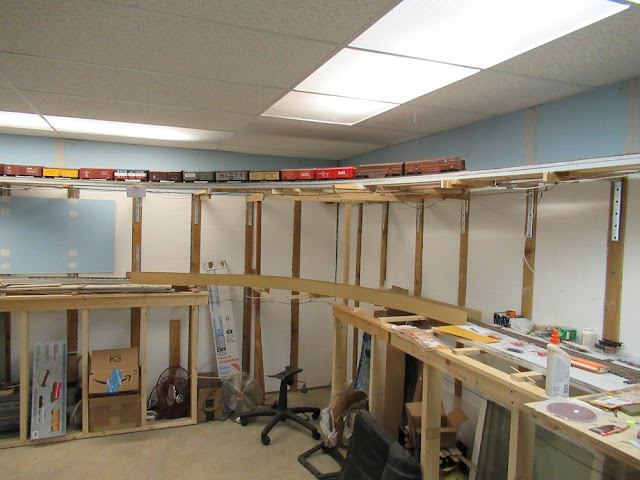 Those diesels are well-travelled, having operated at the Fox Valley O Scalers, the long-gone Rock Island Southern, and the historic Model Railroad Club of Milwaukee.

That upper level is notionally British and Soviet trackage, and the Dawlish area sea wall has a suitable train, and suitable promenaders on the wall. 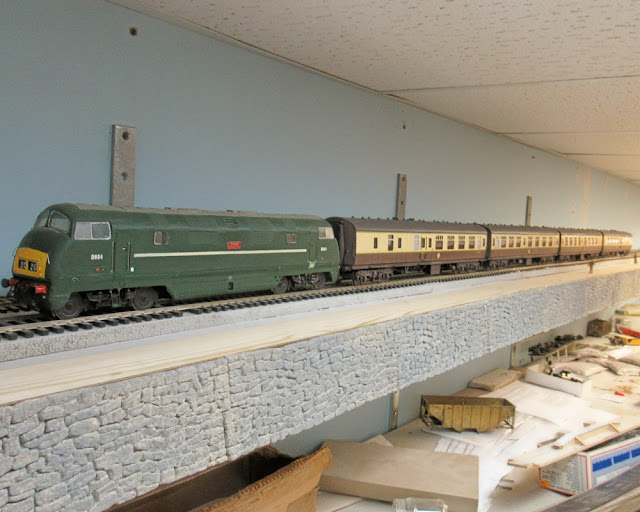 As we shake off this prolonged summer, there's likely to be more progress on the railroad.  Heck, it's pro hockey season and one of the Chicago area sellers of artificial Christmas trees is already promoting a "turn in your old tree" sale, in cooperation with Goodwill.
Posted by Stephen Karlson at 17:39