TO CALL IT A CIRCUS IS A DISSERVICE TO CLOWNS.

Well, perhaps there is a circus interlude after all. 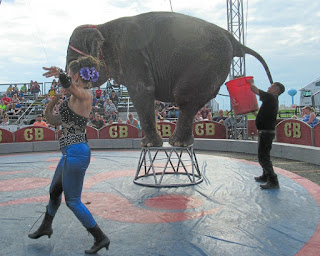 
It should have never happened like that. That inquiry should have happened behind closed doors and been buttressed by an independent investigation. Instead, two individuals, and their families, were publicly destroyed and humiliated.

And everybody has their own experiences that sway their interpretation of events. As a woman who grew up in the 1980s, I had bad experiences with the popular, sporty boys, as well as my own stories of beer filled parties. And a guy tweeted me his own story about how he was falsely accused of a crime when he was in college. Also, I’ve talked with a lot of women who aren’t sympathetic with Blasey Ford. They tell me that guys did this stuff all the time back then and it never stuck with them.

Yes, and the recriminations about whether Mrs Ford wasn't aware of the committee's offer to interview her in confidence are likely to be part of the next act.  We can also look forward to a "Hey, Rube!" of monumental proportions between now and the November elections.

Perhaps, though, the law of unintended consequences at work.  What started as sparring over legal minutiae might now be a hard look at the upscale party culture.  "In Professor Kimmel's view, the conformity so obtained is not that virtuous: beer, sports, babes, sports, internet smut, beer, sports, video games, beer, crude music, babes, gadgets, sports, beer. The closest approximation I can come up to for a working hypothesis behind such apparently self-destructive behavior is the identity-politics notion of resentment."  That changing perspective, though, is emergent.  Here's Mr Van Buren, suggesting that what went on in high school was, well, high school.


The once great Senator Patrick Leahy engaged in an argument about the meaning of slang terms used in a 40-year-old high school year book with a nominee to the Supreme Court, as if proof of immaturity was proof someone was also gang rapist. Another exchange focused on whether a word meant puke or fart. For every careful courtesy shown Ford, Democrats treated Kavanaugh like a punching bag.

Sgt. Mom at Chicago Boyz also appears to be sealing the juvenile records.


Christine Ford may have been quite the at-large juvenile party animal as a teenager, so I would accept the possibility of an unfortunate, drunken sexual experience being part of her past, as well as a good reason to seek relationship counseling as an adult. Yet I also remember the ‘recovered memory’ phenomenon, the day-care Satanic abuse bruhaha, as well as the more recent Duke stripper rape and the U of V fraternity/Rolling Stone fantasy rape-that-never-was. Yes, there are fads and follies when it comes to mental health and investigating sexual violence, or the possibility thereof.

National Review's V. D. Hanson sees in the scrubbing of Ms Blassey's prep school online history a memory hole at work.  But note, in this passage, that upscale kids behaving badly is a thing.


The online versions of some of the yearbooks of Ford’s high school from the early 1980s vanished as well. At times, they had seemed to take a perverse pride in the reputation of the all-girls school for underage drinking, carousing, and, on rarer occasions, “passing out” at parties. Such activities were supposed to be the monopoly and condemnatory landscape of the “frat boy” and spoiled-white-kid Kavanaugh — and certainly not the environment in which the noble Ford navigated. Seventeen-year-old Kavanaugh was to play the role of a falling-down drunk; Ford, with impressive powers of memory of an event 36 years past, assures us that as a circumspect 15-year-old, she had only “one beer.”

Look, if bourgeois habits are useful life-management skills missing from the poorer quarters, perhaps it's something that ought be instilled in the spawn of the well-off.  Matt "Dean Dad" Reed is on point.  "[T]he on-the-ground version of masculinity that I keep coming back to as a regulative ideal is something like a gentleman. Not a Sensitive New Age Guy, since that always struck me as creepily passive-aggressive, and certainly not a frat guy. Something more like a self-possessed, confident man who thinks enough of himself to treat others with respect. Not a saint or a martyr, but a decent man who understands, even if imperfectly, that his actions affect other people."

Perhaps, particularly as long as there are rebellious teenagers, such as Kirsten Powers, who put themselves in bad situations.


I feared that if more people in my small Jesuit high school found out about it, I would be viewed as a “slut” or “damaged goods.”

The only people I would have trusted with this information were my parents, but to tell them would involve explaining why I was at a party drinking rather than at a sleepover I had been given permission to attend. I would have been grounded for eternity.

I told no one.

Might have been worth the grounding, to let Dad or perhaps an older brother help straighten things out. Unfortunately, between no-fault divorce and smaller families, the older males in the household are likely thin on the ground, and under the new dispensation, reluctant to behave like protectors of the family's honor.  Beer-filled parties and sporty guys, indeed. "I thought I had done something stupid and paid a price for it."

She continues, however, suggesting that those bourgeois virtues have a place, even in high school party culture.


However, we cannot send teenage boys the message that they can sexually assault someone and, as long as they eventually become good citizens, we will elevate them to one of the most important positions in our society. We cannot send the message to teenage girls that attacks on their bodies don't matter because the perpetrator is young like them.

We also cannot send the message to teenage girls that their response to being attacked, or lack thereof, is what will be put on trial. The fact that my friend and I continued to go to parties where this boy was, or said hello to him in the hallway despite thinking he was a dirtbag, does not mean these things did not happen. Our behavior then is not the problem, just as Ford’s failure to talk to anyone about what happened to her for decades is not the problem. We were young teenagers who didn’t even understand what had happened to us.

There is a problem, though, and it's this: The culture failed to give us the language to describe such violations, and made us feel that talking about what happened to an authority figure would only make things worse for us.

Fortunately for women, what happened in the 1980s isn’t staying in the 1980s. It’s a reckoning that is well overdue.

No, Ms Powers, it's not "culture failed to give us the language."  Rather, it's that adults had marinated in ten to twenty years of "if it feels good, do it," and "bourgeois" was a dirty word in Trendy Circles.  It's not that the Non-Trendy didn't warn you.  Sorry, I'm not persuaded by that "Our behavior then is not the problem," not if you were aware at the time that fessing up to going to a kegger would have gotten you grounded, athletes behaving badly notwithstanding.

To continue, though, James Joyner might be helping call the athletes and other privileged kids to account.  He compared and contrasted the senior yearbook profiles of Justice Gorsuch and Judge Kavanaugh.


Kavanaugh’s yearbook entry is filled with innuendo and references to drinking, among other things. Also absent are Gorsuch’s references to academic pursuits, clubs, and honors, despite Kavanaugh’s claim that he buckled down and focused on academics while in high school.

Of course, on some level these entries don’t just (or primarily) tell us about the individuals who wrote them. The real insight these entries give us is a window into these individuals’ friend groups. Who did they run with? Who did they form their jokes with? Gorsuch, it would seem, was a policy nerd who hung with the debate kids. Kavanaugh, in contrast, seems to have run with a crowd that partied, and partied hard.

That hail-fellow-well-met behavior might be the norm in high finance (perhaps not for the good of investors) and business, and there might be some socializing skills young men learn by hanging out with such crowds.  On the other had, that milieu places a high value on superficial niceness and glib impertinence, to the detriment of introverts and more careful thinking people.  I repeat, because repeat I must, a question from five years ago, "Reflect, though, dear reader, on those areas of society where the extroverts dominate the culture. Greek-letter organizations. Business. Politics. How well have those areas been performing lately?"

Here's Robert Reich, who himself has had bad experiences with the glibly impertinent.


The Kavanaugh-Ford hearings before the Senate Judiciary Committee on September 27 was a window into our bullying culture.

On one side: powerful men who harass or abuse women and get away with it, privileged white men intent on entrenching their power on the Supreme Court, men vested with the power to take away a woman’s right to choose what she does with her body.

On the other: women with the courage to tell what has happened to them, to demand an end to white male privilege, and to preserve and enlarge their constitutional rights.

He's being polemical, and yet, calling the dictatorship of the sociable to account, or holding the country club set to bourgeois norms and the gentleman's code isn't a bad thing.

Cut through some of Paul Krugman's polemics, and you'll read a similar point.


I very much ran with the nerds during my own time at Yale, but I did encounter people like Kavanaugh — hard-partying sons of privilege who counted on their connections to insulate them from any consequences from their actions, up to and including abusive behavior toward women. And that kind of elite privilege still exists.

That's likely so. Bourgeois norms are for everyone. Transgress them at your peril.
Posted by Stephen Karlson at 14:14