Armistice comes in the Great War. 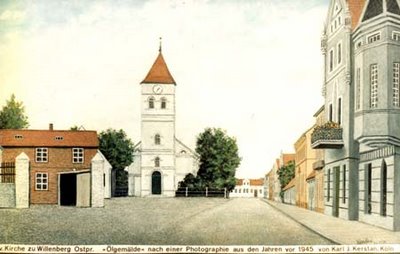 That's the evangelical church in Willenberg, Prussia, that figures in my family history, a small part of the conversion of immigrants into Americans that made up the Expeditionary Force.

The Great War was not the War to End All Wars, not even close.  After Armistice comes the Treaty of Versailles: the next twenty years are an intermission until the same tussles broke out again, this time with aircraft, improved electronics, and nuclear weapons.

Nor did the Great War make the world safe for democracy.  Not that Our Political Masters have learned anything.  "American foreign policy professionals and pundits somehow manage to look at our costly failings and the world's suffering—all that money, all that death—and think the answer is that the U.S. military should have done more, and smarter, and harder."


During World War I, the [American Association of University Professors] embraced the most repressive measures ever supported by the organization. Never before, and never again, would the AAUP call for the suppression of peaceful dissent. In part, the AAUP’s position reflected the stance of an organization eager for public approval and unwilling to sacrifice its limited credibility for the abstract principle of academic freedom during wartime. But the AAUP’s support for repression also reflected the strong support for the war itself among its leaders. John Dewey believed in academic freedom, but he also believed in this war to end all wars. Dewey convinced the New Republic’s editors to ban his former student Randolph Bourne from their magazine because Bourne disagreed with Dewey about the war (Mulcahy, 1996, 147). Even the victims of past repression supported severe wartime limits on academic freedom; Richard Ely wrote to a friend, “We cannot take the same position in time of war as we take in time of peace….A man who gives utterance to opinions which hinder us in this awful struggle deserves to be fired” (Gruber, 1975, 256).

We rarely hear Serious People rolling out the Moral Equivalent of War in support of other Grand Public Constructions these days, and yet the mind-set in Official Washington and on the Sunday shows is still the same: some federal agency should be doing more, and smarter, and harder.

I have no alternative but to repeat myself.  The task for the living is to continue to give young people, including immigrants, a country they can buy into, as well as to buy into the success of those young people.  More grandiose constructions, such as a world safe for democracy or a Liberal International Order: not so much.

That is all.
Posted by Stephen Karlson at 11:00