IN THE SAME BUSINESS AS THE IVIES.


NIU (8-4) won its fourth straight game, with Mikayla Voigt scoring 36 points and grabbing 10 rebounds to lead the way. Twenty four of her points came in the in the fourth quarter and overtime as she sparked the run that gave NIU the lead for good. After being held scoreless in the third quarter, Voigt posted nine points in the fourth, eight in the first overtime and seven in the second overtime.

Also stepping up was junior guard Myia Starks, who matched a career high with 25 points. She took only 12 shots, making seven, and was 11 of 12 on free throws.

Getting to overtime was hard enough for the Huskies, who trailed by eight in the third quarter, as the Bears continually answered NIU’s efforts with timely baskets. Brown was fervently denying Voigt the ball and was forcing other Huskies to shoot.

Yes, that's the anticipated game in which two of the "Starting Five" honorees of a few weeks ago played.

It got a bit more interesting, as Monday's heavy rain (had the temperatures been a little cooler, we might have been noting some heavy snow) revealed a leak in the roof of the Convocation Center.  (Well, if the Oak Island Money Pit floods, why not?)

The practice court is set up for spectators, as it's also the home court for volleyball.  The basketball courts barely fit the space, but then, that's how a lot of high schools roll. 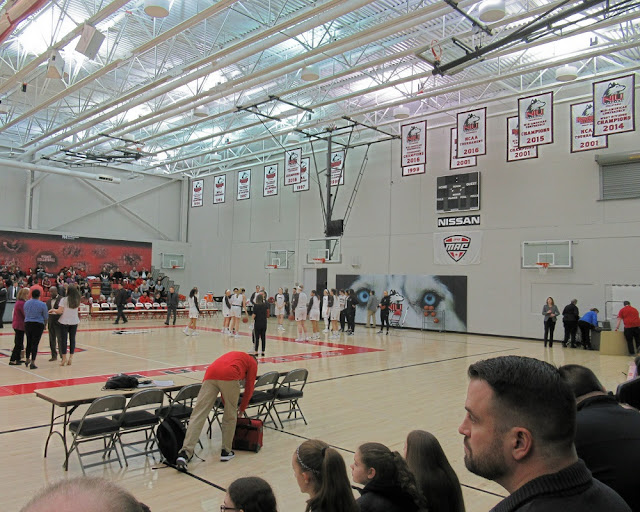 The teams agreed sometime before the game that Brown would use their home whites and Northern their reds, which are one of the road uniforms.  The substitute gym had the seats pretty much all filled.

Part of run-and-fun is finding the players who have the good shots.


"The reason I wasn’t able to shoot as much as was they were in a … full-deny [defense] on me, and I wasn’t able to get a lot of good looks with the basketball,” Voigt said. “But that’s when you’ve got to rely on your teammates. These guys hit wide-open shots, and that forced them to come out of of it and I think that’s kind of why you saw a bit of a turnaround.”

A team-mate, post player Ally May, noted, “Our guards just continually pushed the floor and we continually ran our lanes and we just got easy shots."

The pre-conference schedule included a visit from Yale in the opening game of the pre-season National Invitation Tournament, and this scheduled visit from Brown, which play two Illinois kids, and honored the tradition of scheduling some road games in the old neighborhood.  Thus, Northern Illinois goes 2-0 against the Ivies.  The extension to the academic enterprise is left as an exercise.
Posted by Stephen Karlson at 08:54