WHAT DIFFERENCE, AT THIS POINT, DOES IT MAKE?

The new mayor of Chicago is Lori Lightfoot, and the identity politics crowd are claiming all sorts of "firsts" for her.


You’ve probably heard the big news out of Chicago: the city just elected Lori Lightfoot as the next mayor. Moreover, she will be the only black lesbian mayor to ever run the city, and Chicago will be the biggest city to have an openly gay person at the helm.

But there’s more here than a victory for the identity politics crowd. Lightfoot’s win represents a victory for populism in Chicago, the nation’s third largest city.

Now don’t get me wrong here. Lori Lightfoot is no conservative, and she’s no populist in the Donald Trump mold. But her victory means that the days of the Chicago Machine may be over.

If true, it's true in part. I live far enough from Chicago that I can tune out the mayoral election.  One evening, WGN's talkers were talking about a mayoral forum in which several of the candidates stated that if they couldn't vote for themselves, they'd vote for Mx Lightfoot.  I later learned that in a previous forum, the modal choice was one of the Machine aldermen who subsequently got caught up in another corruption investigation.  (You profess surprise, dear reader?)

There's probably something for students of ranked voting in that story, in that Mx Lightfoot was a narrow winner in the primary and a dominant winner in the run-off: how many voters strategically picked a second choice in the primary on the expectation that their first choice wouldn't get through?

The reaction among the punditry is instructive.  Rick Moran of Pajamas Media, an Illinoisan, notes,


Winning the mayoral race in Chicago is not exactly like being elected captain of the Titanic, but it's close. Lightfoot will face a pension bomb waiting to detonate, out of control gang violence, massive mistrust of police by the black community, crumbling schools, a disappearing tax base, and neighborhoods that resemble war zones.

But the bigger story in the city might be the defeat of several incumbents by self-identified socialists and progressives, who successfully preached the gospel of change in order to defeat several long-time city hall incumbents.

Chicago is still fifteen square miles of privilege surrounded by the Third World, and with the improving weather will come the wilding. 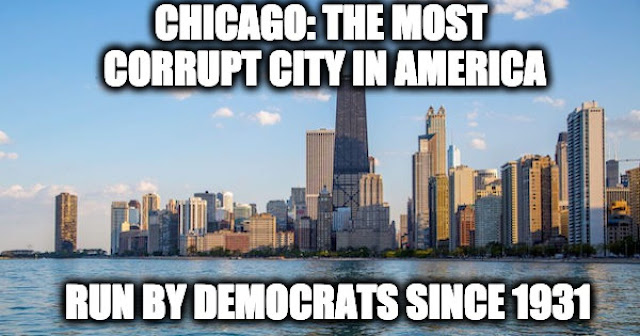 What's interesting, though, is that the new mayor is going to catch hell from her left flank.


"I'm excited to say we are going to have our first black female mayor in the city of Chicago," Christopher Cook of 100 Black Men, a group that mentors the city's black youth, told In These Times last week. "But when that's all said and done, what changes are they going to make? We can't really predict right now, but we can hold them accountable."

The post from which I'm extracting these quotes includes a number of Twitter images and additional response. For example,

"Will she fulfill her campaign promise to end rip-off development deals like the Lincoln Yards TIF?" Illenberger added. "Mayor-elect Lightfoot's commitment to change will be quickly tested."

Others were more immediately critical. In a series of tweets, Charlene Carruthers, a Chicago-based black, queer feminist community organizer and writer, expressed frustration with the excitement over Lightfoot's win, arguing that "we are going to have to fight the Lori Lightfoot administration tooth and nail."

There's nothing quite like an intersectional Oppression Olympics, is there?


Carruthers also highlighted the #StopLightfoot campaign, launched by "a group of young black, brown, native, white queer, trans, and gender-nonconforming organizers and people who love Chicago, and have worked for years on issues of police violence, immigrant justice, LGBTQ liberation, and more."

The newly-elected "democratic socialists," who don't come off as flatland versions of sewer socialists, are also ready to rumble. Lucie Macias and Leonard Pierce lead the Chicago cadre, with the following calls.


With at least five and as many as six socialist aldermen, Chicago’s politicians and the ultra-wealthy, from the mayor’s office to corporate boardrooms, need to understand that business isn’t going to continue as usual in this city.

The new socialist aldermen are going to fight for an agenda of expanding affordable housing, protecting immigrant rights, fully funding public schools, expanding public services and more. That agenda will be paid for not by raising taxes on working people, but by taxing the rich.

Their constituents live outside the fifteen square miles.


For too long, Chicago has been governed by Democrats who have been happy to give the city away to wealthy real estate developers and other corporations while gentrifying neighborhoods, privatizing public services and carrying out a brutal agenda of austerity.

Tuesday’s election results show that it’s a new day in this city. Chicago’s new democratic socialist and progressive aldermen are ready to fight that austerity agenda tooth and nail, to win a city for the many — not the few.


I visit about 25 campuses a year, and increasingly I see situations where students know exactly which character to play when they step into the theater of ‘the diversity program’. People of color talk about how oppressed they are, everyone else nods along sympathetically.

But many students are smart and honest enough to know that this is chiefly a performance – everyone is playing a part, including the professional leading the program. And at least some of those students, some of the time, are like the young woman I met a few days back. They worry whether a paradigm that was supposedly designed to advance them is having its intended effects.

Absolutely we live in a world where structures of racism, sexism, etc advantage some and disadvantage others. But after you have called those structures out, what do you do next? Is constantly telling stories about how oppressed you are really preparing you to be a powerful agent in the world? A good doctor or nurse? A successful entrepreneur? An effective attorney? The next mayor of Chicago?

Me, I’d put my money on the advice given by Ann Lightfoot: meet challenges, take advantage of opportunities, be strong and fearless, prepare yourself to be in charge.

It's the conservative commentators, who live outside Chicago or recognize they have no say in the governance of Chicago, that wish the new mayor well.

Victory Girl Kim Hirsch, "Congratulations to Lori Lightfoot. She beat the Chicago Machine, and I hope her victory is the start of better days for Chicago. The city needs all the help it can get."

The editorial board at Chicago's Tribune are optimistic.


How Lightfoot embraced running for mayor, and how Chicagoans citywide embraced her, brought refreshing change to Chicago politics. She broke the typical campaign template and won. We think she’ll govern just as capably.

She takes office shortly.
Posted by Stephen Karlson at 14:56