Chess-playing computers have trouble handling quiet positions, although their capabilities are apparently great where complicated tactical variations are concerned.

The challenge in contract bridge is in acting on incomplete information to reach a playable contract.  Some bids, such as any No Trump opening, communicate specific point counts and generally deny a long suit.  The five-card major convention says something about the length of a suit, albeit with some uncertainty about the point counts involve.

Then there are the preemptive bids, and that way can lie disaster, as in this example. 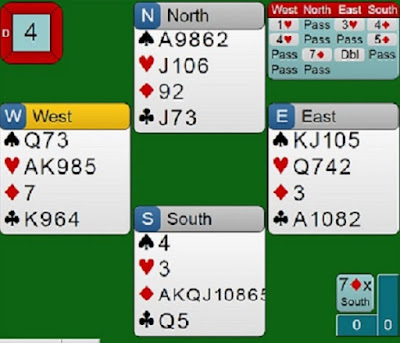 Perhaps I shouldn't have overcalled with that Four Diamonds, and perhaps it might have been prudent after that to let the defender bots attempt that Four Hearts rather than bid game myself.  But what ever prompted the algorithm to bid a slam in Diamonds?  East bot bets, "You can't make that."

Indeed not.  West leads the ♥ King and continues with the ♥ Nine, that falling under my ♦ Four.  I can create a void in Spades, cashing the Ace, and attempting a finesse of the ♣ Queen.  Yup, the King is in the West.  (That's another probability point: expect the highest outstanding honors to be in opposite hands, rather than in the same hand.)  Club Six, I duck in dummy expecting the Ace, the Ten picks that up.  Then East attempts to cash the ♣ Ace, well, I'm void in that and have a convenient ♦ Five to promote.  Now I can rattle off the rest of the tricks leading trumps, although note the opportunity to cover the Six with the Nine to lead the ♥ Jack back to another ruff.

Ten tricks, which is to say, my preempt would have won, but bidding for more was a mistake.
Posted by Stephen Karlson at 13:19