Anthony Grafton reviews, for The New Republic, Louis Menand's The Marketplace of Ideas: Reform and Resistance in the American University.  Might make for interesting reading, although it might be better for my blood pressure to extend retirement from teaching to include retirement from academic politics.  The review suggests I'd find its thesis congenial.  The humanities, after all, are cubicle zero of the rot that has lowered higher education.


Our space is shrinking: only one-third of American undergraduates still major in the arts and sciences, and less than a third of them in the humanities. We get no respect: the media stick to covering our dysfunctions, from the Paul de Man affair to the butchering of Robert Frost’s notebooks. (All good editions are alike, perhaps, and every bad edition is bad in its own way.) But our worst enemies are ourselves: from William Chace, who argues that we helped to drive away our own students by dismembering the curriculum and substituting “for the books themselves a scattered array of secondary considerations (identity studies, abstruse theory, sexuality, film and popular culture),” to Mark Taylor, who declares that disciplines are obsolete and that “there is no longer a market for books modeled on the medieval dissertation, with more footnotes than text,” to William Deresiewicz, who complains that we cannot talk to plumbers.

A lot of academic writing is bad because people whose tenure depends on reading and understanding it are the only people who have to make the effort to read it. Put it out before people who have other things to do, and don't be surprised if those people cherry-pick the egregiously lunatic bits and laugh them to scorn.  Professor Menand, however, appears to be interested in preserving those parts of higher education that are worth preserving.


Menand focuses on the elite institutions that still concentrate on providing an education in the arts and sciences, and argues that they have failed to respond to these and other painfully obvious problems because they remain stuck in patterns that were set a century and more ago. In the late nineteenth and early twentieth centuries, he explains, scholars set out to create a limited free space in which they could set standards for the fields they practiced and for undergraduate and graduate training--a professional space dedicated, like the legal and medical professional spaces that took shape at the same time, to pursuing the general good rather than personal gain.

University administrators, such as Harvard’s Charles William Eliot, cooperated. They supported academic specialization, creating independent departments in which professors could pursue and pass on their research interests. They insisted that no one should enter professional study, in law and medicine as well as in the disciplines, without first having studied the liberal arts as an undergraduate.

Put another way, the ability to distinguish the profound but poorly-posed from the nonsensical matters.  In higher education, future attorneys and future grocery store managers alike benefit from knowing those things.  There's another history to be written about how a core curriculum became "distribution requirements" with rent-seeking that would do K Street proud.


The traditional college and university reached its peak after World War II, thanks to the baby boom and the Cold War. Graduate education grew even more quickly than undergraduate education, as universities expanded thanks to showers of federal and state money. But the peak was sharp as well as high, and by the 1970s the ground beneath it began to shift. In some respects, the results were positive: as the baby boom ended and colleges had too many places to fill with white males, they opened up to women and non-white people of both genders. But the financial crises of the time set limits to what had looked like permanent expansion, and the massive group of faculty who obtained permanent positions in the 1960s suddenly had few jobs to offer their successors. With stunning speed, the Land of Cockaigne became the Slough of Despond.

Yes, in those days, there was money for the study of poverty or for the development of rocket scientists, or for applied mathematics for military purposes.  Prosperous times, though, make for wishful thinking: we can have the broadly shared prosperity, without the academy's complicity in the military-industrial complex.


Wracking intellectual crises followed these social and institutional changes. Critics--Kuhn, Geertz, Rorty, White--reared in the old disciplines taught generations of younger scholars that the boundaries of their fields were arbitrary. By doing so, they helped to create Theory--even if a number of them felt, when they saw what became of their ideas, like Milton’s Sin after she gave birth to Death. Meanwhile, younger scholars and students insisted on exploring and settling new territories: social history; literature by women, by people of color; the collaboration of social scientists with government. By a familiar paradox that Menand nicely brings out, the harder anyone tried to defend the old boundaries of the disciplines, the more arbitrary they now appeared. Innovation took root outside the disciplines--in programs and centers, rather than departments--places where scholars from varied disciplines could meet, teach, and debate, and that were vested with glamour and drama, but usually did not become power bases with jobs to fill. And after the anti-disciplinary revolution came the settlement: a mixed one, with interdisciplinarity reigning in English, an eclectic postdisciplinarity in anthropology, and many flowers blooming in history--and traditional rigor in philosophy.

In a generation, we go from "Power to the People" to "Would you like fries with that?"

It's a long essay, and, if anything, it suggests, pace the dean at Pioneer Valley Community, that the Burkean tendencies of tenured faculty are emergent and evolutionarily stable.


Menand’s loss of patience, or faith, or interest, in specialized knowledge actually underpins his major proposal for reform. Toward the end of his book he suggests--and not for the first time--that universities could ease the misery of doctoral candidates in the humanities by radically shortening their programs. Abridgement, Menand argues, would not cause serious intellectual problems. After all, “normally a dissertation in the humanities does not require extensive archival, field, or laboratory work.” What on earth is he talking about? The students I know in English departments--admittedly, most of them concentrate on the period from 1500 to 1800--learn the languages and literatures that the English writers whom they study knew and emulated, and discover new and gripping texts in manuscripts, and reconstruct the institutions of publishing and literature from the archives, and think hard about hard texts. All this takes time. In history--a field which awards as many Ph.D.s each year as English--you certainly cannot write a dissertation without doing archival work or fieldwork or both. In classics or German or East Asian studies, you must master not only languages but also cultural canons--in addition, these days, to the works outside the canon that have suddenly revealed their interest. And then there is musicology, where you need the languages, and the archives, and the music. Anyway, there already exists a way to do a limited amount of reading and a short piece of research in complex, demanding fields like this: it’s called an M.A. Making M.A. programs take longer and rechristening them as Ph.D.s is a bit like chaining buses together, putting them on tracks, and calling them a train.

Don't give the administrators any ideas. 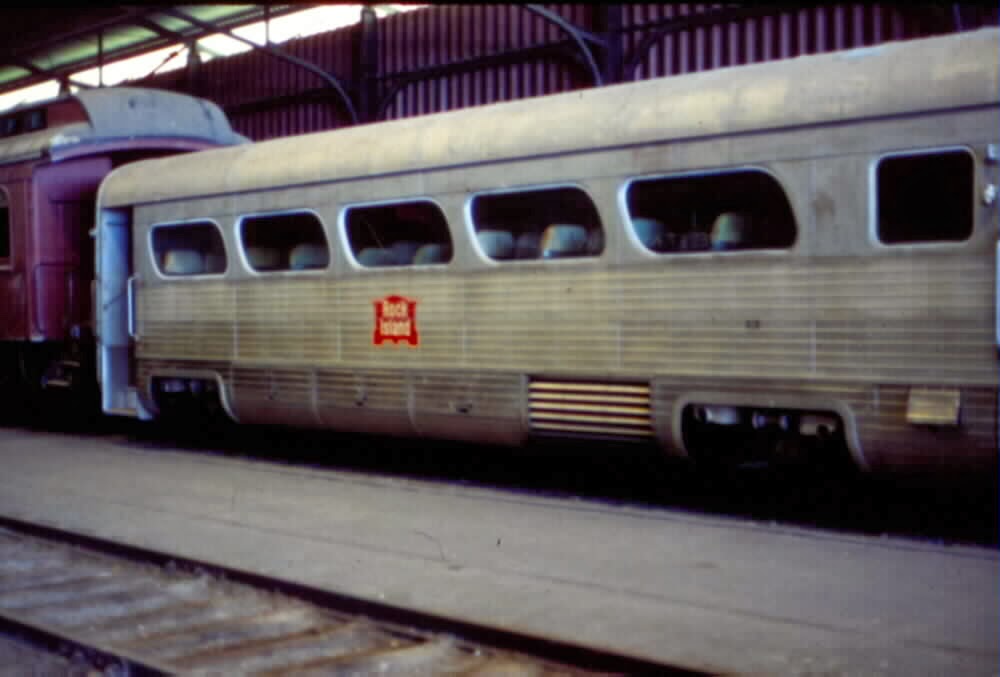 You're looking at a car from the General Motors Aerotrain, in preservation at the National Railroad Museum in Green Bay.


The [locomotive] was attached to a series of GM built 40-seat intercity bus coach bodies that had been modified to run on an air-suspension system, the ride quality was infamous for being a little on the rough side and sadly the Aerotrain remained a sole unit, destined to be a curiosity in GM’s long and varied history.

It failed as a New York to Pittsburgh train on The Pennsylvania Railroad. It failed as Union Pacific's City of Las Vegas.  It finished revenue service on the Rock Island commuter service in Chicagoland.  That's no accident.  The Burlington and Chicago and North Western, catering to a more upscale clientele, introduced air-conditioned gallery cars, and to this day there is a subscription club car on the Kenosha service calling at the poverty pockets of Winnetka and Highland Park.  The Rock Island Line was for the office help, and reverse-commuters to factories.  I can think of no better metaphor for higher education's sub-prime sector than the Aerotrain, with half the coaches facing each way, offering a simulacrum of transportation for people without the clout to have gallery cars assigned to their trains, let alone the means to run a subscription club car. 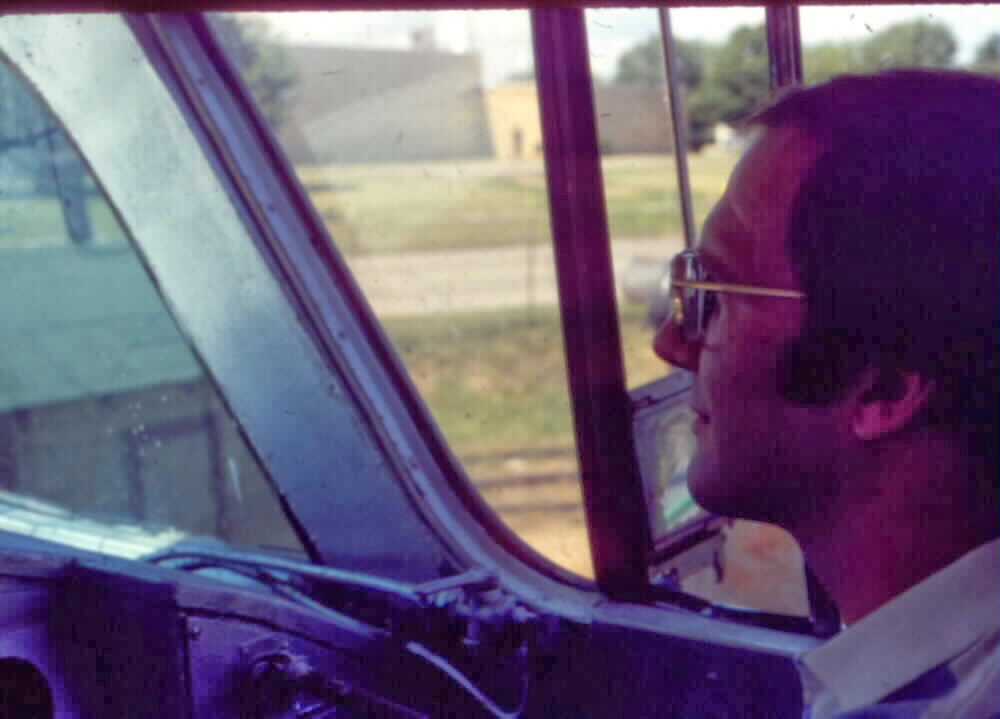 I had more hair and fewer wrinkles in July of 1984.  The diesel might have borrowed a wrap-around windshield from the Chevies of the mid-1950s, and the tail-fins on the observation-lounge would not have been out of place on a Cadillac of the era.

Step aboard, though, and enjoy the rough ride.  Run-down track, demoralized crews, chronic mechanical failures.  Finish the argument yourself.
Posted by Stephen Karlson at 11:43