IT'S REALLY A CASE FOR BETTER MANNERS.

A recent "contribution to the literature" by Brighton's Dwight Turner "considers the role unconscious white supremacy plays within counselling and psychotherapy" and proposes these fields be "decolonialised," whatever that means.  Take the analysis for what it is, or not, but consider the privilege iceberg he uses to illustrate his argument. 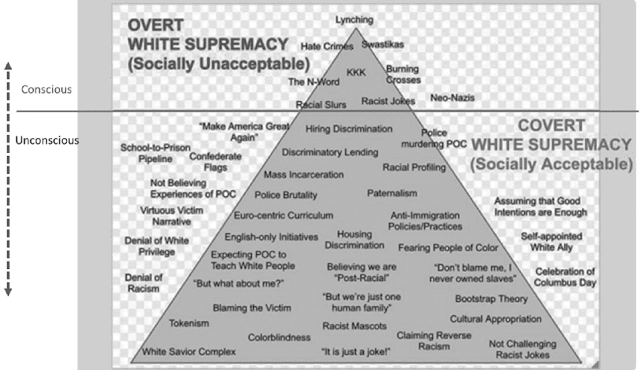 "Covert and Overt White Supremacy" retrieved from Research Gate.

Yes, there's enough questionable social science, not to mention question-begging and affirming the consequent, in that chart to keep conscientious critics busy until the next equinox.

Note, though, that "It is just a joke" might be a tactic used by a condescending comedian at a gathering of the hip and trendy, and "challenging elitist jokes" might be as effective a strategy as challenging an attempt at humour that comes off as racist, or classist, or one of the other Forbidden Practices in Social Justice Warrior World.

Read up: "But we're just one human family" is close enough to the collectivist lie that "we're all in this together."

Keep climbing.  "Paternalism" and "Assuming that good intentions are enough."  Sorry, no.

There might be better ways of conducting therapy, or implementing public policy.  Covert priors -- not necessarily those of the white supremacist -- might well be obstacles.  Look for a more general approach.
Posted by Stephen Karlson at 14:49