ONCE I BUILT A RAILROAD, NOW IT'S DONE. These might be the Good Old Days of freight railroading, but the network we see did not emerge fully-capable out of anybody's grand design, or to reflect any one business model.

Although DeKalb offers ample opportunity to view Union Pacific in action, not too far away are the relics of a number of other railroads long since gone.

This weekend's Railroad Reading visits crossings along the Chicago Great Western, a property that probably shouldn't have been built, although the desperation spawned of that discovery led its managers to be pioneers in advocating regulated pricing and in developing new kinds of service. (More about that another day.)

The Sycamore station building was moved to the north side of town, where it is a private residence. The handcar shed has been removed, but the handcar setouts remain. In the background is Illinois Highway 23. The Woodstock and Sycamore interchanged here. Motor cars ran north to Genoa and Marengo alongside 23 as far as Genoa. 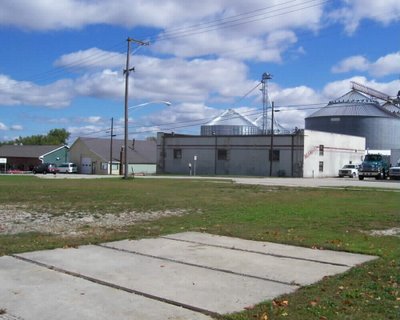 There was a small yard where the DeKalb branch, built at the behest of barbed wire barons who didn't like paying the Chicago and North Western's rates although this didn't stop them from using DeKalb as the basing point for reckoning delivered prices for barbed wire. 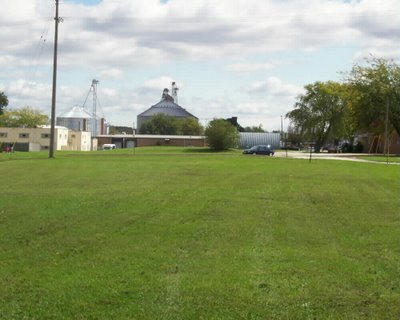 Chicago and North Western branches from Cortland and Spring Valley joined a few blocks south. The tracks went north to Belvidere, Caledonia, and Beloit. At one time there was a local passenger train service from DeKalb to Madison. The derelict spur track connects behind the yellow-brick building with that line, which was lifted in 1942. It is difficult to determine from the remaining construction whether the crossing was grade-separated or at a level that was obliterated by subsequent industrial development. 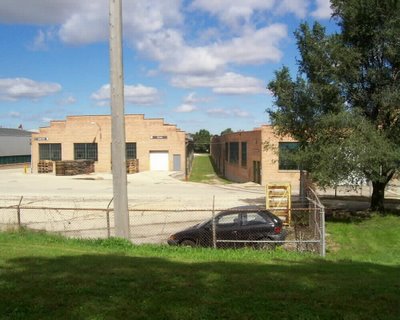 West of the crossing of Annie Glidden Road is the Wilkinson-Renwick nature preserve. The crossing of the Chicago Great Western with the Chicago Milwaukee & Gary, which became a Milwaukee Road property in 1922, is in a marshy area and its relative unattractiveness as a farm site meant that some native unplowed prairie is near trackside. (Prairie conservationists, however, have to weed wild plants and trees that were introduced for other purposes.) The Chicago Great Western grade is paved as far as a boardwalk over the marsh. The Milwaukee line was a working railroad until the early 1980s. The grade is now a hiking trail a few hundred yards to the north. 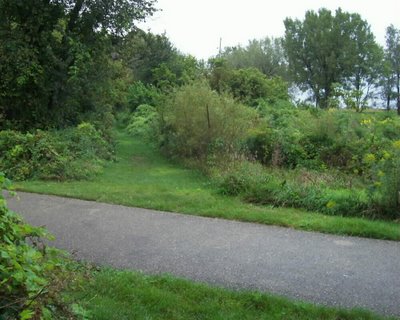 West of the boardwalk, a bit more of the CGW grade is still clearly a former railroad grade. Modern plowing methods (those tractor pulls aren't just for show) have obliterated much of the railroad where the right of way was an easement through a farm. 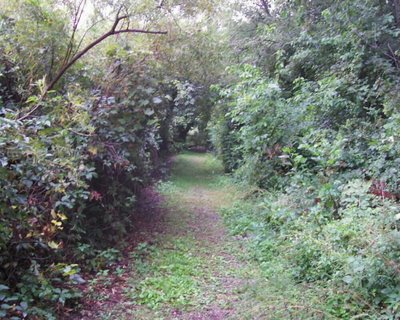 The next crossing is at Holcomb, where the former Burlington-Milwaukee Flagg Center - Davis Junction - Rockford line is still in operation. The tracks are behind the tall grass. A few traces of a switch along the CGW are still visible in this road. The grade east and west of Holcomb is indistinguishable during growing season. Perhaps come late November some clues to its location will appear. 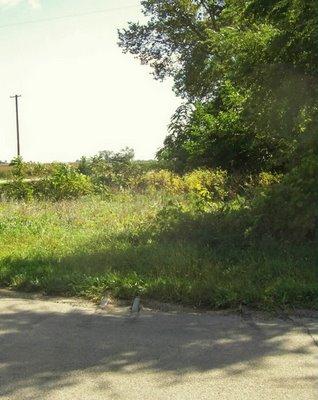 The Chicago and North Western abandoned the Byron to Galena Junction section of the former Chicago Great Western in 1971. The section east of Byron struggled on for a few years. An interchange track with the Milwaukee became an industry track now worked by the Milwaukee's successors. The right-of-way west is still clear. 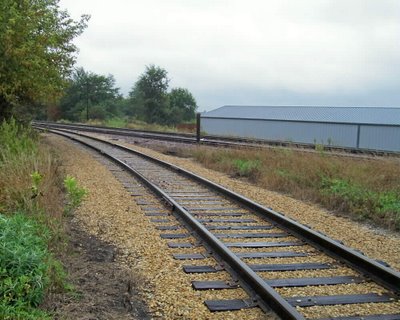 This crossing is easy to find as it's just behind the Byron High School (is their fight song "On With Byron!" set to guess what?) parking lot. 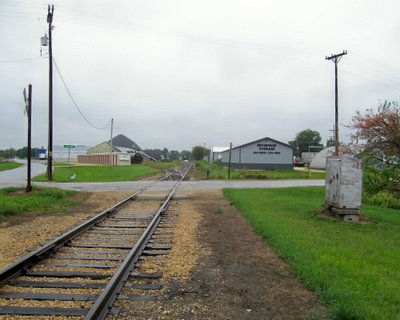 The Illinois Central Railroad's original Main Line of Mid-America was a Cairo-Centralia-Bloomington-Freeport-Galena line intended to tap the lead mines of the North West Frontier. The Centralia to Chicago, now the main line, is in the original plan, but as a branch. The Centralia to Freeport is mostly abandoned now. Here, the grade reaches the south shoulder of Baileyville Road near what the Illinois Central called Dunbar and the Chicago Great Western called South Freeport. 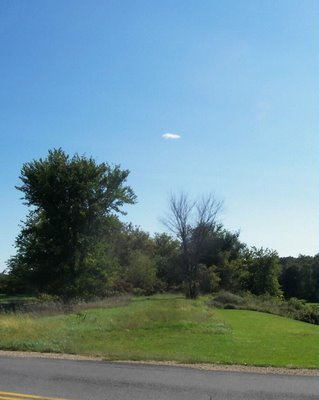 Face north, there's a bank of approach lights for the Albertus Airport on the right-of-way. The gap in the treeline shows the path of the railroad. A 15-minute section map from the 1930s shows an overpass and interchange facilities with a wye at South Freeport. A more recent 7 1/2-minute section map shows the runway over that site. 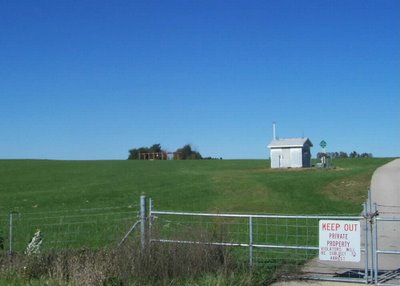 Just north of the S-curve in Baileyville Road is this view of the farm fields back toward the trees that mark the location of the Illinois Central's fill. Does "CGW" stand for Corn, Goldenrod, and Wheatfield? 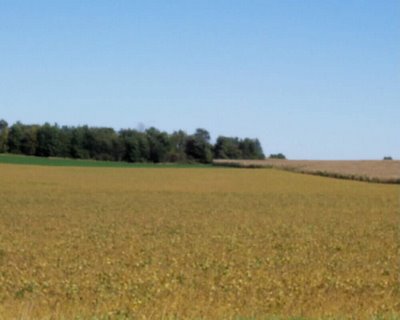 About a mile south of the Silver Creek and Stephenson, the Racine and Southwestern crossed Illinois Highway 26. The side road leads to the Freeport Humane Society. 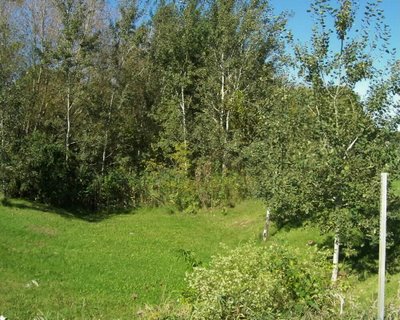 This CGW mile marker (the west face reads "C 109") escaped the tender mercies of the scrapper, the farmer, and the highway department. That's the Cold Spring Shops inspection car parked approximately on the Southwestern, which was resurfaced along with Highway 26. 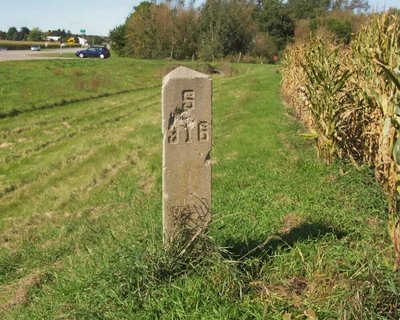 The crossing itself is in the middle of a swamp. These pilings supported the Chicago Great Western. There are a few more west of the Milwaukee. 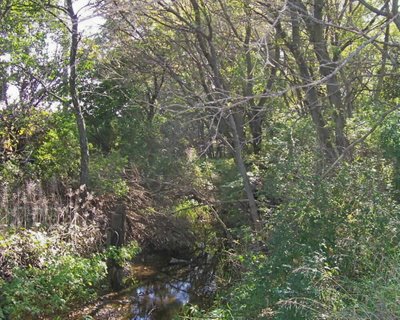 This photo is at the crossing site. The trees have not yet had a chance to start growing on the Milwaukee, but in a few years it will be difficult to tell from the underbrush exactly where the right of way was. 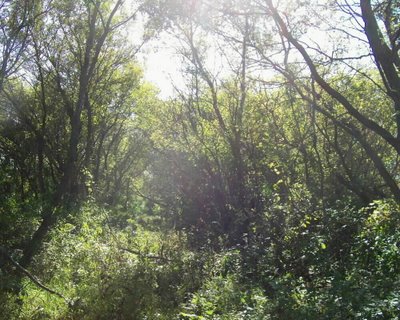 The underbrush, should you wish to verify this location for yourself, runs to plants with picky spines and seeds.
Posted by Stephen Karlson at 11:53