THE QUARTER THAT WE GAVE THEM WAS THE BOTTOM OF THE SEA. That's been the fate of salt-sea pirates out looking for their fee. Uncle Jimbo of Blackfive explains the rules of engagement and the limited role of National Command Authority. 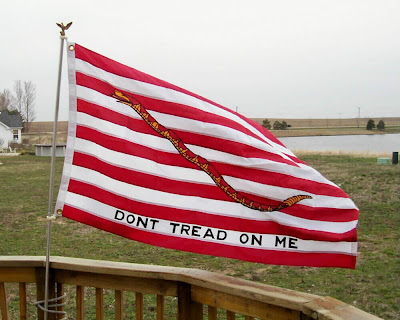 OK, time for Executive Grow-A-Set Order No 1. You can call it the Obama Doctrine. Anyone engaging in acts of piracy or terrorism on Americans anywhere in the world or in areas where American forces are lawfully operating can have his coconut drilled at any time, based on the discretion of the commander on scene. No further discussion.

I did find a dissenting voice. Form your own impression of an author who puts scare quotes around pirate.

Remember, some Somalis—and other international observers— do not exactly see the “pirates” as being 100% unjustified in their actions. This form of “piracy” really escalated after the 1991 collapse of the Somali government and Western ships allegedly dumping waste off the Somali coast and devastating the Somali fishing industry, a primary source of income in the Somali coastal areas where many of the “pirates” are based.

How shaking down Russian freighters and U. S. container ships obtains redress against the Swiss trash hauler or Italian Mafia that supposedly perpetrated the toxic waste dumping escapes me. It is amusing, however, to read libertarian sentiments attributed to St. Augustine in a socialist tract. Rick Moran isn't amused.

Meanwhile, our intrepid Somali pirates know they have western liberals on their side as long as they can show that the reason they board ships, terrorize people, take crew members hostage, kill with impunity, and barter for ransom is because they are only acting in “self defense” against rancid capitalists and western governments who allow the practice of dumping and illegal fishing with a wink and a nod. This appeals to many on the left who will now see the problem as a question of “fairness” and will agitate that the president forgoe knocking the stuffing out of pirate infrastructure in favor of a “negotiated” solution. Piracy will continue, hostages will still be taken, governments and businesses will still be forced to pay ransom - but liberals will feel better about the whole thing.

And Somalis will be no better off.

I will note, however, that there is no evidence of the pirates killing with impunity (not yet, anyway: to do so destroys a tradeable asset) and the bartering for ransom is with the sanction of maritime insurers. To pay the Danegeld is to never get rid of the Dane.
Posted by Stephen Karlson at 23:39