HIAVATHASKI. The latest Destination: Freedom invokes the Cold War as a way of thinking about the high speed rail gap.

Celebrating our victory in the Cold War — how we’ve done since then is a little more complicated — we like to think about the unfortunate Russians, these days watching their Soviet-era infrastructure crumble and slowly riding nowhere on the Trans-Siberian Railroad.

In fact, some people were discussing that just the other day — on the brand-new high-speed rail system between Moscow and St. Petersburg. What they were discussing was the country that really has transportation problems.

As Ansgar Brockmeyer, head of public transit business for Siemens, the German company that built the new line, explained to The New York Times, the United States “is a developing country in terms of rail .”

That’s us. Leading the world in cell phone game applications, but the Namibia of high-speed trains.

I hope passenger rail advocates will come to understand how damaging such comparisons are to their cause. North American freight railroads handle tonnage in ways that the Russians and Chinese are still pressed to match, that their former satellites buy General Electric upgrade kits or used diesels to come close, and that the industrialized social democracies to their west hire North American managers to do.

There was a time, however, when the Soviets were behind the United States in high-speed rail. 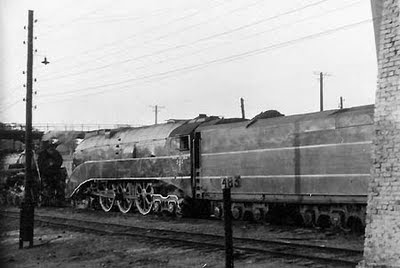 The NKPS and SZhD built three high-wheeled 4-6-4s, one with eight foot drivers, as a way of speeding up the October Railway. It's that line that has since become Russia's first high-speed railroad project. The 4-6-4s gave way to electrification, and I may have a telephoto shot of the prototype ER200 souped-up elektrichka that I took just before midnight in Piter. (Telephoto shots are straightforward at midnight on July 4.)

On our shores, Solve Climate suggests that New York to Washington be rebuilt to 220 mph standards (that will keep eminent domain lawyers busy) first, followed by Boston to New York (the New Haven's sale of the land for its line relocation to the Connecticut Turnpike still hurts). The Chicago-area services are behind California in that organization's priorities. Regular readers know, however, what that Soviet Baltic was designed to imitate, and what timings were possible with steam locomotives running on jointed rail protected by semaphores.

Posted by Stephen Karlson at 23:25