In the days before any kind of broadcast media, or tax-supported zoos, the big entertainment of the year was the arrival of the itinerant circus.  It was a hard-knock life (still is) and a marvel of logistics.

Townspeople would have plenty of advance warning that the circus was coming, because the advertising car, in town in advance with its brigade of tack-spitters, would put big posters on any vertical surface that would allow it. 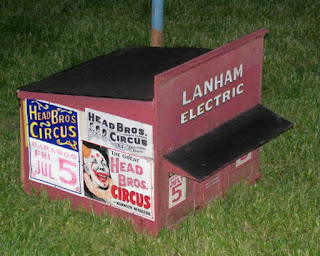 The Head Brothers Circus is a 1/12 actual size model of a 25 car train circus.  It was begun as a modeling project by Herbert Head, and his children and grandchildren continue the tradition of setting it up and tearing it down in real time, just like the real travelling circus did.

Before dawn, the train would arrive in town and position the cars at a convenient road crossing for the wagons to be moved to the show lot. 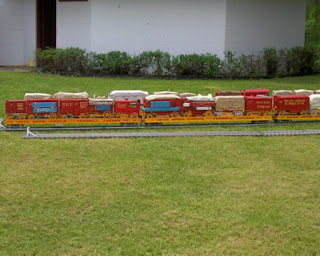 The cars containing the horses, elephants, and possibly camels and a walrus, have not yet been switched out.  At far left are the four wagons of the dining department along with the mechanical stake driver.  The travelling circuses ability to move up to a thousand people, feed them, set up the show grounds, then take it all down and move it to the next town, intrigued even representatives of the Prussian military.

Many circus workers did their job only for room (a shared bunk in an old coach) and board (three square meals in the cookhouse).  Such a job gave the worker the opportunity to check out lineside communities for possible paid work.

Such workers would be issued a breakfast ticket upon completion of early morning chores.  Here, the cookhouse is preparing breakfast.  The show lot is being laid out, but no tents are up yet. 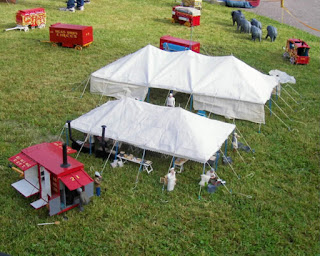 Look closely at the closest wagon: there is a smoke generator in use while the oatmeal is being prepared.  No parade today, as the calliope is positioned near the midway entrance, and the rubber mules are on hand for heavy hauling. 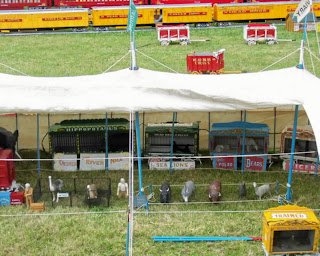 The midway takes shape.  The bannerline and sideshow top are in place, with the menagerie in the background.  It must be getting close to show-time, as the calliope has steam up. 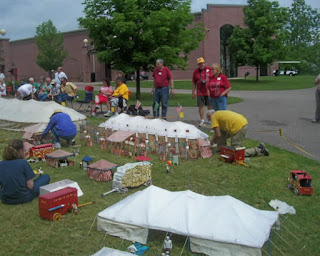 Balloon vendor at entrance, white and red ticket wagons, a couple of sales tents.  Pachyderms have moved into the menagerie.  Spectators are buying sideshow tickets now, and looking at the curiosities. 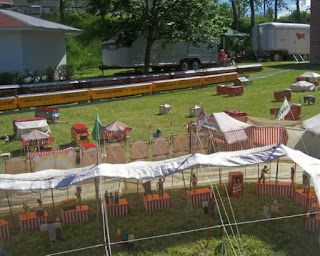 Immediately behind the sideshow is the main entrance to the Menagerie Top and Big Top.

Spectators are looking at the animals, buying Cokes and other edibles from the grease joint, and heading to the matinee. 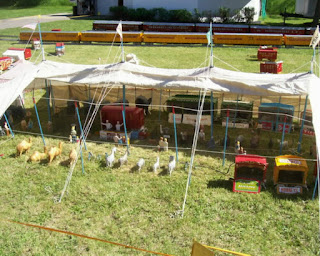 This model includes animation of some of the animals caged and staked in the menagerie.  The circus acts are also animated. 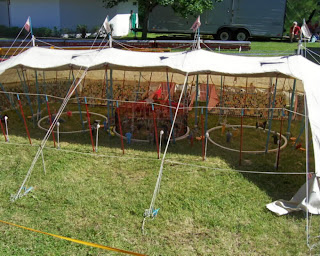 We now have the circus lot with all the tops on and up.  The back lot includes dressing rooms, stabling for performing and draft horses, and a variety of utility tents including the blacksmith. 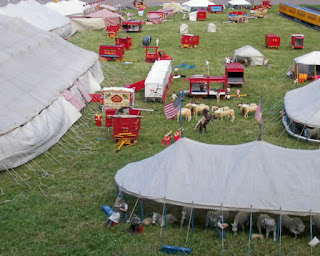 Most of this activity was missed by spectators, including children of all ages.  In the middle ground are three identical cages for the performing cat act, and the wooden passageway to the arena in the center ring.  The dining department is still up.  It has served lunch.  It will serve an early supper, sometime around 5 pm, and when the last performers from the matinee are fed, it will be the first element reloaded on the train.

It's twilight, and the evening performance is under way.  The dining department has been returned to the train.  It was first off in the morning, and it's first on, in order to be first off, tomorrow morning in another town. 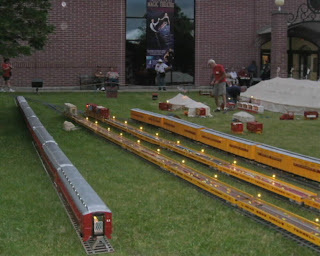 Once the menagerie and marquee are loaded on the train, there is an opportunity to sneak into the Big Top for a picture. 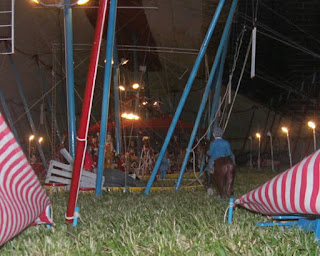 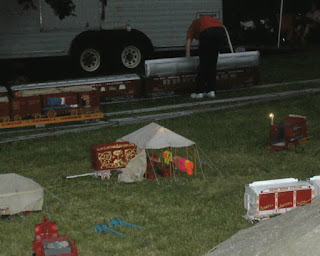 Show's end, and some of the smaller tops and poles are ready to be loaded. 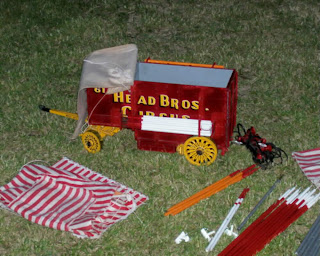 The same wagon, with everything stowed and secured, at the runs for the pullover team. 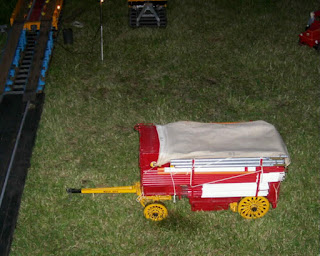 And so it goes, into the night, until the last equipment is stowed, the light plant shut down, and the train made ready to leave. 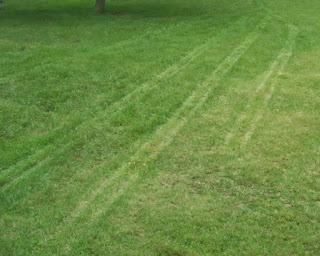 It's a pretty substantial train, with tracks leaving marks on the lawn the next morning.  One reason there aren't many circuses on the rails any more is that a lot of the small town railyards and delivery tracks that might have served the circus have been torn up, and the connecting lines abandoned.
Posted by Stephen Karlson at 14:17