Yes, white flags by day, and white lights by night, are the traditional marker of an extra train.  With centralized traffic control, the necessity of identifying extra trains for the benefit of tower operators and other train crews isn't so urgent.  But there's an older tradition also involving flying a flag: at Chicago's Wrigley Field, there are flag hoists indicating the standings, division by division, and (it probably began in the era of day baseball) the outcome of the day's game is revealed to all passing by with a blue W rampant on a white flag, or a white L rampant on a blue flag.

Last night, the Cubs got to #FlyTheW on the last game of the season.  And commuters on the South Shore Line, in case they're not taking the day off with a hangover, get the word. 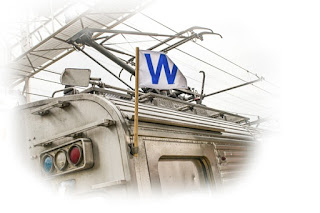 But in Cleveland and Toronto, and unlike Washington, D.C., the rapid transit would be available after the games ended.  So, too, with the South Shore Line.


To do its part, the Northern Indiana Commuter Transportation District's South Shore began running a single extra train after Cubs home games during the playoffs departing Chicago one hour after the games ended. For Major League Baseball's World Series, which moves to Chicago on Friday, the trains will depart 90 minutes after the last out.

When the Cubs win at home or on the road, W flags adorn the South Shore trains through the next day.

The extras are called, despite the interurban tradition of the owl car living on on the South Shore.


The idea for the extra trains sprang from regular-season night games when South Shore riders complained they left Wrigley early rather than wait for the 12:45 a.m. homeward train.

From Millennium Station, five miles and a short walk from Wrigley by the Chicago Transit Authority Red Line, the Cubs Extra runs express to Hegewisch on the Illinois-Indiana line making regular stops from there to the Carrol Avenue station in Michigan City. [South Shore marketing vice-president] Parsons says the W flags are a first for the line, and they are considering something similar for other Chicago pro teams.

As of this writing, Chicago authorities appear to be scheduling the celebratory parade for Monday. Expect to see interurbans displaying signals and running as extras.

To this day, a blue flag on rolling stock is a warning that the car is not to be moved.

SECOND SECTION:  The parade will be Friday.  Details to follow.
Posted by Stephen Karlson at 11:44