IF YOU CAN'T BE FREQUENT, AT LEAST BE DEPENDABLE.

It has long been a Cold Spring Shops position that Passenger Rail operations be frequent, that trains make dependable connections with each other, and that the value is in the intermediate stops.

Let me offer, dear reader, a meditation on these themes inspired by the first leg of a recent trip.  There is a dependable Regional Rail connection that gets to within twenty miles of DeKalb. 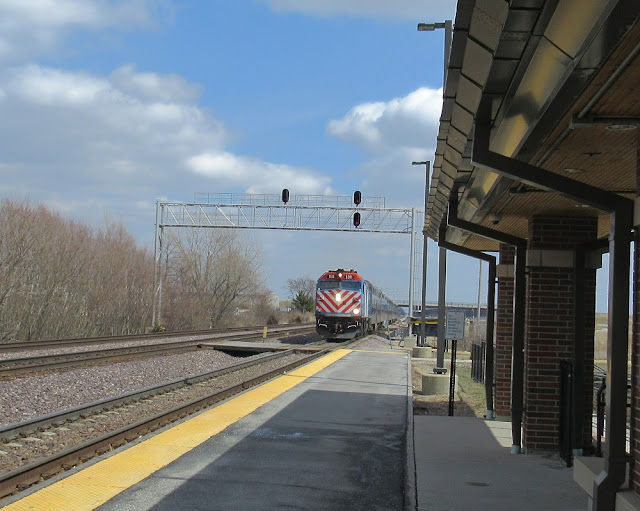 That's a seven-car formation from Chicago that will form the 2.18 departure of Train 52 for Chicago.  There's no snow on the ground, but it's still chilly, and additional snow storms are on offer for the upper Midwest.  Below is the view out the back door on the morning of April 9, just before this adventure began. 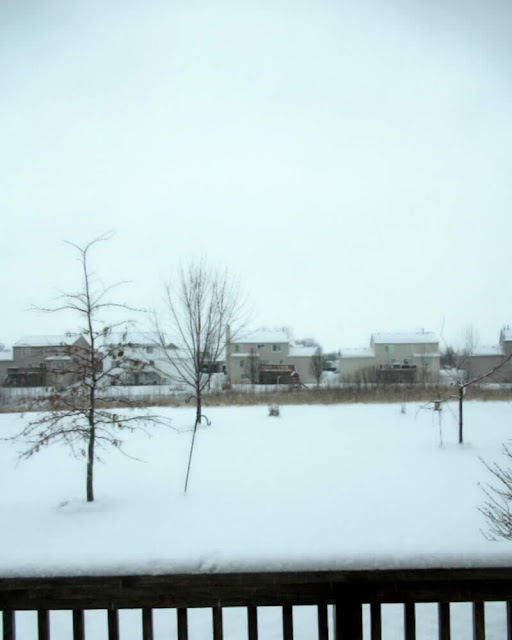 We arrive Chicago as the evening rush is taking shape.  The Metropolitan Lounge is filling, as sleeper passengers from the arriving trains await the boarding call for their onward trains.  All the trains from the west are on time or close enough to time that Amtrak will not be providing lodging and arranging replacement space tonight.  There's now a vendor selling canned beer to complement the bag snacks and pop currently available gratis.  Buy a Blue Ribbon.

I'm holding space on Thirty, and understandably apprehensive about the tender mercies of Norfolk Southern across Indiana and Ohio.  Get to talking with a couple enroute somewhere in West Virginia on Fifty.  (You don't want a cross-country connection involving the tri-weekly Cardinal to blow up.)  Buy a round of Blue Ribbons.  They're called before Thirty is.

Leave Chicago 6.39 (by my watch, not synchronized with standard clock: with gates closed five minutes before scheduled departure, hold 7.30 reservation for dinner.

Here, a note on dependability.  Company at table includes two women of Fort Wayne who had made a day trip into Chicago to buy merchandise for a store one of them owns.  Neither had ridden a train before, both were enjoying the outing.  (Once upon a time, they would have had The Pennsylvania Railroad direct to Fort Wayne, and perhaps in the future they will have a corridor service linking Columbus with Chicago.)  They had opportunity for a sit-down meal, and the wait staff were properly attentive that there were passengers on a short schedule aboard.

But for how much longer?  The latest attempt by Amtrak to emulate the airlines might be the elimination of dining service on the Capitol (once home to the salad bowl and Deer Park spring water of Baltimore and Ohio) and Lake Shore (must we really mention the watermelon pickle of the old Twentieth Century?)  I'm not making this up.  Quoting Jim "Travel and Trains" Loomis, "I come across a press release from Amtrak announcing that there will be no more hot food for sleeping car passengers on the Capitol Limited and the Lake Shore limited.

"Instead, those of us riding in and paying top dollar for sleeping car accommodations will be able to order meals being prepared off site somewhere and delivered to our roomettes or bedrooms."

Did I mention the two women were riding coach?  If they have to schlep their own food aboard, they might as well be riding the bus.  Meanwhile, on the sleepers, will the food delivery be when the train passes a given location, no matter what time it is, and will it be tied to a train-order hoop the way the freight crews sometimes get fed?

The good news is, I didn't know this at the time I boarded, and perhaps buying a round of Pabsts satisfied the gods of the high iron.  South Bend 9.14 - 9.19; Elkhart 9.40 - 9.43; Waterloo 10.33 - 10.34 for the front end, 10.35 - 10.41 for the coaches.  Sack time, without the stress of sitting waiting for signals to clear.  Observe Toledo, Cleveland, and Pittsburgh without bothering to check times: that dark hour connection for Altoona, Harrisburg, and Philadelphia holds, but no through service linking Philadelphia, Pittsburgh, Cleveland, and Chicago annoys. 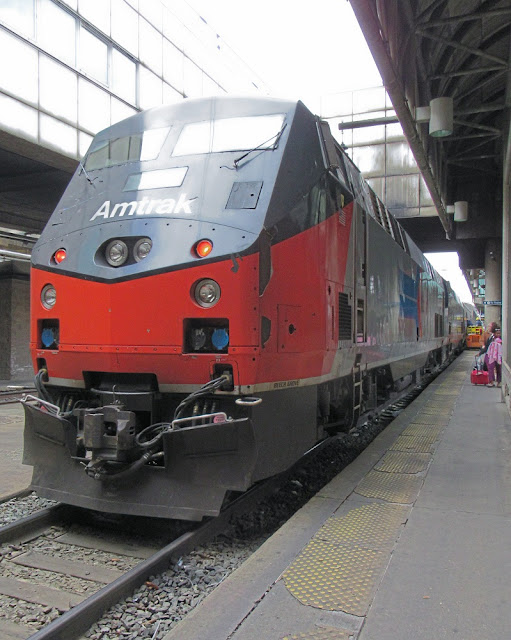 Upstairs, into the station, there's a massive queue awaiting the 2.0 departure of a regional train that originates in Newport News and must use the southern tracks.  That's the downside of the food court and retail space being placed in the concourse area of Union Station, where the train gates, baggage claim, baggage checking, and the Club Acela lounge also are.  The queue stretches almost the full extent of the concourse. 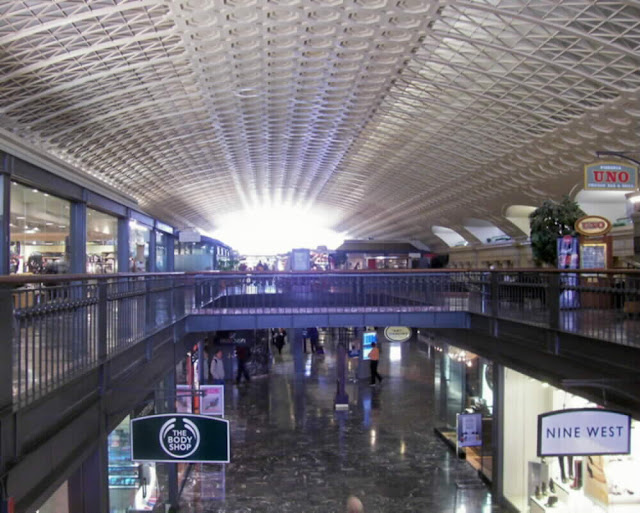 That view dates to a previous visit, on 20 October 2014.  The space at far right of the photo is for passenger services and the departure lounges.

The old waiting room area, by contrast, is a great empty space. 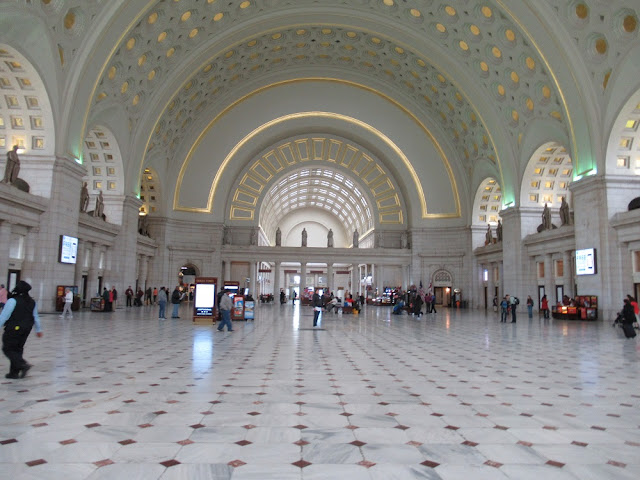 In Chicago, Amtrak cope with the large passenger loadings and cramped space by using the Great Hall as ... imagine this ... a waiting room with benches, and passengers are escorted to their trains directly from there.  But perhaps that is a good problem to have, more passengers waiting to get on a train than there is space for them to wait, and at least for the present, they don't have to report an hour early for screening and check-in and all the rest, and on those high platforms, there are plenty of doors through which to board.

I may have to make a habit of buying a round for travelling acquaintances.  But dog-gone it, Amtrak, stop messing with the food service and degrading the first class.
Posted by Stephen Karlson at 18:38