The big Passenger Rail surprise in 2018 is the opening of Florida's Brightline service, a real-estate development project making use of Florida East Coast rails, with hopes of offering service between the Orlando airport (and the studio-affiliated theme parks nearby?) and Miami.  Earlier this month, I had an opportunity to ride the promotional trains currently serving Fort Lauderdale and West Palm Beach.  When the service rolled out, a one-way ticket in standard or coach class, which is "Smart" service in Brightline's locution was $10, and the one-way ticket in business or first class, which Brightline calls "Select," was $15, including access to treats in the Select Lounge and a drink on the house enroute, and that proved so popular that a Select ticket is now $20 each way.

The trains run as four-car formations with a diesel at each end.  We'll see, once the trains start running to Miami and Orlando, if they add more cars. 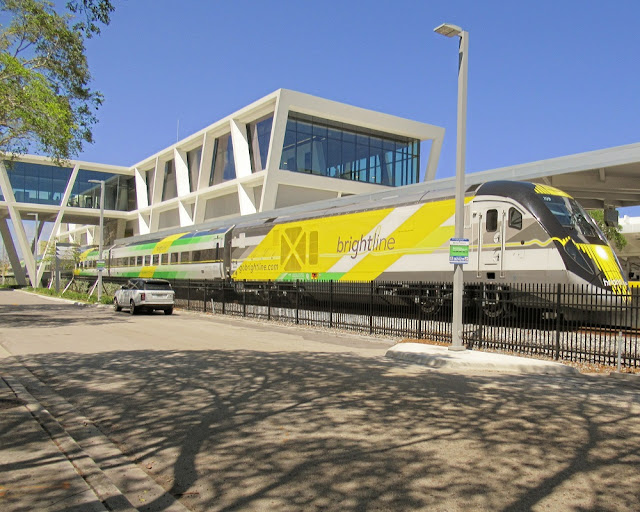 That's the Bright Green set at Fort Lauderdale.  (Sorry, I'm not yet ready to ram words together with an upper-case letter midships suggesting it's not yet a compound word!)

The station shows the influence of airport design. 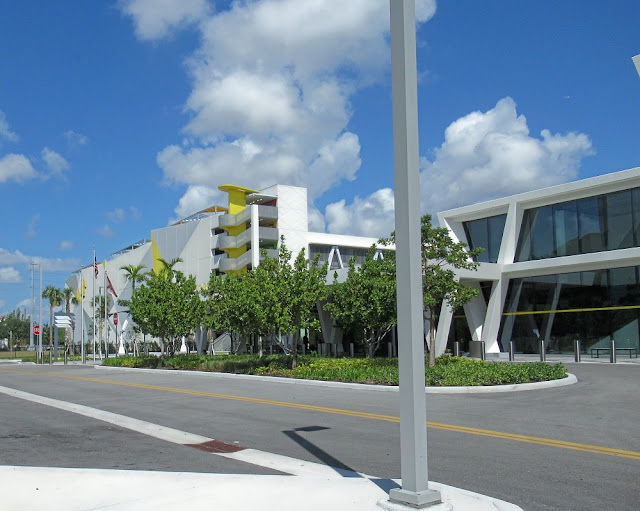 To the left, one of the Brightline real-estate projects, including a parking deck identified with the yellow trim.  The company is the official transportation partner of Miami's professional basketball team.  Perhaps by next season, fans will be able to park at a reduced rate in the deck and ride a train to a Heat game.  The driveway at the station door is in the same style as at any single-level airport: go inside and there is ticketing, baggage checking and baggage claim (there not being room for large parcels in the carriages), then security screening and upstairs (at Fort Lauderdale, there's a skywalk crossing the street) to the departure lounges. 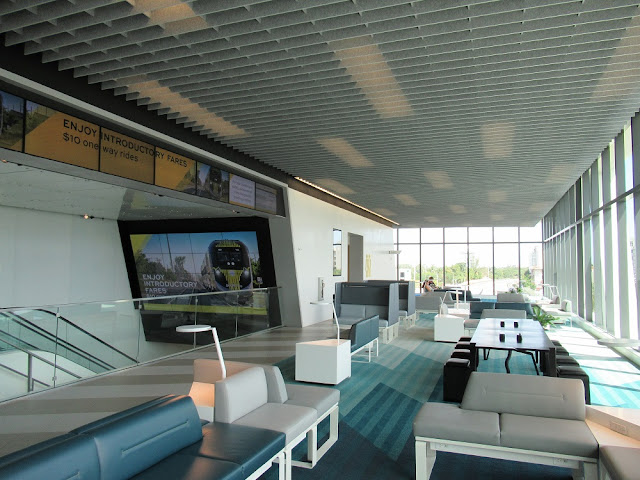 Smart Service passengers have the use of this lounge.  Escalators lead to trackside. 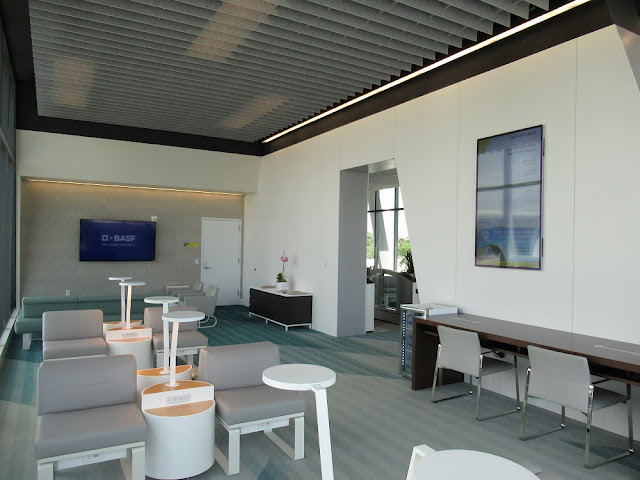 Passengers holding Select tickets have the opportunity, after scanning their tickets at a gate, to use this lounge, which includes treats set aside for consumption while they wait.

The Heat are not the only corporate partner: the station rest-rooms feature the latest Dyson plumbing, with the hand-dryers integral with the faucets.  Sorry, no pictures. 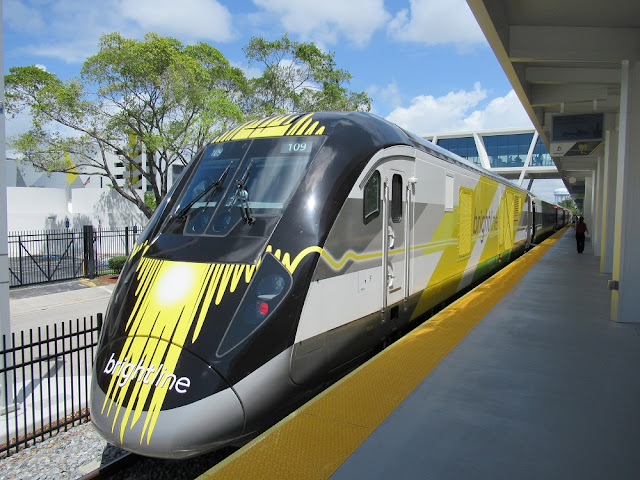 There are markers to help passengers locate their car. 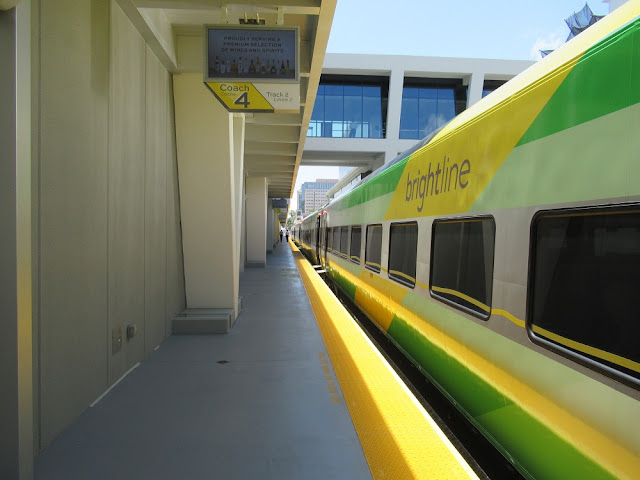 That's at the West Palm Beach station.  In the Select car, the aisles are wide enough to comply with current Americans with Disabilities standard. 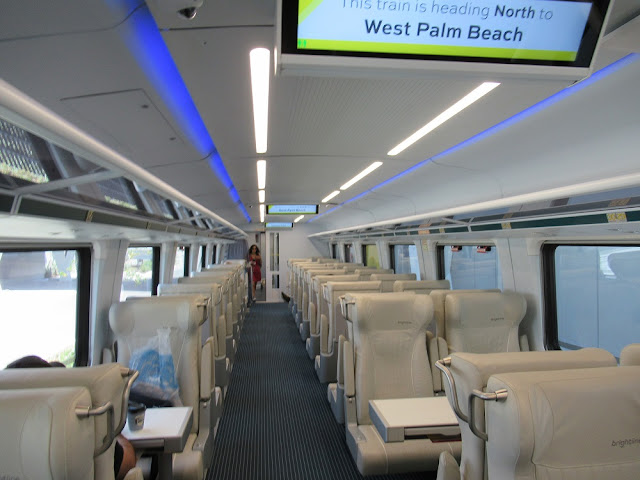 Some seats are grouped so as to face tables, other seats have fold-down trays. 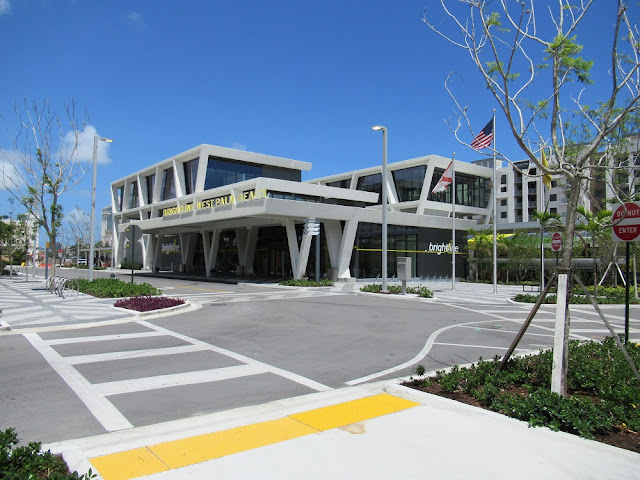 The station and street layout at West Palm Beach are different, although the airport influence is still evident. 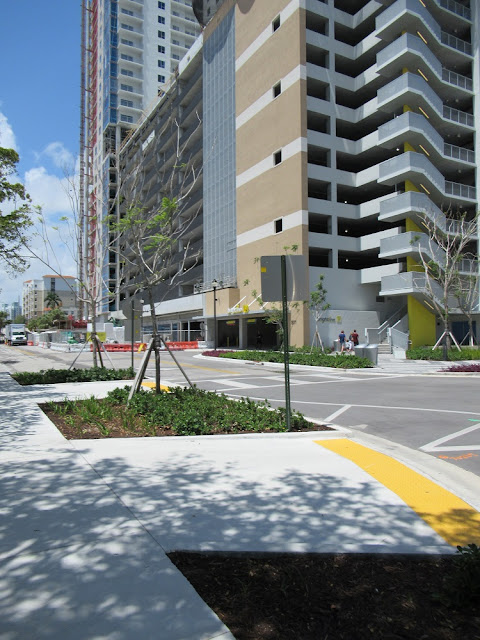 Here is the accompanying parking structure and real estate development, complete with Brightline joyriders returning to their car.  The station is close enough to the commercial center of West Palm Beach that I could have, profitably, given myself a longer layover and additional opportunities to explore, rather than grabbing some quick grub nearby and catching the next train out.

The day I was riding was a Saturday, and there were comfortably large loads of passengers, mostly out joyriding, a few noting they had never been on a train before.  It was a quiet time on the two-main-track Florida East Coast, and the passenger trains were simply shuttling, each occupying one main line, and meeting each other somewhere near Delray Beach or Deerfield Beach, where there was a street festival going on and a slow order in effect.  There don't appear to be any plans to add a stop at one of those beaches.

What, then, for the future of Brightline?  Although their Fort Lauderdale station description notes its proximity to the Fort Lauderdale city bus terminal, the easiest way for passengers to make an intermodal connection is closed. 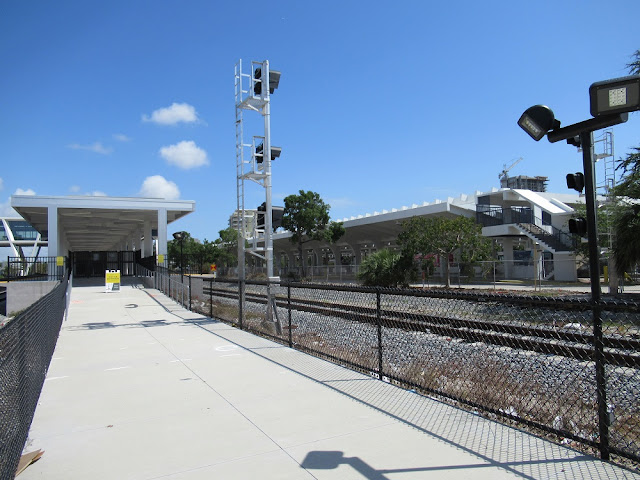 That's the bus terminal at right.  The fences are prudent given the propensity of people to take chances crossing railroad tracks.  The sign advises passengers to use the main passenger entrance, which, reminiscent of the old Central Station in Chicago, involves a walk, then going upstairs, then going downstairs again.

Although Brightline will run into a Miami station also served by Tri Rail (is this a different station from the Miami commuter train station with platforms too short for Amtrak?) and I saw a billboard along Interstate 95 and within view of Tri Rail passengers sitting on the east side of their trains advising Brightline nonstop to Fort Lauderdale, my sense is that the carrier views itself as catering to a different traffic base than either Amtrak or the Commuter Rail operators of southern Florida, perhaps a rolling gated community in the same way that the Acela service (which, note, offers only Business and Acela Custom seating, and provides a separate lounge with free treats, although no beer vendors) functions in the Official Region.  What that model does to the political economy of trains, which are either subversive of the established order because they democratize freedom of movement, or are a collectivist plot to make the masses easier to manage, I don't know.

The Brightline service is a startup venture, and it's not the usual Passenger Rail project.  We'll see how the expansions of service work out.  I wonder, though, if anyone in Florida East Coast or the real estate venture or promotions more generally is aware of the previous use of the "carefree, car-free travel" tagline.

There are enough Passenger Rail developments in south Florida to call for additional field research. 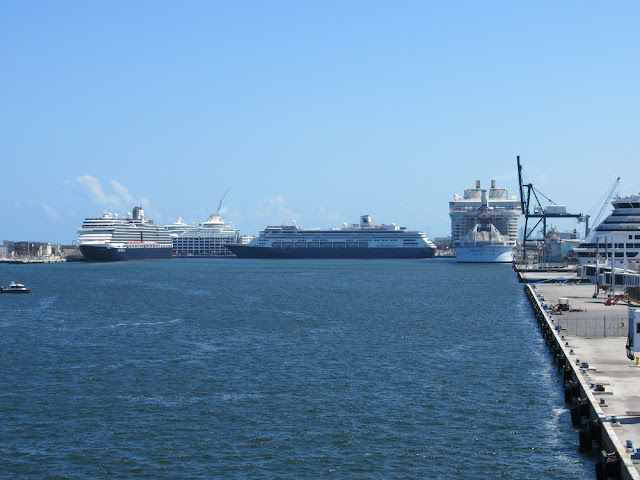 Not, though, on this trip!
Posted by Stephen Karlson at 14:23

Weren't there at one point regulatory restrictions on the ability of a RR to also be in a related real-estate business? If so, when did these do away?

According to the June 2018 Trains article on Brightline, the Miami-Orlando trainsets are planned to be seven-car trains - four coaches, two first-class coaches ("select", or would that be parlor car?), and a cafe car, plus the two locomotives on each end.

I'd like to see your thoughts when you have a chance to read that article as well. But first, enjoy your trip!

Fortress Investment Group manage the rail service and the real estate, while Grupo Mexico own Florida East Coast (go figure!) That's apparently enough separation for the real-estate developer to be a train operating company, as opposed to a railroad.

I got the Fortress tidbit from that Trains issue, which was in the mailbox on my return. That article is more about the infrastructure than it is about the business model.

As far as seven-car formations, that puts me in mind of the Great Western diesel trains, with a 43 Class power car at each end, four standard carriages ("smart"), a catering car with first class at one end ("select") and a dedicated first class carriage. Stay tuned.