TRAINING AMUSEMENT PARK ENTHUSIASTS. I had the opportunity to meet up with some kids at Six Flags in Gurnee. They very quickly figured out the art of rapidly reboarding an attraction with a short waiting line, here at a spinner called "Triple Play." They also used that tactic on two roller coasters! 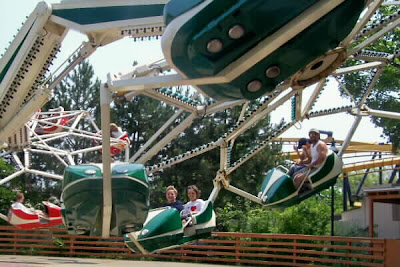 It was a busy day at the park, which offers a waterpark as part of the admission price (unlike a number of other themers, where the waterslides are priced separately). Apparently the big-city sewage systems are not working properly, and the natural wave pool called Lake Michigan is not everywhere fit for play.

As close as Six Flags is to Northern Illinois University, they probably could set up a proper steel band if someone asked. 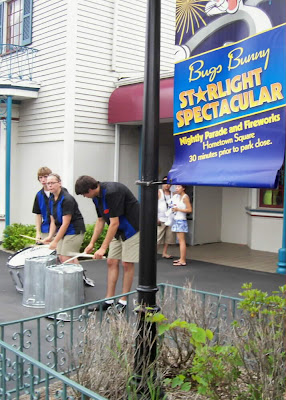 In its incarnation as Marriott's Great America, the park had a horsecar shuttle from one of the town squares to another. That service was discontinued by Six Flags, whether for health reasons or for poor productivity I don't know. The tracks are still occasionally used, here by the Looney Tunes Trolley. 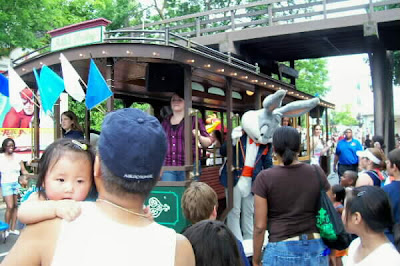 Whether the reprise of the Schuster's Christmas Parade still uses the tracks near closing time I don't know.
Posted by Stephen Karlson at 18:15