DEVELOPING A CORRIDOR. Princeton, Illinois, is a scheduled stop for both of the Chicago-Quincy train pairs as well as for the Southwest Chief (which, when it's close to time offers a midday option to Chicago as well as an early evening departure.) Friday evening, a late-running eastbound California Zephyr stopped briefly. 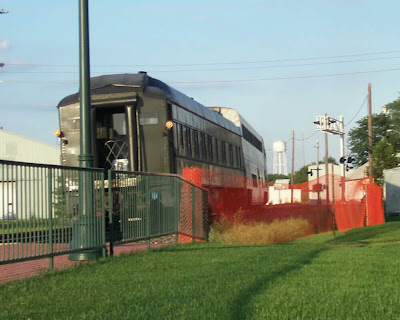 On the markers, the last operating heavyweight Pullman in the U.S., Dover Harbor, configured as six double bedrooms and a buffet lounge.

Both of the evening corridor trains were a bit off the advertised. The eastbound turned up first, two or three minutes after its 7.48 departure. While it was taking up about ten and setting down four or five, the westbound, due at 7.40, showed up. 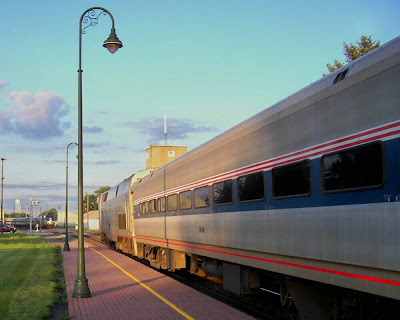 The railroad is reverse-signalled. As far as I know First Great Western have not taken over the Illinois franchise. The station attendant did direct passengers to the correct tracks for these trains. No attendant was on hand earlier in the afternoon for the Chief. Boarding passengers picked the traditional westbound platform only to have Three show up on the south main. The conductor noticed, and respotted the train at the crosswalk. Everybody appeared to take the situation in stride.

Princeton made the effort to present some dreaming spires in order to set the mood for the release of the latest Harry Potter story. 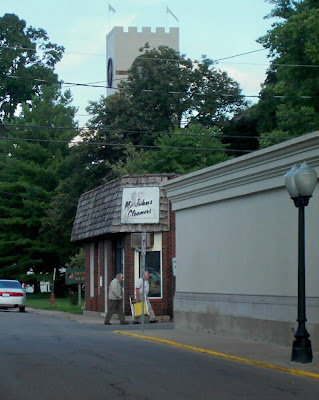 I discovered this event two years ago, when I'd headed to Princeton for Beef and Ag Night (nothing quite like a cookout, and sometimes somebody else oughta do the cooking) and stumbled into Wizard's Alley. The city offered the same agriculture and magic lineup this past weekend. 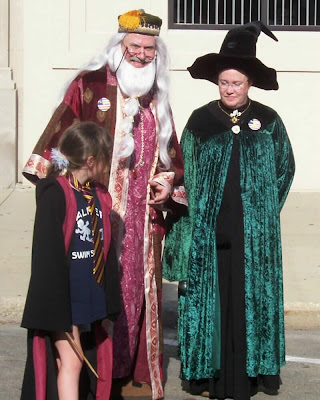 Next up: the Civil War re-enactment (which is quite well done) on October 13-14.
Posted by Stephen Karlson at 22:19