THEY THWARTED HITLER. I recommend that visitors to European cities attend a service in order to observe a cathedral doing what it is supposed to do. In the Church of England, the Evensong is usually a relatively short and less sectarian service than the Sunday Worship.

Sometimes, however, one lucks into an Evensong with an extra purpose. 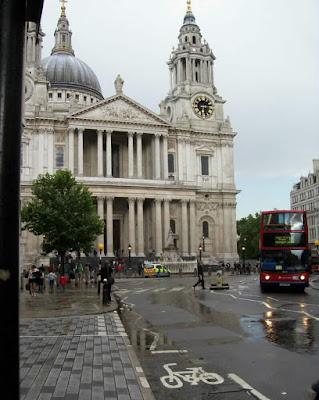 Such was the case Monday evening at St. Paul's, where the service was the annual Festival of the Friends of St. Pauls. The organization dates to the Blitz. Cathedral congregants stood watch on the roof and the grounds, prepared to extinguish any incendiary bombs the Hun sent their way. That work well might have made possible the famous photograph of the Cathedral surrounded by smoke from neighboring buildings that had been blitzed. Among the distinguished visitors at the Festival were the Lord Mayor of London and the Duchess of Gloucester. The order of worship included readings focusing on the Jerusalem Temple. Canon Edmund Newell's sermon made mention of Temples, Tithes, And Taxes: The Temple And the Economic Life of Ancient Israel, which might make for some instructive reading. I forgive the canon his trespass when he referred to economics as "a psychosis." (In context, it's not a grave trespass in any event.)

The St. Paul's visit came at the end of a two week sojourn in England, most of which was devoted to an academic conference in Oxford. More about that, and some incidental and not so incidental train riding, once the jet lag is behind me.

Posted by Stephen Karlson at 21:58