CORDELL-SAN WILL WANT TO KNOW. I picked up Railroad: Identity, Design and Culture. There's enough material in the book to make it a candidate for some future book review. This picture deserves commentary. There is a 1976 series Japanese bullet train car in preservation at Britain's National Railway Museum in York. 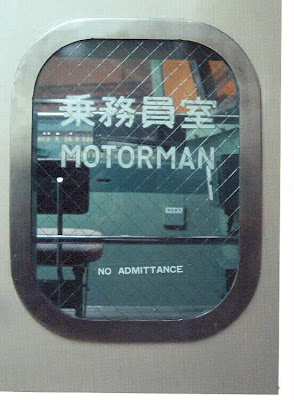 The picture, from page 61, quaintly refers to the "driver's cab." The language is vintage American interurban.

Local ferroequinologists like to speak of the Electroliner as the basis for the bullet trains (a 1951 speed test might have attained the top ten for speed records with electric traction at the time) and it's possible that the Japanese engineers who examined the North Shore Line and the Electroliners took very careful note of the train's appliances and signage.
Posted by Stephen Karlson at 19:58