UNDOING PAST VANDALISM. The January issue of Railway brings news of a planned upgrade of London's Euston Station, including additional tracks and revised passenger flow patterns. 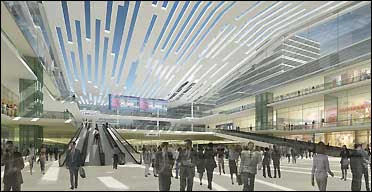 Image from Guardian Newspapers.
The redevelopment has been public knowledge since March 2007.

Network Rail said the cramped and dingy surroundings would be transformed into a light and airy thoroughfare for the 55 million passengers who use the station each year.

The unloved entrance to the station will also undergo a transformation, though it is unlikely the deal will involved resurrecting the Victorian arch that was bulldozed in the 1960s to make way for the current building.

British Land, which was selected as a preferred bidder, said the passenger improvements would be funded by unlocking the commercial development of the site.

Imagine. A railroad station in the basement of a skyscraper. 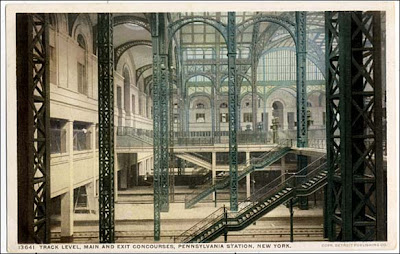 Pennsylvania Station, New York.
The North Jersey Coast train leaves at a quarter to four. Look closely for the sign reading DOWN STAIRS FOR INCOMING TRAINS. Pennsylvania Station and Euston Station both went for 1960s redevelopments that have not aged well at all. Economic uncertainties appear to have put on hold the planned rebuilding (keep scrolling, it's down there) of Penn Station including passenger facilities in the Post Office.
Posted by Stephen Karlson at 22:50