DIALING BACK THE CONDESCENSION WILL HELP.

Democrat strategists would like to win back some of those voters: that Our President is alienating conventional ethnics by flouting bourgeois convention helps, but they're still engaging in soul-searching.  Perhaps not enough soul-searching, notes Mahablog.


Part of the problem with Democrats is that they believe they campaign on issues when they really don’t.  This was my gripe with Hillary Clinton’s campaign. She did not campaign on issues. Clinton supporters disagree with that and complain up and down that she did too; she had a whole website full of policy proposals. Yeah, and the only way to find out about them was to go to her website. By watching her television ads and seeing her on the teevee news, you wouldn’t have had a clue what she was running on other than her resume.

No, she thought she was running on issues. "Civil rights are womens' rights are Elgeebeetee rights are human rights" at full screech, just before the "Thank You!" But I digress.

The Mahablog  post riffs off Andrew Levinson suggesting that "The debate over moderate versus progressive policies is irrelevant unless Democratic candidates can first establish a basic level of trust with these voters."  It's not so much about Hillary's condescension or Bernie Sanders's economic cluelessness.  " Donald Trump, vile and dishonest as he may be, very successfully tapped into a deep mental and emotional perspective in white working-class life—a distinct kind of modern class consciousness, class resentment, and class antagonism that is almost entirely unacknowledged in current discussions regarding how to reach these voters, but which plays a critical role in their political thinking." The antagonism Mr Levinson identifies concentrates on three types of (primarily coastal) people: the political class, Wall Street financial managers, and the Academic - Entertainment - Media agenda-setting class.  Successful Democrats, outside the coasts, might do well to lose the hipster poses.  "Many went hunting on fall weekends, listened to country music in their car, and were able to talk with firsthand knowledge and personal experience about the day-to-day problems of the white working-class people in the neighborhoods and communities they represented. In their personal lives they refuted the accusation that they were educated elitists with no connection to or understanding of ordinary peoples’ lives."

I suspect he's on to something.  Too much of the political or financial or cultural aesthetic comes bundled with hybrid cars and bike lanes and five dollar cups of coffee and eight dollar artisanal stale pale ale, better understood as headache in a glass.  And Normals get it.

New Orleans Times-Picayune columnist Tim Morris has not yet read The Washington Monthly, and he sees it.


Democrats were once known as the party of rural families, union members and the white working class. It is now associated with the coastal elites, nouveau socialists, the "resistance" and all manner of identity politics.

The point is that Democrats have turned their backs on the voters who once lifted them to consistent congressional majorities and occasionally into the White House. They may win in dozens of districts scattered across the country in the fall, it may even be a "blue wave" election. But they still haven't come to terms with the fact that thousands of their former supporters believe that a wealthy, former reality TV star, casino mogul and New York real estate developer understands America's working class better than Democrats.

It might not do much good to turn out a lot of those emerging ethnic votes in the big cities.


[C]onservative white Americans look at urban multicultural liberalism and notice an important fact: Its white elite remains, and continues to enjoy staggering amounts of power and privilege. So when that same white elite applauds the decline of “white America,” what conservatives often hear isn’t a cheer for racial justice but another salvo in our ongoing cultural grudge match, with the victors seeking to elevate black and brown voices while remaining on top themselves.


You could assemble stories like these pretty much any day of the week. But when I read them together, I thought they were a stark example of how malignant America’s self-appointed “elites” are, even though, as we never tire of pointing out, they are anything but elite. In fact, they are below average. Which is why most Americans rightly don’t think much of them.

It doesn't help when a recent New Yorker cover doubles down on the condescension. 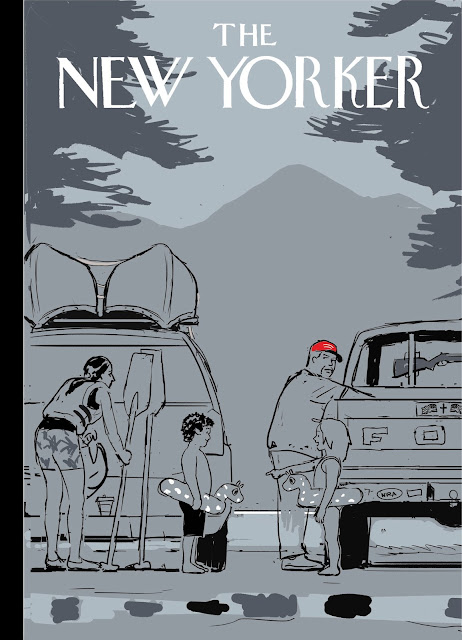 The final version is more of the same.  But it's important, because The Narrative.


The timing seemed right for a new spin on a classic illustrator’s theme, the family summer getaway. A few summers ago, I passed through a small town in Montana to buy some emergency bear spray for a week of backpacking in grizzly country. Soon after, that same town made headlines as a hotbed of white nationalism. Instantly, the grizzlies seemed like the lesser threat. For the record, I support a hunter’s right to humanely harvest wild food as much as I support a father’s right to wear dorky hats with sandals.

The timing seemed right for a new spin on a classic intellectual weenie fear, the backwoods outdoorsman.  Short version, intellectual weenie's car breaks down in the woods and a guy wearing an "NRA Freedom" gimme cap fixes it and she decides to throw a gratuitous dig at him in the course of a book review.

That's what gives Kurt Schlichter's summer columns, many of which appear to be an opportunity to peddle an upcoming book, their punch.


Of course, the elite does not want an honest and open conversation about the basic premises it operates under, whether in terms of foreign or domestic policy. It understands that its policies are indefensible. They are indefensible because they are manifestly designed not for the benefit of Normal Americans – whose interests every US government policy should seek to serve first – but for the benefit of that same elite.

That New Yorker cover will do nothing to convince the Colonel to dial it back.
Posted by Stephen Karlson at 15:06

One huge problem the Dems have in coalition-building: for much of their base, political affiliation is more about *the assertion of claimed status* than it is about policies. And status, in this sense, requires having people to look down on.