The housing crash and the population exodus from Illinois have not been good for DeKalb, or for the local businesses, or the local university.

Just before the crash, the operators of Devonaire Farms were selling three or four variants of the same Executive Box and the thinking in those days, before one of the periodic cycles of high gas price, was that a long commute from Rochelle or DeKalb was manageable as long as the Executive Box was cheap enough. 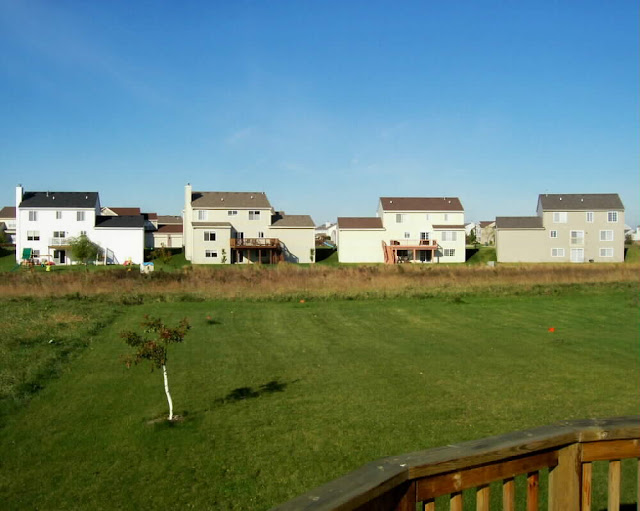 Cold Spring Shops headquarters got planted here when the housing market got soft enough that a builder was willing to indulge my ideas for a train room concealed under a ranch house.  Flags mark the location of tree seedlings in the summer of 2009.  The pin oak lasted.  I bought some other trees for the other spots.

The years after the crash were not so good for Devonaire, and the vacant houses with decorative plywood ornamental elements didn't handle the sun and the temperature variations too well.  But somebody was willing to buy up the distressed properties, and perhaps that investment will pay off.  "The housing starts in DeKalb are the big development for homebuilding in the county, while communities such as Sycamore and Genoa have continued to see homebuilding in line with current – and gradual – trends." For some reason, there has been a lot of construction in Hampshire, which is just across the county line (and in the Metra commuter rail tax district, if not currently on a commuter train line?)

There's enough in the practitioners' discussion of possible reasons for the building in DeKalb to keep all sorts of researchers and pundits and policy advocates busy.


Ten years later, it seems local developer John Pappas is convinced the tide is turning. He and Park Ridge businessman Peter Iatredes walked away as dozens of undeveloped lots in foreclosure they owned in the Bridges of Rivermist subdivision went to auction in December 2014.

“There’s zero growth in DeKalb,” Pappas said at the time, “and there’s nothing I can do about it.”

“This is only the beginning for the growth,” said Pappas, who’s lived in DeKalb 47 years. “There are a lot more things to come.”

“I’m a very positive person in general, and I think [Northern Illinois University] is going to turn around soon,” he said. “We’ve got great new management, and this is a great college town. This is a great time to invest in DeKalb.”

A decision made in July 2017 by the DeKalb City Council to eliminate impact fees for new building permits in several of the city’s subdivisions helped, as well.

Community Development Director Jo Ellen Charlton said getting all three entities – the city, DeKalb School District 428 and the Kishwaukee Water Reclamation District – to commit to waiving the fees was a long time in the making.

The point of those fees is to finance at least the initial tranche of water and sewer mains and streets and lighting and such, and waiving those fees lays those burdens off on all taxpayers, and the anticipation of future in-migration or a return of twenty-five-thousand students to Northern Illinois University might be suburban growth Ponzi scheme thinking.

It's been a good ten years, though, for the trees people planted. 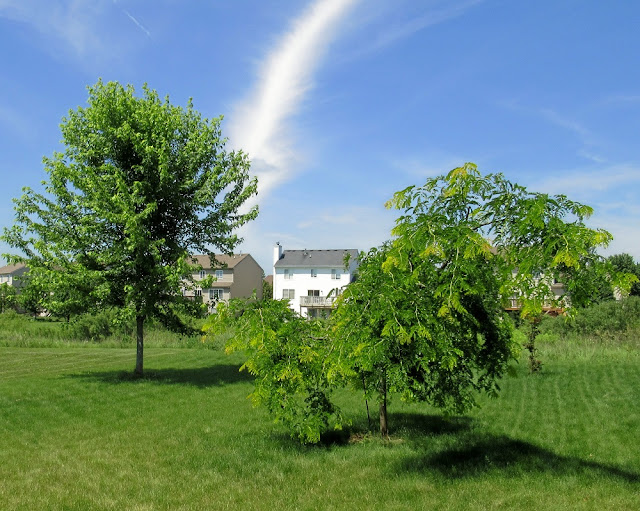 The view as of 24 June, 2018.  The maple tree is about the same spot as the left-most red flag in the upper picture.  The sunburst locust is in the spot marked by the red flag in the center of the picture, and it has recovered pretty well from last summer's windstorm.  Yes, there's still a vacant lot to the north of the beige house at right, which now sports a deck.
Posted by Stephen Karlson at 11:08