SOMEBODY TELL HER TO CHECK HER PRIVILEGE.

Inside Higher Ed guest columnist Rachel Harris gives people who don't like higher education very much reinforcement of their prior beliefs.


As colleges and universities work to increase diversity in hiring and course offerings, they don’t always realize that the small, welcoming communities they believe make up local town life are unsuited to or lack amenities for the faculty members whom they are hiring. Whether Jewish, Muslim, Hindu, Baha’i, black, brown, LGBTQ or otherwise, faculty members may not find a place of worship or a community of significant size in a small college town two hours from a larger city. They may face racism and prejudice. Even with the internet, being single with dating options many hours away can prove debilitating and depressing.

Further, faculty members with highly educated and qualified spouses are unlikely to find work in their chosen profession if they aren’t part of the university or medical institutions that dominate the professional landscape. Institutions in remote locations often try to hire spouses and partners, but the people who aren’t academics or who depend upon a large urban space for their professional life could find the town to be a job desert. And the spouse or partner who has a job that includes a significant amount of travel may have another set of challenges when the nearest major airport is hours away.

A bull session of prodigious length and the heat only academics can generate cavilling over trivialities is in progress. It starts with this gem.


If you voluntarily choose to live hours from campus, you should not get special scheduling favors and additional money that are not available to faculty members who choose to live nearby. And if you want to talk about stereotyping, it's pretty offensive to imply that white, christian [c.q.] males are not interested in being at home for their families.

When someone chooses to commute to campus from far away, it typically imposes additional burdens on that individual's colleagues.We have a colleague who is a commuter. Every semester, the person insists that they only have to be on campus Tues afternoon-Wed-Thurs morning. The result is that the entire departmental schedule has to be built around this person's course requirements. And the person refuses most service assignments since they are rarely on campus, which means that other department members see their service burdens increase.

I posted a similar gripe about faculty splitting the commuting distance between DeKalb and Chicago years ago.  "The 15 minute bicycle riders maintain home offices for a reason; longer commutes -- or daycare schedules -- ought not be trump cards for scheduling meetings."

For that matter, why should academicians be any different from any other sort of employee?  Yes, having a tenure-line appointment at a highly-regarded university with abundant access to like-minded singles or upscale amenities is a good thing.  In like manner, screening for Union Pacific's Steam Team and pulling the throttle on a Big Boy before cheering crowds is a good thing.  But without the alfalfa harvest in the sandhills, there's no Union Pacific with the discretionary income to run Big Boy.

Somebody has to move the harvest off the high plains, such as at Lexington, Nebraska. 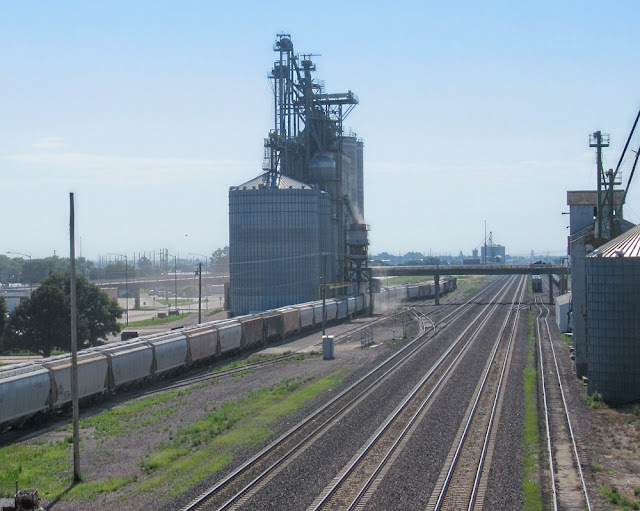 These days, those three main tracks might have six or ten or a dozen intermodal trains, coal or hopper trains, or full trains of loose cars bound for Elkhart or Kansas City rolling by while that land barge continues to load.  (My luck to be at Lexington just when there were no trains around.)

Once the alfalfa season is over, perhaps the crews get laid off with the opportunity to bid on jobs elsewhere on the system.  After alfalfa season comes deer season, perhaps there are opportunities to move timber out of Hinkle, Oregon.  Bad luck, that yard was just closed and all the yard crews (a yard job has predictable hours, and you're home after each shift) are signing up for the available road jobs.  Maybe Houston has openings, along the Chemical Coast.

I wonder how successful this appeal would work, if directed at the railroad.  "We shouldn’t expect weekends to belong to the job for locals or commuters."  On the railroad, having enough seniority to be able to mark off at Christmas or Thanksgiving might be a bigger reward than screening for the Steam Team.

How many times do I have to advise supposedly intelligent (well, credentialed, anyway) people not to be so stupid about being smart?
Posted by Stephen Karlson at 23:02