UNDERMINE THEM WITH MOCKERY.

What happens when the Deplorables refuse to be deplorable-shamed?  Here's Peter Wood again, turning the overuse of a term against itself.


I am taking this latest attack on Amy Wax as the occasion to begin my own campaign to discredit the Left’s all-purpose use of racism. It is the lazy social justice warrior’s opprobrium of choice, and typically it means nothing at all as a label on the recipient. Mostly it means that the person who attempts to pin it on someone else has contempt for the ability of other people to sort things out. It is the vocabulary of the incipient lynch mob.

Well, yes, the Angry Left has long depended on bourgeois respectability to get away with that sort of shaming. Trot out one of the phony isms and phobias, and in the past, the decent person would apologize for giving offense or something, and the more substantive discussion of what the Angry Leftist is peddling is lost.  Better, when somebody swings a rhetorical sucker-punch, to punch right back.

And get a fight is what you get.  Laura Hollis explains.


People may not love being called out for things they have actually done. But they resent like hell being accused of things they haven't done, especially when they're simultaneously told that there's nothing they can do to remove the stain, or that they cannot take credit for their own achievements.

That's the error of privilege-shaming, and in politics, does anyone seriously expect to win votes by suggesting voting the other way is deplorable?

The good news is that the people who think deplorable shaming works as a trump card have to respect it when their allies use it.  That puts Synova's earnest woke girl in a bad spot. 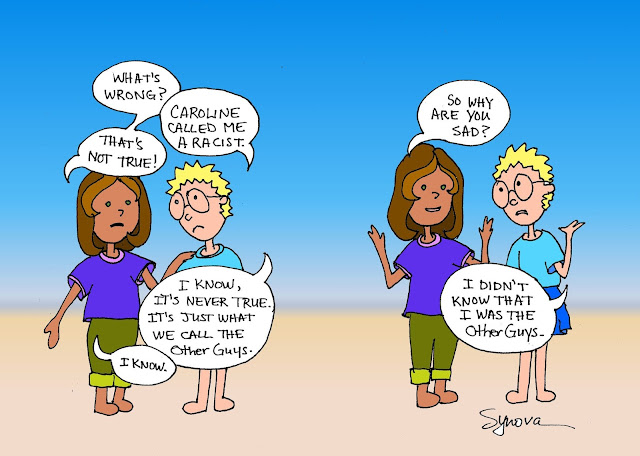 Struggle sessions are like that.  "There was a couple of items in the news lately where someone who was a zealous woke warrior ended up on the wrong side of accusations which required apologies and even a demotion for something which the fellow (I did look, several times) never actually said."

The cartoonist is an acquaintance of Sarah Hoyt, and these sometimes get wider play when she has the keys to Insta Pundit, overnight.
Posted by Stephen Karlson at 14:46