GETTING TO THE HEART OF THE MATTER.

We'll close out the first year of not-regular Saturday bridge columns with a fun hand that could have paid off even better. 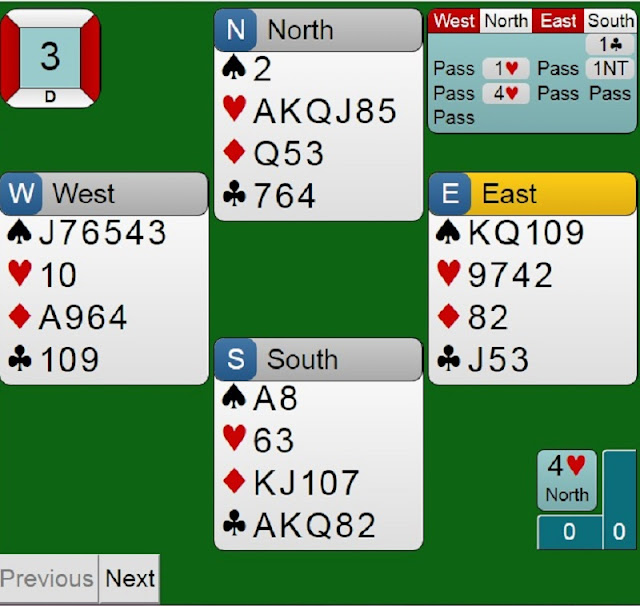 I could have raised "Two Diamonds" to that "One Heart" response, and perhaps that would have been wiser, even with a flattish hand and partner likely having a suitable stopper in Hearts.  The partner bot immediately bids game.  Note there is no box around that bid, indicating one of the special bids that get Cliff Notes treatment from the simulation.  Thus I decide not to push higher: there might be some convention to get there.

On to the play: the South hand is open, and East leads the ♣3.  Take stock in the North hand, the closed hand for this diagram: no losers in Spades; the Hearts should all be good; one Diamond must fall to the outstanding Ace, and the dummy takes care of the Clubs.  Here's how it goes: win the first trick with the ♣ Queen on the board; cash the ♠ Ace to safeguard against any annoying Spade leads from the defense; four rounds of Hearts draw all the trumps; now go to work on the Clubs, when I saw the Jack, Ten, and Nine come out, that Eight would have been good, but I ruffed with the ♥5 that was still in reserve to be able to lead a little Diamond toward the King; that finesse didn't work, but now West is almost in an end-play situation (the bridge version of Zugzwang I alluded to previously) having to lead toward the commanding Diamonds and the ♥8 also in reserve: the best hope, to lead a high Spade, trumped in the closed hand, then two rounds of Diamonds for plus two.
Posted by Stephen Karlson at 17:26

Off-topic, but maybe something you can shed some light on...How does GDP get allocated across geographies?...For example, if there are some oil wells in a sparsely-populated part of Texas, requiring very few employees but generating a lot of $$$, then where does their contribution to the GDP get recorded?...the place where the wells are, or the place whether the company that owns them is headquartered or incorporated? I *think* it's the former, but it looks like it would require some serious digging to get a definitive answer. And, of course, the media is totally incurious about what really lies behind the numbers that they cite.

To do that properly requires the disaggregation of the National Income and Product Accounts at the establishment level, which is to say, it's too costly to do for each well or each field. The published data are part estimate and part aggregate, and then there's the transfer pricing challenge, as some of the wells are vertically integrated.

The calculation, assuming you can observe the transaction, is straightforward. Well sells oil, that's the value of its shipments. Well has payroll, some supply expenses, and what have you, that's cost of materials. If you're really lucky, you have a handle on capital consumption allowances and maintenance. Then, the value added by that well is its value of shipments less the costs of materials, and the capital consumption, VA = VS - CM - CCA.

Those shipments become part of the CM to the refinery, wherever it is. Do it right, and value of shipments to final consumers becomes regional product. (I'd have to dig into some old notes, if I even have them any more, to provide a more precise explanation.)

Thanks. To calculate that, the agency doing the calculating would have to have cost and sales data at the establishment level, with transfer pricing info where applicable...I don't think there is any requirement for companies to supply such data, they must be sampling it somehow IF they are even trying to allocate GDP regionally.

I have see claims by liberals and Progs that most of the GDP is generated in Blue states, which raises the question of what "generated" really means...I suspect that whatever methodology is being used is skewing the results toward HQ locations rather than field locations.

There are also field sales organizations that are broadly dispersed: you could do a value added calculation for them by assigning the product to them at transfer price and then crediting them with all the sales revenue they generate...in principal.

The core of all this is something called "value added". Divvy up production into stages, measure the value going in and the value coming out, and you have value added.

I have no illusions that most of the value added takes place and/or is correctly assigned to states that are currently blue.

I would be much more concerned about the bait and switch going on: Democrats says they are not about the money, but they certainly seem to be flocking around it for the last few decades. Even more so, cementing the wheels of power in those places so they are more blue. The big question then is whether they are nurturing the gooses laying golden eggs, or slowly bleeding them to death.

Gosh, if anybody comes in here hoping to find some insight on whether asking for aces with Four No Trump or just hoping for the best and bidding Six Hearts is the better thing to do with seventeen high card points and no support for Hearts.

As far as the disaggregation of value added by states, on the one hand agglomeration economies are real, and the big cities have long been places where Marshallian entrepreneurial churn can produce a lot of value added.

In addition, because value added comprises wages, interest, rent, and profit, a thickly settled area will simply generate more value added simply by being home to a lot of wage workers.

Thus, not surprisingly, California, Texas, New York, Florida, and Illinois lead the league tables for state gross domestic product (I didn't dive into the reports far enough to see if this comes from estimated value added or reported payrolls and interest payments); the rankings are somewhat different on a per-capita basis, with the top honors going to New York, Massachusetts, Alaska, North Dakota, and California.

As far as the Democrats' policies bleeding the prosperous states, the Bureau of Economic Analysis state growth reports are inconclusive. If Illinois is the canary in the coal mine, though, the future is not so great for the states run by Democrats, the tax returns from legal marijuana not-withstanding.