THEY ROLLED OUT OF COLD SPRING SHOPS. A street resurfacing project in Waukesha (which, if that village's past history is any indication, will lead to yet another reversal of direction of one-way streets in village center) includes the unearthing and removal of rails from the long-lost interurban. 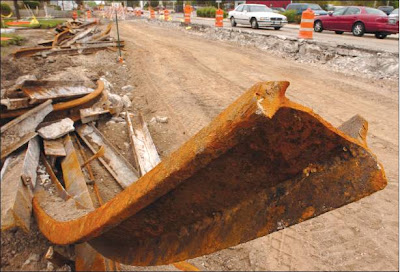 Waukesha Freeman photo by Kevin Harnack
Spring City Chronicle, who unearthed the images, uses the occasion to take a dig at the latest light rail projects in Greater Milwaukee.


Examples of the light rail line which once linked southeastern Wisconsin communities and went out of business because it lost huge sums of money and no one rode it are in the blog’s header and decorating this post.

I replicate the poster's use of bold italics, where either alone would suffice.
Snarking aside, the reasons for the failure of the interurban include the forced divestiture of Railway from Light under the Public Utility Holding Company Act and the use of tax money to build rights-of-way for competing bus lines and private vehicles that now creep along the roads that parallel the Rapid Transit Line's path. Some errors by the management of The Milwaukee Rapid Transit and Speedrail Company, which operated the curved-side cars as illustrated below, contributed to the demise of the line. The late Frank Zeidler was unable to obtain legislative support for a transit authority to continue its operation. 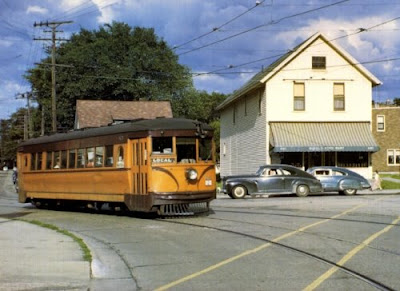 Unattributed photo of Speedrail car 63 in Waukesha from Spring City Chronicle
Before Speedrail, and before divestiture, the combined power and transit company operated these rather substantial cars. One history of the Rapid Transit line suggested that it would have been more successful had it been operated in the manner of a modern light rail line, with lighter, faster-accelerating cars. Those, however, had not yet been developed at the time the interurban company was upgrading the route to Waukesha.

Unattributed vintage photograph from Waukesha Freeman.
The interurban at one time had plans to move the cars out of the streets of Waukesha, in keeping with contemporary suburban light rail practice. A friend who worked for the regional planning commission discovered, in a survey of potential rail corridors, that one of the Wisconsin Electric transmission line rights of way uses land owned to this day by the power company, rather than the more conventional eminent-domain easement more commonly used by power companies. That right of way is exactly where one might want to run a railroad near the center of Waukesha without using the streets.
Posted by Stephen Karlson at 23:47