SOME LIGHTS STILL APPEAR TO BE ON. A few minutes ago I downloaded from Earth View a satellite view of the Gulf of Mexico taken at 0317 Zulu on September 1. 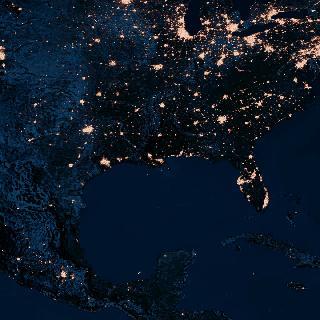 I welcome recommendations of other sites with satellite views showing the lights, or lack thereof, on the Gulf Coast.

The weather update for Northern Illinois University provided links to before and after views of the Gulf Coast. Lake Pontchartrain is much more full of water after the storm than before the storm; as news reports are indicating the water levels are equal on the lake side and on the city side, the challenge to closing the levees will be in dealing with the general return of the lake level to mean sea level. To the east, there is a temporary Firth of Tombigbee that will also drain, but not before revealing a mess between the riverbank and the high water mark.

A nearby talk radio host was this morning soliciting comments about the wisdom of rebuilding New Orleans in place, some feet below sea level in a swamp. After the cleanup, the recriminations promise to be nasty.
Posted by Stephen Karlson at 22:31