A HOUSE DIVIDED.  The main point of last month's eastern adventure was to attend a reenactment of the Battle of Gettysburg that coincided with the dates of the actual battle, seven score and eight years ago.  A number of the participants I spoke with suggested I return in two years.  With the sesquicentennial of the Southern Rebellion underway, and with the tight economy, a number of the reenactors  opted to pass on Gettysburg in order to participate in the upcoming commemoration of First Bull Run, or as some of the participants would have it, First Manassas, which will commence on July 21.  It's more likely, time and resources permitting, that I will follow the trail of my great-granduncles in the 31st and 34th Wisconsin, meaning Raymond or Vicksburg in 2013, that is, if Mississippi will be hosting such commemorations.

But in a larger sense, the participants and the spectators represent a great task remaining before us. 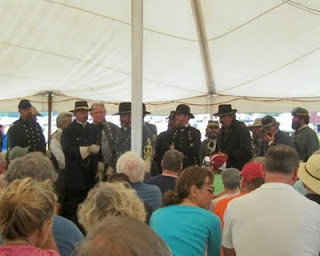 It's a reenactment, and everybody knows the outcome.  Thus Matthew Brady (white shirt, brown vest, at left) and Winfield Scott Hancock (with microphone) and Governor Extra Billy Smith and William Tecumseh Sherman (to right of tent pole) and John Buford (in cape and flat Hat) and Stonewall Jackson can all mingle amicably at the close of a presentation, which took the format of a press conference with Genl Lee and his staff. 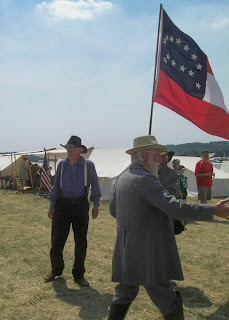 You can see a lot just by watching the spectators. 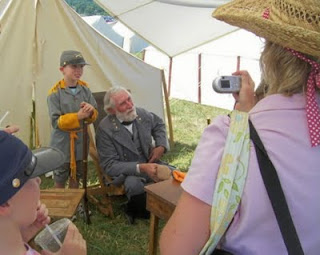 Genl Lee poses with a young admirer.  Just like the real Civil War, he has a brother (at left) on the other side. 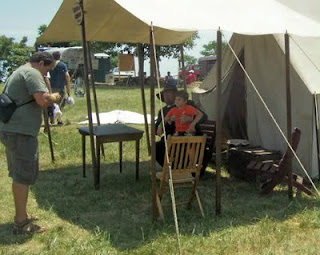 Genl Grant, who took a few day's leave from investing Vicksburg, here entertains a somewhat reluctant visitor.  (Give all the performers props: their full measure of devotion consisted of staying in uniform, drinking only water or lemonade, and in many cases tenting on the old campground in the middle of a thunderstorm.  Some people were taken to hospital after a lightning strike, and released as uninjured.)

Look around the audience and you see lots of families with late elementary or middle school aged kids.  Probably a higher median age of the kids than you'd see at Disneyland, but a lower median age than at some of the more intense theme parks.  Disneyland draws a somewhat more affluent crowd, and more diverse.  Most of the spectators looked white, and, by observation or by eavesdropping on conversations, a Gettysburg reenactment draws military families at a rate that exceeds their presence at Disneyland or in the general population.   Middle-income, white, military ... once upon a time, that was mainstream American  ... what that demographic now is remains to be seen.

Now we are engaged in a great cultural war, and this reenactment might be a great battlefield of that war.  Within the audience, I conversed with more than a few schoolteachers, who wanted to make sure their children learned something about this war and this era, something that has been scrubbed from far too many curricula (whether to make space for more high-stakes tests or for celebrating the accomplishments of left-handed red-haired transvestites is a skirmish for another day) and more than a few of the presenters noted to their audiences, in forms ranging from an aside to a plea, that U.S. history does not begin in 1876, or whenever the regnant content standard now puts it.

The danger, however, is that history as interpreted by actors and hobbyists might perpetuate misinformation, or error.  I learned new things about the eastern war at this event; however my war (Cairo to Columbus to Vicksburg to Murfreesboro or to Savannah) might not have happened as far as many of the performers and spectators were concerned. 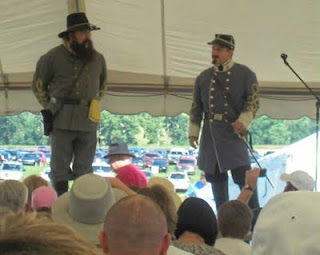 Here, Genl Longstreet tells how he had come to be a corps commander at Gettysburg, including reference to his proposals for the 1863 fighting, in which he proposed to detach a corps or two from Virginia, proceed to Chattanooga, defeat the Federal forces there, then push to the Ohio River to lift the siege of Vicksburg by getting between the Army of the Tennessee and Washington City.  I had occasion to speak with the general after the presentation, and inquired about the details of that proposal.  In my understanding, such a maneuver would have to get to Cairo in order to obstruct supplies or messages coming by way of the Mississippi River or the Charter Line (better known these days as the Illinois Central Railroad).  But for all his research into his character he drew a blank on Cairo.  My money would be on Admiral Porter and the river ironclads.

One presentation that drew quite well on Saturday and on Sunday was Genl Lee explaining the logic of secession, and of his decision, after much prayer, to decline command of the Federal forces and stay with Virginia. 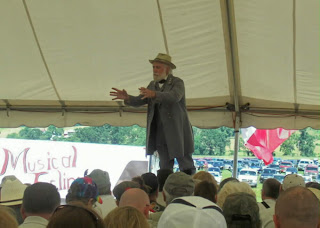 The general had been occupied, almost up to when he was summoned to Richmond to relieve Joseph Johnston, with manumitting his father-in-law's slaves, and in his understanding of the Federal Constitution, United States meant an agreement among countries that could consent to withdraw from the agreement: a nation is a state is a country, and the fact that each state was its own country was recognized by The British Crown Itself, which in the issuance of ukases in 1783 granted independence to each of Georgia and Virginia and Massachusetts and all the rest separately.  Secession had been mooted by several of the states previously, and each time a compromise had been agreed to and the agreement preserved.  Perhaps, though, the cause of separation in 1860 - 1861 was taxation, or protective tariffs, or the plain language of the Constitution, or anything but slavery.

Here, though, civil war blends into culture war.  There is much in the reasoning of Genl Lee that might appeal to contemporary factions (consider specifically any discussion of enumerated and limited powers in the federal government, and in particular whether any mid-nineteenth century Speaker of the House would dismiss a question about the constitutionality of a piece of legislation) and I fear for the future of government of the people, by the people, and for the people when many of the people have no knowledge of our greatest domestic crisis, and others have knowledge of a sort picked up piecemeal at reenactment presentations.
Posted by Stephen Karlson at 23:46