Los Angeles Union Station, which we visited in the summer of 2006, is to be rebuilt as a through station, and provided with new passenger amenities.

The platform tracks will be raised five feet, to provide clearance for the additional tracks. 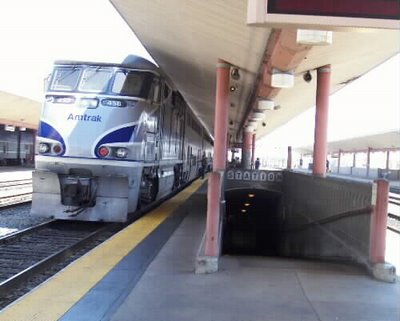 The article observes that the future of the "exquisite and long-vacant" ticket office, which I characterized as "preserved as if the nave of a church," has not yet been determined. 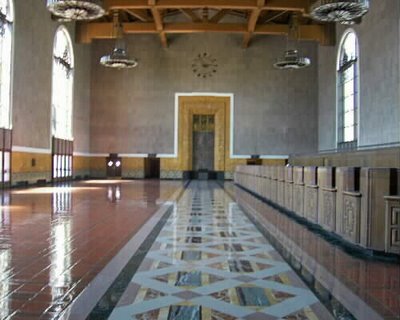 (In that picture, I believe the clock was operational, even if the room was closed off.)

What intrigues is the plan for the concourse. 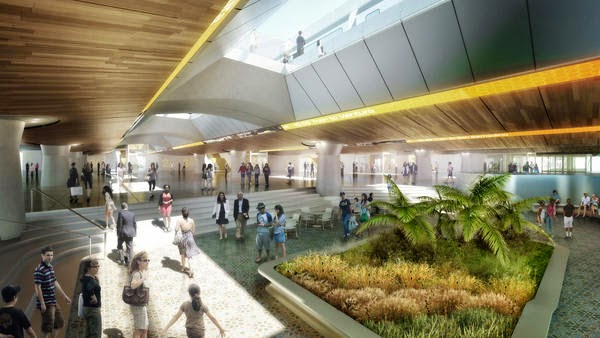 
Today passengers leave the station's historic main hall and walk past a Starbucks and a Famima market into what is essentially a very long and very low hallway, with tracks reached by stairs on either side. In the Gruen-Grimshaw plan this space would be replaced by a largely open-air concourse, with sunlight filtering in from above and large landscaped planters with benches around their edges.

Such a plan suggests broader spacing between tracks. Under-track concourses tend to be enclosed spaces because the stairs lead to the platforms, and the tracks are tightly-spaced between platforms. And reinforcing the spaces under the tracks for commercial use is expensive, thus such passages are generally spartan.

Elsewhere in the Times, the same columnist notes that the renovation introduces a Golden Age of rail travel to Los Angeles.
Posted by Stephen Karlson at 12:20