THE CASE FOR MORE ECONOMIC EDUCATION.

A recent installment of Insta Pundit's K-12 Implosion series leads to an Education Action Group Foundation discovery of what appears to be another PC atrocity, in this case the culturally unresponsive teaching of mathematics.  But one of the examples the foundation picks from the Culturally Responsive Teaching manifesto really calls for a better understanding of economics, not some new cultural competence.


Marilyn Frankenstein, in Teaching Mathematics for Social Justice: Conversations with Educators, tells a story she attributes to Marcia and Robert Ascher, in which a European explorer (presumably Francis Galton, the man who invented eugenics) agrees to trade an African shepherd two sticks of tobacco in exchange for one sheep. When he offers four sticks of tobacco in exchange for two sheep, however, the shepherd declines; the explorer later tells this story as evidence of the shepherd's inability to comprehend simple mathematical reasoning and as “proof” of intellectual inferiority on the African subcontinent. But, if sheep are not standardized units, as there is no reason to believe them to be, then doesn't it make sense that the second sheep might be worth far more than the first? And then doesn't our premise of 2 + 2 = 4 look awfully naive?

No. Numbers are dimensionless, whilst sheep and tobacco are from an n-dimensional consumption set in a real space. Once bargaining becomes involved, it's no longer simple arithmetic.  And even if the two sheep are otherwise identical, the underlying preference ordering might be one in which the exchange of two sticks for a sheep is Pareto-preferable to both traders, and the proposed exchange of four sticks for two sheep Pareto-preferable to Galton but not to the shepherd. 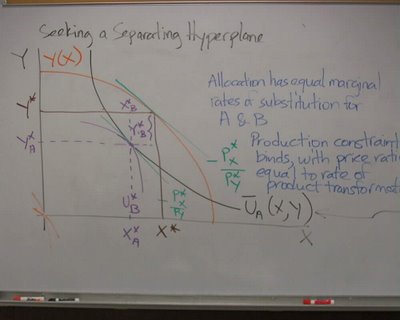 We don't have to get into planes and convexity to instill in students the notion that supply curves slope upward, thus the shepherd's reservation price for selling the second sheep might be higher, and demand curves slope downward, and the shepherd's refusal might lead, if Mr Galton is careless, into a new proposal from the shepherd, of three sticks for the first sheep.
Posted by Stephen Karlson at 10:35