CHASING THE PRODUCTIVE PEOPLE OUT.

Paul Krugman asks, "Why Can’t We Get Cities Right?"  It's a lament about city planning, I think.  You get places like Houston and Atlanta that are too untidy to his urban planner mind (Professor Krugman has done some very good work on regional economics, on his own and with regional scientists you might have heard of) whilst Manhattan and San Francisco have lots of penthouse development, with the indigent sleeping in the parks.


Houston and San Francisco are extreme cases, but not that extreme. It turns out that America’s big metropolitan areas are pretty sharply divided between Sunbelt cities where anything goes, like Houston or Atlanta, and those on the East or West Coast where nothing goes, like San Francisco or, to a lesser extent, New York. (Chicago is a huge city with dense development but relatively low housing prices; maybe it has some lessons to teach the rest of us?)

Chicago does, but the explanation for those low housing prices is a simple one: a decrease in demand. 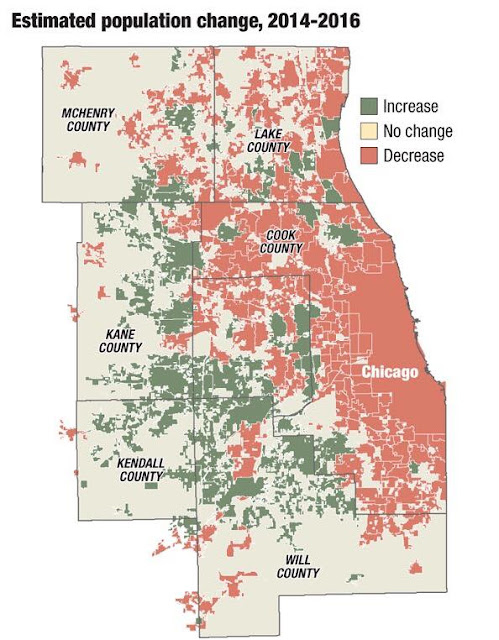 And the best the commentariat and our political masters can come up with is that further increases in taxes will be necessary to bolster the state's finances.  Note, please, that the decrease in Chicago population precedes the imposition of the sugary drink tax, which is driving grocers and residents across the county line.  (Don't get me started on how buying pop with a Link card, which is Illinois-speak for "food stamps," wipes out the tax.)

How bad is it?  Bad enough that legislators are leaving, too.


More than two-dozen legislators – about 15 percent of the General Assembly – have either resigned months into the current session or said they won’t seek re-election. They are Democrats and Republicans, rank-and-file moderates and those in leadership posts, including House Majority Leader Barbara Flynn Currie, who said last week that she’s ending her nearly 40-year legislative career when her term expires.

Trade unites and politics divides.  But forty or fifty years of politics as usual might have rendered Illinois inhospitable to trade.  I mean, when you lose a factory to Gary, Indiana ...
Posted by Stephen Karlson at 15:11