As different as [Washington, D. C.'s recent Martin Luther] King and [General and President Dwight] Eisenhower memorials are, the public’s dismay in each instance has the same cause: These aren’t the men we knew. It is not easy, of course, to make a succinct statement in sculptural form of the essence of a man’s life. It is something American art has always struggled with, especially in our chronic divided loyalty between realism and idealism. But this is the least of the problems with the Eisenhower and King memorials. They fail fundamentally as monuments, not because they misunderstand the nature of their subjects, but because they misunderstand what a monument is, or should be.

As traditionally understood, a monument is the expression of a single powerful idea in a single emphatic form, in colossal scale and in permanent materials, made to serve civic life.


Monuments and memorials today are discursive, sentimental, addicted to narrative literalism, and asking to be judged on good intentions rather than visual coherence. This change began, ironically, with a critique of the overwrought memorials of the Victorian era. In reaction, the first generation of modern architects decided that we needed an entirely different vocabulary of monuments. So when modernism went about dislodging the structures of traditional society, culture, religion, and the political and social order, it also began dispensing with the arches and columns that paid tribute to that order. This was not easy, however, because modernism was concerned with the future and monuments are retrospective.

The challenge, as we shall see, is that "good intentions" are temporally relative and emergent.


[W]e can remember that greatness is possible. For more than a century and a half, we built monuments with spectacular success. We have only been building them badly for a generation. I look at these recent designs, which are perhaps an honest reflection of our divided and uncertain culture, and can’t help but think we can do better once more.

First, though, the division and uncertainty must proceed.

Or perhaps there has always been division and uncertainty: we just haven't considered the history.

For example, did you know the entire Minnesota State Capitol is a victory monument? 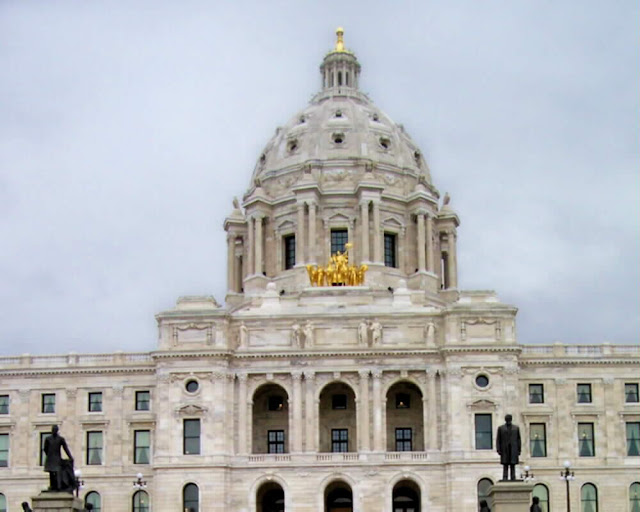 The statues are of state governors wounded in the Civil War: at left, John Johnson (not to be confused with the one from Wisconsin who works in a lumber mill); at right, Knute Nelson (who might be inspiration for Garrison Keillor's Sons of Knute?)  The figures above the frieze remind me of a group on Berlin's Brandenburg Gate, and they represent earth, air, water, and fire.  I was unable to obtain confirmation that the statues are called Eller, Larson, Page, and Marshall, but at least one person I spoke with knew the reference.

But the cladding of the Capitol was originally to be Georgia marble.  The Grand Army of the Republic, still active in Minnesota politics at the turn of the twentieth century, would not hear of it.  Minnesota was the last state into the Union before South Carolina voted to leave, and Minnesotans took a great interest in restoring the Union, oversubscribing the first call-up from Abraham Lincoln.

Walk around to the other side, near the trolley stop, though, and there's a different sort of retrospective. 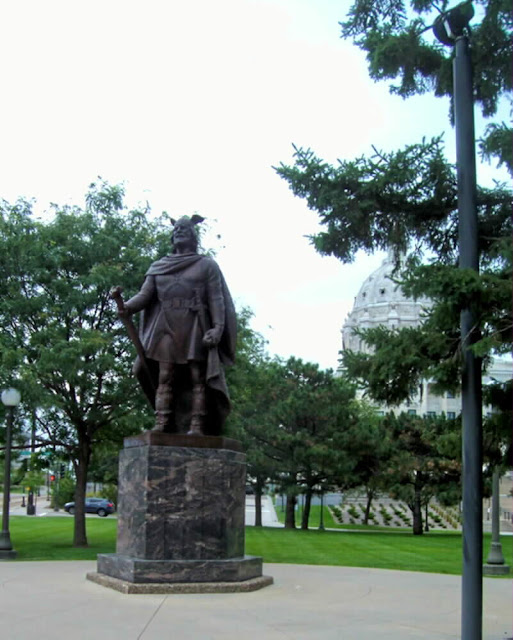 Leif Erikson, lamenting another exit from the playoffs?

This statue dates to 1947, and it was paid for by the Sons of Norway.  Identity politics did not begin with the Rainbow Coalition: it's likely that this statue (and the whole Norsemen-came-first argument) is in part a response to Italian identity politics what with the Columbian Exposition and Columbus Day, and for all I know, pizza parlors.

But John Hinderaker notes that Christopher Columbus is himself the object of a monument protest in Minnesota, and can Leif be far behind?  "When all is said and done, though, it probably is true that Prince, who died of a drug overdose, better represents Minnesota’s 21st-Century values than the most intrepid explorer in the history of the world."  Ouch.  I didn't see the Columbus statue, but I can't help but wonder if Leif isn't a rebuke thereto.

Inside the Capitol, there are other paintings and monuments, including this sculpture in the House chamber. 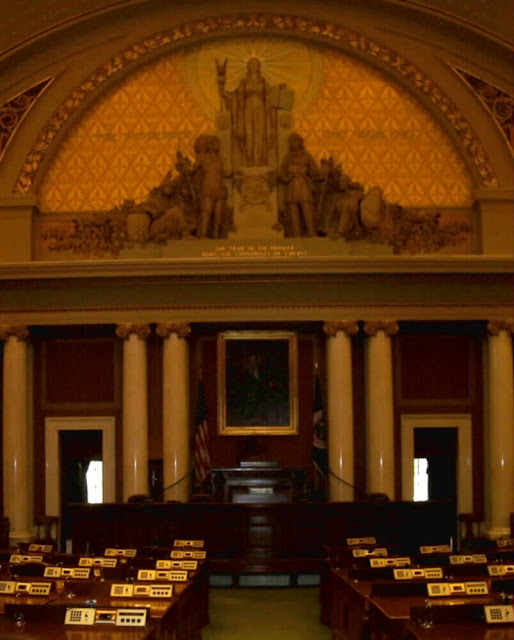 THE TRAIL OF THE PIONEER
BORE THE FOOTPRINTS OF LIBERTY.

Elsewhere, there are paintings depicting the arrival of Father Hennepin, and of the signing of the treaty of Traverse des Sioux, as well as several paintings of Minnesota regiments liberating Corinth and Nashville and Vicksburg and Little Rock and Missionary Ridge and holding the line at Gettysburg.

The treaty paintings, in particular, bother some viewers.  Here's a statement from the folder describing the public art in the Governor's Reception Room.


At the time they were commissioned for one of the new Capitol's grandest public spaces, they were meant to glorify, in what was then seen as an uplifting fashion, key moments in the history of Minnesota.

In the century since these eight works were created, public opinions have changed.  Some citizens now voice their reservations about what they consider distortions of the truth, but it is important to acknowledge the historical context in which all art is made.  Artists are influenced by the prevailing ideas of their day.  The Volk [Hennepin] and Millet [Treaty] paintings reveal early 20th-century perceptions of important events in the histories of both American Indians [c.q.] and explorers and settlers in the land that became Minnesota.

Noting the distortions of the past represented in the Millet and Volk paintings, some have argued that these works should be removed.  Others recognizing the historical context in which they were created and appreciate the paintings for their aesthetic quality.  Discussion of these two points of view continues.

Discussion is right and proper.  Vandalism is not.  Note, though, that arguments from context may not be working where monuments to the Confederacy are concerned, nor might those arguments work where Leif Erikson is concerned.
Posted by Stephen Karlson at 15:11

The Leif Erikson statue is almost certainly a rebuke of Columbus. The conflict between Italian Columbus fans and Scandinavian Erikson fans came to a head in 1892, and the latter managed to get the 1893 World's Fair in Chicago to devote a fair amount of time and space to Leif, even though the Columbus 400th-anniversary commemoration was supposed to be front and center. I can't say for sure, but I would guess that the late-1940s statue was a response to celebrations of the 450th anniversary of Columbus's voyage, albeit a delayed one, as most Americans had other concerns in 1942. I admire the era's approach to multicultural monuments for being additive rather than subtractive.

I appreciate you pointing this out! Here's another little gap in my understanding of American medievalism that should be too hard to fill in...